Hello everyone and welcome back to another post by EonTalk! Today, I’ve got another Korean Movies to Watch on Netflix content. As mentioned in Part 1, Part 2, and Part 3, one of the most frequent questions I get is where to watch Korean movies with English subtitles. This is a question that’s hard to tackle, as there are numerous factors involved, most importantly, the location you are in.

In order for those of you that aren’t in Korea and want to watch K-movies on the Korean Netflix server, you can watch these movies using a VPN service. And I’ve got a VPN service that I highly recommend: ExpressVPN!

A VPN is a tool for protecting your privacy and securing your Internet connection, and it not only protects you from possible risks, but allows you to bypass geo-restrictions! Put simply, you can be from Indonesia, Philippines, Malaysia, the US, India, or anywhere else in the world, and access the Korean Netflix! I highly recommend using ExpressVPN, one of the most recommended and trusted VPN services out there, and once you sign up for and install ExpressVPN, it’s as easy as choosing the country you want to access, and connecting! Voila! You are now able to watch content on the Korean Netflix.

If you would also like to access a wider range of Korean content, be sure to sign up for ExpressVPN using my link (click here) or expressvpn.com/eontalk, and get 49% off an annual plan, PLUS 3 extra months for free! Better yet, if you sign up and don’t like the service, there’s a 30 day money back guarantee, meaning you can cancel anytime within the first 30 days!

There’s been a lot, and I mean A LOT of added Korean content on Netflix the past couple months, so I’m sure you’ll have a blast binge-watching numerous Korean movies and dramas. The movies I’ll be recommending in today’s post will be in alphabetical order, and not by my ratings, but I do have reviews for all of these movies, so be sure to check those out for more details. Now then, let’s take a look at 10 must-watch Korean movies with English subtitles available on Netflix.

The first movie is the most recently released film, which had an exclusive release on Netflix in November of last year, <The Call>.

Directed by Lee Choong-Hyun, who had his feature film directorial debut with this movie, <The Call> is a thrilling mystery that starred Park Shin-Hye and Jeon Jong-Seo. The movie has elements of time travel and communication between time, and takes on a pretty generic topic in a very original way. Jeon Jong-Seo was absolutely amazing in this movie, and I highly recommend if you haven’t seen it yet.

Next, the #2 Korean movie available on Netflix is the 2018-released film <Default>. 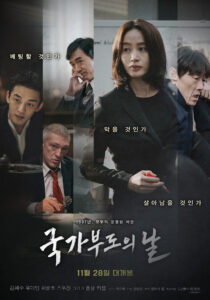 Directed by Choi Gook-Hee, who also directed <Split>, <Default> is based on real events that economically shook the nation of Korea in the 90s. The film starred the likes of Kim Hye-Soo, Yoo Ah-In, Huh Jun-Ho, Jo Woo-Jin, and Vincent Cassel, and is a very real movie with a compelling story. A definite watch I recommend!

Moving onto the 3rd movie of the list, is a movie released a couple years ago, <Extreme Job>. 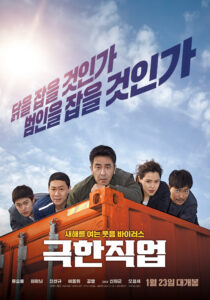 This movie was directed by Lee Byung-Hun, who also directed <Twenty>, <What a Man Wants>, and an upcoming film titled <Dream>, and is a comedy starring Ryu Seung-Ryong, Lee Hanee, Jin Sun-Gyu, Lee Dong-Hwi, and Gong Myung. The cast of <Extreme Job> and their chemistry was excellent in this film. Although I’m not the biggest fan of type of comedy this movie had, it won the hearts of many, as it not only is the 2nd highest grossing movie in Korea, but was also voted Movie of the Year on the 2019 EonTalk Movie Awards!

<Intimate Strangers> was directed by Lee Jae-Kyu, who also directed <The Influence> and <The Fatal Encounter>, and is a comedic drama that’s actually a remake of the Italian film, <Perfect Strangers>. This was one of the funniest movies I’ve seen that year, and had one of the best on-screen chemistry between the cast. Starring Yoo Hae-Jin, Cho Jin-Woong, Lee Seo-Jin, Yum Jung-Ah, Kim Ji-Soo, Song Ha-Yoon, and Yoon Kyung-Ho, I found myself literally laughing out loud throughout this movie. 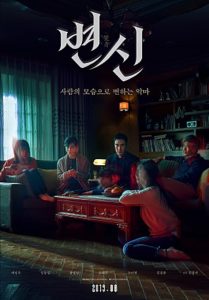 Directed by Kim Hong-Sun, who also directed <The Con Artists>, <The Chase>, and the amazing thriller <Traffickers>, <Metamorphosis> is a rare horror film that I actually enjoyed. I’m not a big fan of the horror genre, but for me to recommend shows that it’s a good horror film. The movie had the cast members Bae Sung-Woo, Sung Dong-Il, Jang Young-Nam, Kim Hye-Jun, Jo Yi-Hyun, and Kim Kang-Hoon, and if you like to watch scary movies, I recommend giving this a go. 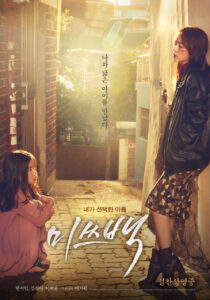 Directed by Lee Ji-Won, who I believe was in the director’s seat for the first time with this feature, <Miss Baek> is another very real movie that gets really emotional. The movie starred Han Ji-Min, Kim Sia, and Lee Hee-Jun, who all had amazing performances, and the film overall is very well-produced and has a great social message.

Starring Ma Dong-Seok aka Don Lee and Kim Sae-Ron, <Ordinary People> was directed by Lim Jin-Soon, who has an upcoming film titled <Apgujeong Report>, which also stars Ma Dong Seok. This movie didn’t have an official English title, so when I reviewed this movie, I titled it with its literal translation of “The Villagers,” but this film had a fairly good balance of humor, thrill, action, and mystery, and is an all-around movie. If you’re a fan of the Hulk-like Don Lee destroying everything in his way, then this is a must-watch.

Going into the #8 spot, the #8 movie is a movie that released last year, <Peninsula>. 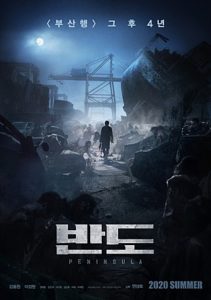 The second to last film on the list is the second to the latest film released on this list, <Samjin Company English Class>. 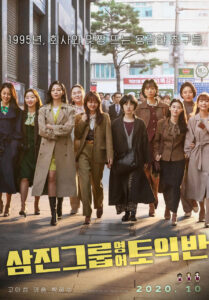 This movie was directed by Lee Jong-Pil, who also directed <The Sound of a Flower> and <Born to Sing>, <Samjin Company English Class> is an all-around film that reflects reality and social issues. The movie starred Ko Asung, Esom, and Park Hye-Soo, and had elements of comedy, suspense, and drama. This is definitely a movie that I recommend watching, especially if you like that retro-feel vibe, like <Swing Kids>.

Last but not least, the last movie of Korean movies to watch on Netflix is the award-winning film, <The Spy Gone North>. 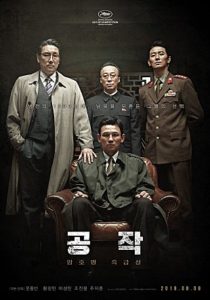 <The Spy Gone North> was directed by Yoon Jong-Bin, who also directed <KUNDO: Age of Rampant> and one of the best Korean crime films, <Nameless Gangster: Rules of Time>. The cast alone is a reason to watch this movie, as it not only had one of my favorite Korean actors Hwang Jung Min, but also other amazing actors such as Lee Sung-Min, Cho Jin-Woong, and Ju Ji-Hoon. The film was based on true events that took place in the 90s, and to be honest, the movie is on the slower side, but it’s such an informative movie and just had amazing acting performances. I’d recommend <The Spy Gone North> if you are interested in the South-North Korean relations and its pasts, and enjoy a slow but tense movie.

And that concludes today’s post on Must-Watch Korean Movies on Netflix. Remember, these movies weren’t in the order of my liking but in alphabetical order. To watch these amazing films, be sure to sign up for ExpressVPN using my link (click here) to get your special price! Also, these movies are available on the Korean Netflix at the time of recording, so mid-March of 2021. The availability of the movies may change as time goes on, so be sure to watch them before they become unavailable. If you would like another content of Korean movies to watch on Netflix, or on other ways you can utilize VPN to access more Korean content, please let me know by liking and commenting down below. Join the EonTalk Telegram group and you discuss further with me and other K-film enthusiasts regarding Korean movies. Lastly, join the EonTalk Patreon to show me your support in what I do! Thank you to everyone that read til the end, and I’ll see you guys in the next one!