Hello everyone, and welcome back to another movie review by EonTalk! Today I have the written review for the Korean film <Samjin Company English Class>.


Directed by Lee Jong-Pil, who also directed <Born To Sing> and <The Sound Of A Flower>, the director is actually an actor himself, being a cast member in movies such as <The Man from Nowhere>. <Samjin Company English Class> is a comedic drama that starred the female trio of Ko Asung, Esom, and Park Hye-Soo, as well as supporting actors Cho Hyun-Chul, Kim Jong-Soo, Kim Won-Hae, Bae Hae-Sun, David McInnis, Tyler Rasch, Baek Hyun-Jin, Lee Sung-Wook, Choi Soo-Yim, and Lee Joo-Young. The film highlights the company life of career women in the 90s of Seoul, and has a very retro, feel-good vibe right from the start. Let’s first take a look at the detailed synopsis of <Samjin Company English Class> before diving deeper into the review.

For three ladies working at a big company called “Samjin” in Seoul, their dream has always been to become hard-working, respected career women. Nevertheless, despite working 8 years at the company, they don’t receive the respect and work they deserve, being given only household works such as cleaning and making coffee for their male counterparts. Ja-Young, Yoo-Na, and Bo-Ram believe they’ll be allocated “real” work once they pass an English test that’s required for a promotion. However, when Ja-Young goes on an on-site visit to the company’s factory, she witnesses a gush of factory wastewater contaminating the water of the town. She contemplates whether to report this incident to her supervisors, and eventually does report it to the manager. However, the company tries to hide and cover up the incident. Thus, Ja-Young, Yoo-Na, and Bo-Ram tries to find evidence of the contamination, and get to the bottom of the incident.

First, as mentioned in the intro of the video, <Samjin Company English Class> starts off with a feel-good vibe. It’s very retro and really reflective of the time the movie is set in. I very much enjoyed how it was able to give the audience a very light and happy feeling from the start, and also how the first 10~15 minutes or so was like a recap of the trailers, so that those that haven’t watched all the previews can get a grasp of what the tone and narrative of the movie will be.

Furthermore, I thought that casting of the film was done superbly. The 3 main leads were very cute and funny, and all fit their roles very well. Ko Asung played Ja-Young, who’s a character with great leadership skills, Esom played a tomboyish role that’s a girl crush, and Park Hye-Soo played a mathematical genius that has a very cute personality. And I thought it was Park Hye-Soo that really killed her role. She was absolutely adorable, and gave numerous humorous scenes with her expressions. Park Hye-Soo is actually a singer-turned actor, first appearing on the singing survival show “Kpop Star Season 4” back in 2014. I was pretty surprised to learn of this fact, and am very much looking forward to her future works. 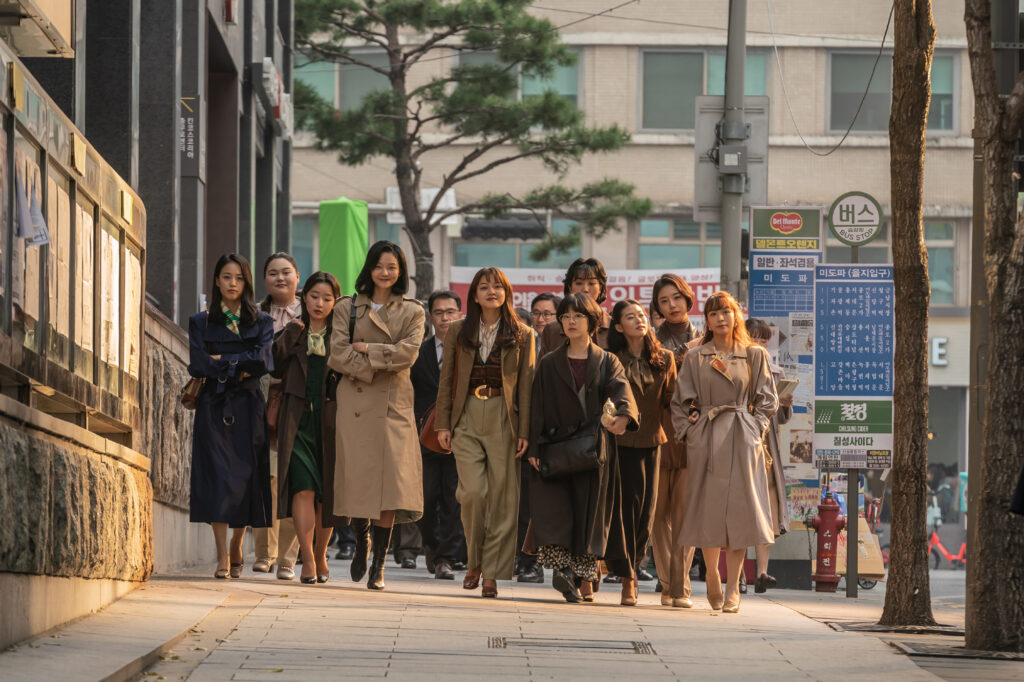 Moreover, <Samjin Company English Class> was an all-around film. It had humor, thrill, mystery, and drama, and also had a very real aspect. The movie takes place in 1995 Seoul, and you can see how much work life has changed throughout the years in Korea. The female workers at “Samjin” are tasked with simple works, such cleaning and making coffee, that are essentially not business-related. They do not receive the respect they deserve compared to their male counterparts, and showed the hardships females had to face in the workforce back in the days. This may still exist today, but it’s definitely not to the same extent as what it once was, and we can feel as an audience how important the changes that happened are in our society. Of course, it still isn’t perfect and there’s still more change that needs to be made, but through the film we were able to see that we’re headed in the right direction.

The first downside of the movie that I found was that the story was kind of all over the place. It opens up a lot of different possibilities that it’s hard to keep up at times, and you wonder why they included, or didn’t include at times, certain pieces. Also, the movie is overall a little cliche, and as it gets past the halfway mark or so, gets a little cringe and forced. The ending is also pretty cheesy.

Next, this is something that I mentioned quite often in my reviews, but the English acting was bad. This only applies about halfway with <Samjin Company English Class>. Bad English acting in Korean movies that I mention can go two ways: English actors having poor acting performances, or Korean actors not able to naturally act in English. With this movie, it’s the former. The Korean actors actually were pretty natural, as their roles were of characters that aren’t fluent in English, so the performances were adequate. In other movies, they try to portray characters that can’t speak English as fluent speakers, so it comes off very, very poorly. The foreign actors in <Samjin Company English Class> were bad as usual, in terms of acting, and it just took me away from the film when they came on. Like come on, is that the best you can do in casting foreign actors? I will say, though, that it’s not all the foreign actors. For example, Tyler was pretty good.

And lastly, the CEO of “Samjin” is a foreigner who speaks English and can’t really speak Korean, but it doesn’t really make sense how he talks to the employees in English, and the employees speak in Korean. So Billie, the CEO, speaks in English, and the employees speak in Korean, but they are able to communicate without any problem. This logically doesn’t make sense, as they use business terms that definitely aren’t terms that common people that don’t speak the language will know, but they understand everything. This is a small detail, but it’s small details like this that can add up. 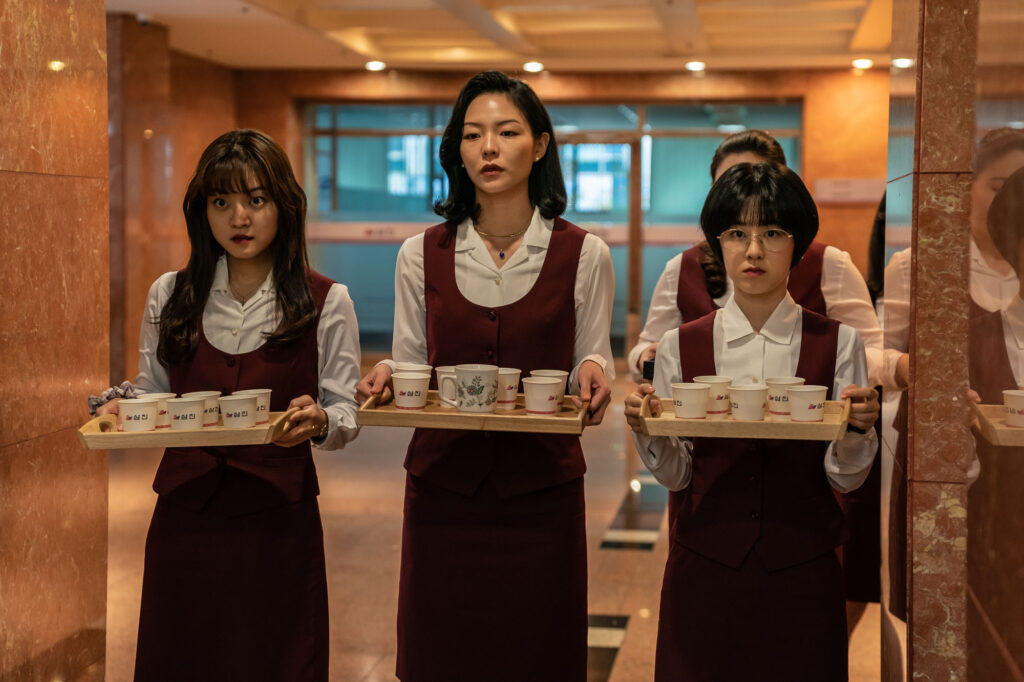 <Samjin Company English Class> is an all-around film that reflects reality and social issues. With elements of comedy, suspense, and drama, this is definitely a movie that I recommend watching. It is a little cliche with its story, but still a good movie overall. If you like that retro-feel vibe, like <Swing Kids>, this is the movie for you.