2019 seems like a year full of laughter, as we’ve been gifted with 6 movies with comedic elements just in the month of January. And amongst these comedies, there were a lot of positive feedback surrounding <Extreme Job> following its early pre-screenings. Many critics claimed it was one of the funniest Korean films in recent times; that it has humor unseen in other movies. While I do agree with the latter (though not necessarily a positive), I have to strongly disagree with the former.

<Extreme Job>, which is the literal translation of the Korean title, was directed by Lee Byung-Hun. No, not the A-list actor. This Lee Byung-Hun is a director that has had previous directorial works such as <What a Man Wants> and <Twenty>, as well as production experience in films like <Love+Sling>, <Love Forecast>, and <Sunny>. As you can see from the few examples of prior productions he was a part of, Lee Byung-Hun’s main focal genre has been comedy. Thus, combined with the praise the film has been receiving, my expectations of the movie naturally increased. While I originally gave this film an expectation score of just 3/10, I’d say my anticipation grew to about 6, or maybe even 7, right before going into the movie.

However, <Extreme Job> did not succeed in gaining my acclamation. In fact, I’d consider it one of my least favorite comedies of recent Korean cinema. Despite having a very competent cast of Ryu Seung-Ryong, Lee Hanee, Jin Sun-Gyu, Lee Dong-Hwi, and Gong Myung, as well as seasoned actors such as Shin Ha-Gyun, Oh Jungse, and Kim Eui-Sung as supporting cast members, the film felt highly forced and unnatural.

Sell chicken by day, stakeout by night. After working there butts off, doing whatever they must do to catch criminals, the ‘Drug Team’ still fails to arrest their targets. They now face the brink of disbandment. This last mission of capturing the international organization responsible for trafficking drugs into Korea is the only chance they have of surviving. Thus, the 5 members of the team stakes out every day at a chicken restaurant in front of the illegal organization’s office. Eventually, they end up buying the shop to spy on the drug smugglers. The thing is, word of mouth catches on and the chicken restaurant becomes massively successful!

<Extreme Job> was a very light comedy and very different from other humorous films of recent, as I mentioned in the beginning. This can be seen as both a good and bad thing; a lot of people enjoyed this type of comedy. I’d say it’s similar to the Korean comedy show “Gag Concert,” in that the jokes and comedic scenes were more like a sketch and skit. However, I wouldn’t say it possessed the necessary components to make it a great film. Nonetheless, there were parts and pieces that were humorous and had me chuckling (especially in the beginning).

Furthermore, there were surprisingly good action scenes! The fight scenes were well-choreographed, and blended well with the amusing tone of the movie. It didn’t overdo the action so that it takes away the comical element, but rather complemented it.

Frankly speaking, I feel like <Extreme Job> had more negatives than positives. I know a lot of people enjoyed it, but hear me out. Majority of the comedy it had felt extremely forced and unnatural. The “humor code” it had contrasted what I consider funny. I personally believe I enjoy both “American” and “Korean” humor (e.g. <The Hangover> and <Intimate Strangers> are two comedic films I highly appreciated). But there’s a specific type of Korean humor that simply doesn’t resonate with me. While the rest of the audience were laughing, I found myself puzzled at how they find that funny. There were a lot of wordplay used for comedy, and it’ll be interesting to see how they go about the English subs for the film.

The movie didn’t have purpose. I found myself lost at how misdirected the narrative was. Sure, the idea is funny. A team of cops running a chicken shop while they’re undercover. But there were no underlying messages I took away after watching. 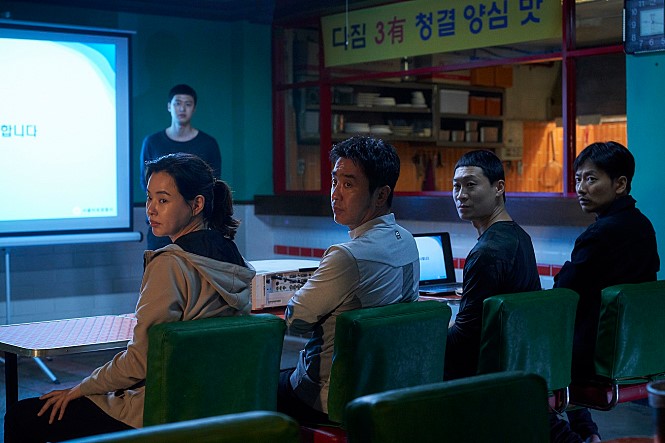 <Extreme Job> had a very different tone of comedy than what we’ve seen recently. Whether that’s a good thing or a bad thing ultimately depends on personal preference. I myself did not like the humor code it had, and do not recommend it. I’d much rather recommend the other comedic films released this month, such as <Inside Me>, <Rosebud>, or <MALMOE: The Secret Mission> (although the last isn’t labeled as a “comedy,” I found it way funnier than <Extreme Job>).