“Who cares if half of the people on earth are girls; it’s not you…”

<On Your Wedding Day> is classified as a drama genre, and if you’ve seen the trailer for it, that’s probably what you’d be expecting before watching. Yes, it technically is “drama,” but it’s so much more than that. It is the best comedic film out of Korea I’ve seen thus far this year. And thank God, cause there hasn’t been much good comedy in Korean cinema this year. With a very relatable story and frequent “lol” moments, this movie had me smiling throughout its duration.

Put together a great story, an amazing cast, unforgettable humor, a dash of emotions, and a sprinkle of surprise, and you get <On Your Wedding Day>. Directed by Lee Seok-Geun, who was on the production team for <The Outlaws> and <The Bros>, the film went above and beyond my expectations, having me smiling like a teenage girl from the beginning till the end. Park Bo-Young is the main female lead, and Kim Young-Kwang is the lead male actor, and both were excellent in portraying their characters. I wouldn’t be surprised if ‘Dispatch’ releases an article claiming the two are actually dating in real life after this film.

Turn back the clock to when you first fell in love. Do you remember the emotions you felt? Can you hear your heart beating as if it’ll burst out of your chest? That’s how Woo-Yeon felt when he first met Seung-Hee for the first time in the summer of 2005. After desperately following his first love around, the two finally start dating. But not for long. Woo-Yeon suddenly receives a call from his first love, telling him to be well, and disappears. A year later, with all hope lost, Woo-Yeon sees Seung-Hee on a brochure of a university out of sheer chance. That’s when he sets his mind and determines to study his ass off to get accepted into the same school as his first love. A year of sleepless nights and endless studying later, Woo-Yeon is admitted into the college. However, he finds out that the love of his life has a boyfriend… And that’s just the start of time and fate’s cruel play of trickery.

Where do I start… I think I loved everything about this film. And “The Bad” parts, if you can really call it that, were far and few between. First, the many funny scenes throughout the film that were actual “LOL” moments and were fantastic. I don’t want to spoil anything for potential viewers, so I won’t give any details. But just know that the humor in this film was exceptional and the great acting made it that much better.

And speaking of the great acting, the cast and their performance was outstanding. Like I mentioned before, Park Bo-Young and Kim Young-Gwang had excellent chemistry, and I wouldn’t be surprised if they actually fell for each other while filming (like Song Joong-Ki and Song Hye-Kyo). Kim Young-Gwang’s acting was phenomenal, and Park Bo-Young was downright adorable. Boys, get ready to have your hearts melt.

Also, if you’ve seen the K-drama <Oh My Ghost>, I think these two pieces of work have a lot in common. First, the obvious, the main lead is the same (Park Bo-Young), and the supporting actor from the drama is also a supporting cast member on <On Your Wedding Day> as well, Kang Ki-Young (he just gives a happy vibe in everything he’s in). Also, the mood of the two works is quite similar as well, in my opinion. The stories aren’t akin, but the tone of the productions, with great humor and storytelling in general, were mutual.

Furthermore, it was very relatable to everyday life; more specifically, to the Korean high school/college life. It may have not been as engaging if I didn’t go to school here in Korea, but I finished my senior year of high school and also went to university in Korea (shoutouts to Kyung Hee University woot woot!). The teachers hitting the students in high school is unforeseen nowadays, thank God, but I was in one of the last years of when that culture was still in existence. Imagine how shocked I was after coming from the States. Inconceivable… But scenes like that and jumping the fence to skip class to go eat ddukboki were routine, and it was a great nostalgic road down memory lane. And it had great depiction of college life and moving onto adulthood, which I’m currently going through. All in all, it was very relatable and I could fully understand what the main character was going through. 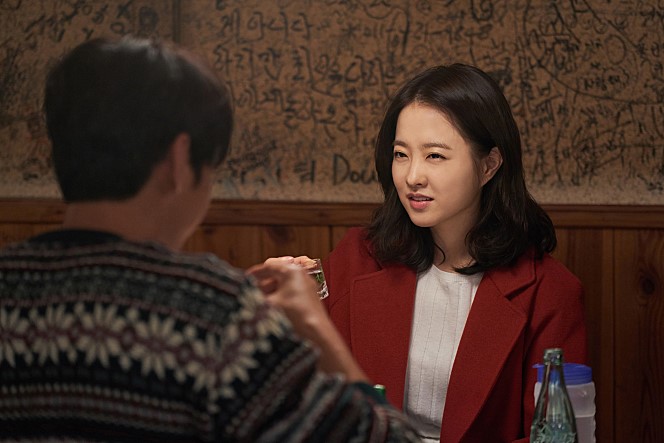 Another great aspect of <On Your Wedding Day> was its real-life illustration of love relationships. From the moment you fall for someone the second you see them, to the butterfly flutters when you first go out, and finally to when the burning fire starts to cool as you start seeing the flaws you didn’t see before, the film perfectly depicted what everyone that went through a relationship and breakup probably experienced. I think this is the first movie after <Very Ordinary Couple> that near-perfectly portrays a love-breakup relationship. The plot was very entertaining and so engaging that I didn’t even realize the movie was nearly 2 hours long. I don’t want to give any spoilers away, but let me just say I enjoyed how the story concluded.

I don’t think I have any real negatives about the movie that takes away any significance from the film. But if I were to be really nitpicky and hair splittingly critical, I would say there weren’t much sad/emotional scenes. I mean, there were parts of semi-melancholy, but no real tear-generating scenes. However, I don’t really enjoy those kinds of movies anyways, and I’d prefer this over a movie that tries to force the tears out of its audience, so I don’t think this is a very big negative, if at all.

Another nitpicking critic would be how it ended. I mentioned I enjoyed the way the story concluded, which I very much did, but if it would’ve given slightly more, I think it would’ve made an even better story. Again, not really much of a “bad” thing.

Finally, this doesn’t have to do with the movie itself, but I don’t think the trailer does the movie justice. From the preview, I thought this would be just an ordinary, generic love-story drama film. But this was far from that.

I really really hope this is shown in theaters overseas and gets more attention. If you liked dramas like <Oh My Ghost> or <Let’s Fight Ghost> (no, the movie has nothing to do ghosts), or movies like <Very Ordinary Couple> or <Architecture 101>, I’d highly recommend you go and see <On Your Wedding Day>.