“The old are people too; we can see and hear like everyone else…”

Korean cinema has come a long way the past several years. Not only has the quality of the films enhanced dramatically, but distribution has improved as well so that more people can watch more K-films on a larger scale. I remember a few years back there were only a handful of Korean movies on Netflix. Now there are so many available on the streaming site, and the list keeps getting updated. That being said, not all of the movies on Netflix are great. There are amazing Korean blockbusters that are must sees, but then there are films like <The Chase> that just aren’t worth the watch. Let me explain. 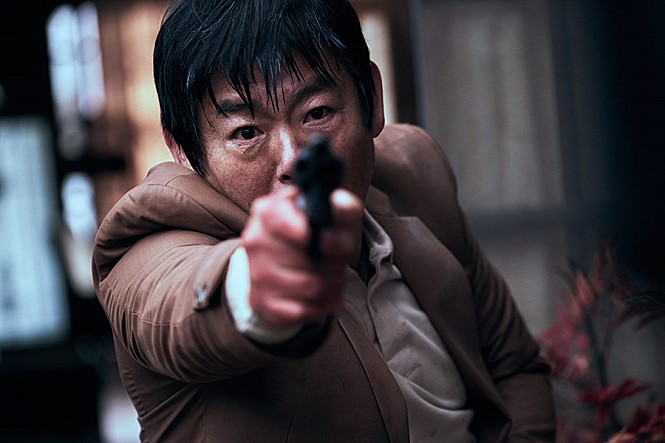 <The Chase>, not to be confused with the amazing 2008 film <The Chaser>, was directed by Kim Hong-Sun, and is based on a popular webcomic called <Aridong’s Last Cowboy>. It features veteran actors Baek Yoon-Sik and Sung Dong-Il (both great actors as well). Just looking at the cast and director, it’s understandable you would think this movie would be incredible. I also had high expectations and great anticipation for the film. However, the outcome couldn’t be more different. The movie, which is shown as an action crime thriller in the trailer, is about two elderly men trying to catch a serial killer that’s back at murdering after 30 years. The synopsis is as follows:

A series of murders are occurring in a quiet neighborhood. But this isn’t the first time a chain of killing has occurred in this area. 30 years earlier, a serial killer that was never caught murdered in the same fashion as the present murderer: First targets the elderly as practice, then shifts his cursor towards young girls. Shim Deok-Su, a resident and owner of the apartment complex where the crimes are taking place, and Park Pyung-Dal, a former detective that was assigned to the previous murder case three decades earlier, team up to catch the criminal. The duo is determined to catch the fugitive this time.

I’ll be completely honest; I don’t have much good things to say about this film. As a matter of fact, I find it difficult to find good elements of this movie… The director and the cast members are talented individuals that have proved to be amazing before. However, they didn’t show their true potential in this film.

One good aspect of the film was its message. The main roles are the elderly, and at one point in the movie there is a quote along the lines of, “The old are people too; we can see and hear like everyone else.” It sheds light on the older generation in our society, and how they are suppressed by their surroundings. Furthermore, it was refreshing to see the elderly take the lead roles in an action thriller for a change, as this is unseen in Korean films.

The trailer for <The Chase> shows an action-packed, thrill-driven criminal movie and paints a great story of the film. But the trailer is just about the only good thing about the <The Chase>, which is really sad. Furthermore, the trailer showed too much, if you ask me. If you’ve watched the trailer, then you’ve basically watched the first 30 minutes of the film. Also, because the preview showed so much, the movie was too predictable. The story was easy to foretell, and there weren’t any jaw-dropping plot twists or amazing storylines. I felt like it was too generic, and I’ve seen the story from somewhere before. Moreover, as the movie progressed into the later parts, the film just became really, really unrealistic.

In addition, the movie lacked identity. I felt like it was trying to do too much by adding elements of comedy, action, thriller, suspense; and I don’t think they got a single one of those down. There were sprinkles of chuckle moments, but no real humor; action scenes, but were unrealistic; and thrill and suspense that ended before it reached its height. I feel like it knew the ingredients that makes up a good film, but the mix wasn’t right and ultimately failed to bring out its true capabilities. And the cinematics were so-so; it was okay, I guess, but it seemed like the production was closer to K-dramas and not on the level of a motion picture.

I don’t want to hate on the film because it has such an amazing lineup and I know the potentials of the director and actors. However, I think the movie was less-than mediocre and only showed about 10% potential of the director and actors. Kim Hong-Sun directed the 2012 smash hit <Traffickers>, which was an incredible film. However, do not expect anything close to that critically-acclaimed film.

Furthermore, it was the worst performance I’ve seen of the main actors. There are a lot of people saying the acting was really good, and the chemistry between the two leads was amazing. However, in my opinion (and I know a lot of people may be butthurt about me saying this but…), this couldn’t be any more untrue. Baek Yoon-Sik is a respected actor in Korean cinema, and although he isn’t a preferred actor of mine, his appearance on <Tazza: The High Rollers> was phenomenal. So much, in fact, that I can only see that image of him when I see him on the big screen now. However, his acting in <The Chase> didn’t seem genuine or authentic, and I feel like it was a bad choice on the casting team’s part.

In addition, Sung Dong-Il doesn’t fall any short in his ability to perform as well. His range of characters he can portray is unbelievable. From being humorous to emotional, to serious and silly, he is definitely on the list of most-respectable actors of mine. Yet, I think the character of Park was just downright unfit for him. It felt like a kid trying to pull off his father’s suit. And because I know how great these actors and the director can be, I was even more disappointed in <The Chase>.

There are so many great Korean films on Netflix and online now. Don’t waste your time on this.