“If I’m the only foolish person in the world, isn’t that a good thing?”

<Dark Figure of Crime> was one of my most anticipated films of the second half of 2018, and I had the amazing opportunity to attend the pre-screening and main cast meetup of the film. It was awesome being able to see the movie two weeks prior to its official release, as well as Kim Yoon-Suk and Ju Ji-Hoon in person. I first saw the trailer for <Dark Figure of Crime> late August,  and I was instantly hooked. It looked exceptional, and I was definitely hyped for it. After watching, I was thoroughly satisfied, and would even go as far as to say it’s one of the best recently-released Korean films. 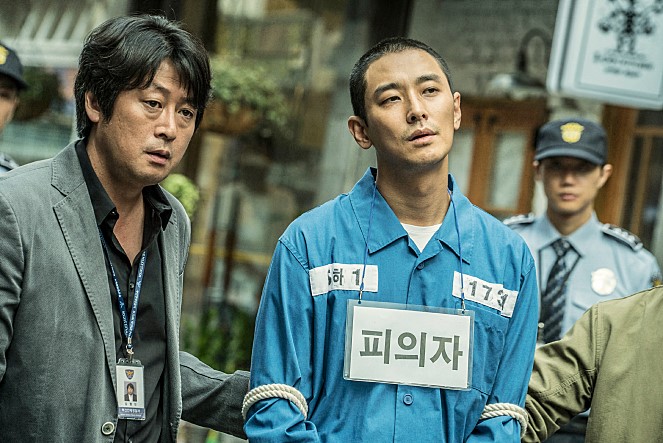 Based on a true story, <Dark Figure of Crime> revolves around a serial killer who suddenly confesses his crimes from within prison bars. The case of which the movie is based on is an ongoing one from 2010. The film was directed by Kim Tae-Gyun, who does not have any other films I have seen, and features an astonishing main cast of Kim Yoon-Suk and Ju Ji-Hoon. The film is set to have its wide release on October 3rd 2018, but I had the chance to see it 2 weeks prior at its pre-screening.

With less than 10 days left until its official release, some issues regarding the movie has sprung up. As I mentioned before, the film is based on real events; however, apparently the movie was made without the consent and approval of the bereaved. The family of the deceased are demanding the film to be pulled and not be released, and a national petition has even been made. Surely, the production crew must figure this out within the next two weeks.

There are numerous murder cases where no reports have been filed, bodies have been found, or investigations have been made; numerous victims, gone from this world without a trace. Kang Tae-Ho, who’s already locked behind bars, confesses to Kim Hyung-Min on additional killings he has performed. “Seven. A total of seven people. The people I killed.” Hyung-Min trusts his intuition and believes Tae-Ho’s confession of the additional homicides. He starts investigating the list of seven murders, trusting all of Tae-Ho’s words. However, he soon realizes Tae-Ho has been manipulating him, mixing truth and lies to trick the system into getting his ways. Without any hard evidence and the statute of limitation nearing, Hyung-Min must find a way to put away the Dark Figure of Crime for good.

The movie had phenomenal acting by the main cast. Kim Yoon-Suk’s acting was great as usual, and he was amazing at portraying the detective role. It lived up to his performance on <The Chaser>, which is deemed by many as the best Korean thriller of all time. But what stood out to me more was Ju Ji-Hoon’s depiction of the psychopathic serial killer. His performance was extremely believable, and it was as if he was actually crazy/psychotic. It was absolutely chilling. This was Ju Ji-Hoon’s 3rd role this year, with <Along with the Gods: The Last 49 Days> and <The Spy Gone North> being the other two. As I mentioned in the <The Spy Gone North> review, I didn’t like his acting in it; I thought it was ingenuine and he didn’t really fit the role. However, with this he killed it. It was his best performance thus far in my opinion. All in all, amazing acting by the two main cast.

There were several humor points that kept the film from being too dry and serious, which I highly appreciated. With movies like this, if the humor appeal isn’t on point, it’s better to just leave it out and have it be a serious-toned feature all around; better to have a darker movie than to have sprinkles of cheesy, corny lines. However, the comedic elements of this film were satisfactory and had the audience laughing when it came on.

I believe <Dark Figure of Crime> attempted at and succeeded in bringing something new to Korean cinema, and subsequently brought Korean films onto a new level. It broke new grounds with its characters and story that were unseen in previous Korean movies. The characters were new and original; the victim role (Tae-Ho) was new in the sense that while almost every other Korean crime film have the victim running away from the cops, being very secretive, the victim in <Dark Figure of Crime> was actually going towards the authorities, providing hints and confessions at his own will. Furthermore, the craziness of the character was unseen in other Korean films – this is all credited to Ju Ji-Hoon. I’ve even seen the character being compared to as the “Korean Hannibal.”

As for the detective role, it was also original in that he wasn’t the typical “poor, despised, lower-class figure” that other Korean films usually have the cop as. He was respectable, just, well-off, and intelligent. Moreover, the story reflected on the downsides of the Korean judicial system, which is common in other films, but it had new elements in that it showed a real, honest way of how the system can be corrupt, manipulated, and tricked. And the fact that this was based on a true story and actually took place made it that much more authentic and credible. 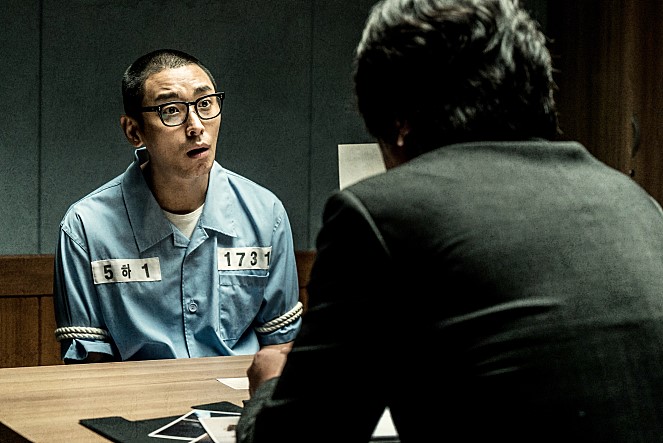 The film had various hidden messages and references scattered throughout the film. There were a few that I didn’t even realize until I left the theater, and thought about it more on my way back home. To give an example without spoiling the story, while/after watching the movie, think about the “washing machine” scene later in the story, and what that scene was about. I believe there still are a lot of messages I have not figured out/did not see. You need to think throughout the film to comprehend what’s going on, like understanding the characters playing mind tricks on each other.

Lastly, the movie was just shot amazingly. I loved its cinematography and the tone it had. Much respect to Kim Tae-Gyun, the director. Will definitely look forward to his future works.

One downside of the movie is that it gets slightly slow in the middle. The film doesn’t have much action, and involves a lot of thinking and engagement (which isn’t necessarily a negative). This can get a little tiring for some, and it may lose the audiences’ attention in the middle. However, it does pick up again pretty quickly. The story wasn’t the best, but it was still an interesting one, nonetheless (the actors’ performances are really what made it such an incredible film). And keeping in mind that it was based on true events makes it even more compelling. My point is, the story can get a little slow and tiring, but the main casts’ acting makes up for it. 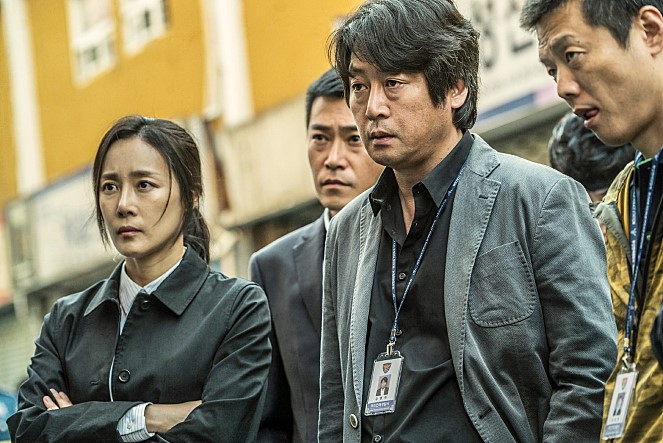 Another critical negative of the film was its conclusion. Without giving away any spoilers, the ending was disappointing, but in a way that’s inevitable since it was based on a true story. Like I mentioned before, the characters play mind tricks on each other, and you as a viewer think throughout the film on what’s going on and how it’s going to conclude; you expect a great ending/twist. But it wasn’t that satisfying… This was the biggest dissatisfaction I had with the film.

One of the supporting cast members was Jin Sun-Kyu. He was absolutely marvelous in <The Outlaws>, and really got his name out with that production. When he came on screen for <Dark Figure of Crime>, I was very happy to see him and glad to see that he was getting more recognition and parts. However, despite wanting him to do well, his performance just wasn’t that good… Maybe because his role in <The Outlaws> was so memorable and strong, but it just didn’t seem like he fit the character in <Dark Figure of Crime>. I sincerely do hope that he finds a better fit and finds his place in more productions, though. 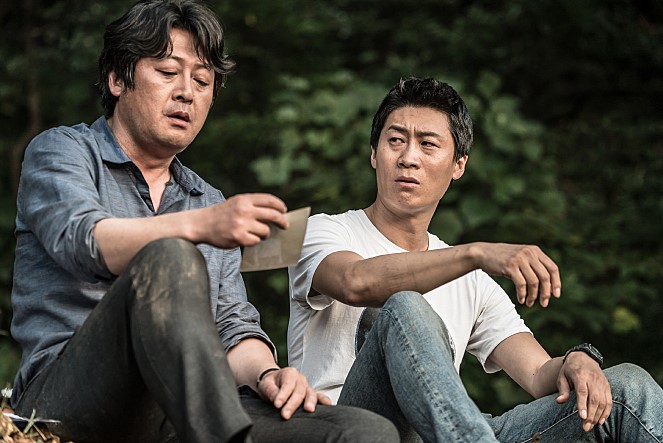 This doesn’t have to do with the movie itself, per se, but the controversy around the story not having the approval and consent of the deceased family is something I think that will either make or break the success of the film. There are petitions being run due to the production not having the consent of the bereaved. There are two main ways this controversy can end: (1) They don’t say anything and just proceed with the release, which in case outrage and negative feedback will flourish from the public. (2) If they do pull the film, a huge waste of investments in terms of time, effort, and money would go down the drain, not to mention one of the best movies of the year not getting its recognition.

Nonetheless, the movie itself has been getting major free publicity through this issue; and as they say, there’s no such thing as bad publicity. It has been one of the most searched topics on Naver, and its going semi-viral on social media. What I personally think is that if they do go through with the release, then it’ll potentially receive more ticket sales than if the controversy had not happened. More people are now interested in the film and are more likely to go watch in theaters.

However, if they really want to fulfill the main purpose they were going for, which is shedding light on the unsolved murder cases and giving tribute/respect to the deceased, they need to address and solve the issues with the families of the victims before the release. It’ll be interesting to see what takes place in the next couple weeks leading up to the official release, and how the producers will respond to the issues. I sincerely do hope they can come to an agreement with the families, and receive their blessings. 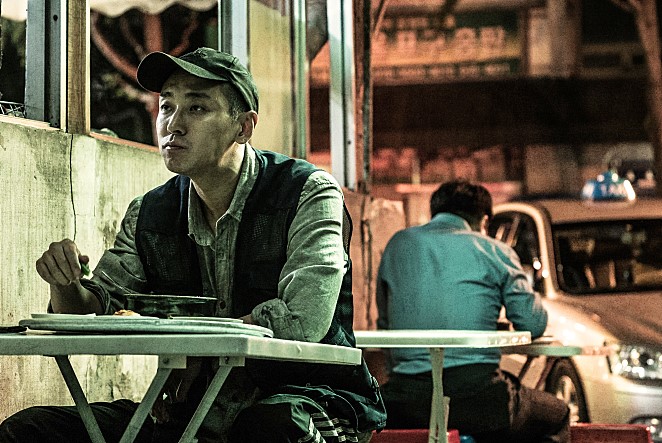 The rating of <Dark Figure of Crime> on Naver is currently 5.7/10 as of writing, which definitely is significantly less than what the film is worth; the controversy has got to have had a negative effect on the ratings given by the public. Nevertheless, I expect the rating to go way up after October 3rd.

This was one of the best Korean films I’ve seen this year, and the utmost performance by Ju Ji-Hoon. I felt that Ju Ji-Hoon finally found his place and role in the industry with the Tae-Ho character. I’m probably going to watch this again once it has its wide release, as there are still many points and messages left for me to uncover. And I don’t think it’d be a waste of money to see it twice.