Right off the bat, if you haven’t seen <Along with the Gods: The Two Worlds>, which is the prequel to this movie, then I highly suggest you go and watch the first film before watching this one. This is because even though I have seen <Along with the Gods 1>, it’s been over half a year since, and I had a hard time keeping up with what was going on in the beginning. I’m not sure if I would’ve understood the movie in full if I hadn’t watched the prequel. That being said…

<Along with the Gods: The Last 49 Days> did tremendously well in the Korean box office on opening day, with over 1.23 million people watching on August 1st. This broke the previously held record of 1.18 million by the Hollywood film <Jurassic World: Fallen Kingdom>. Directed by Kim Young-Hwa, who also directed the critically acclaimed films <200 Pound Beauty> and <Take Off>, <Along with the Gods 2> features a spectacular main cast of Ha Jung-Woo, Ju Ji-Hoon, Kim Hyang-Gi, Don Lee, and Kim Dong-Wook, with just as an amazing supporting cast like Lee Jung-Jae. <Along with the Gods 1 and 2> are both based on the webcomic series by Joo Ho Min.

Over the past 1000 years, the three afterlife guardians, Gang Rim, Hae Won Maek, and Duk Choon, have successfully reincarnated 48 dead spirits. They must reincarnate one more for them to also receive a new life. However, the lead guardian unexpectedly chooses Kim Su Hong, a soul that had an unfair death, as the trio’s last spirit. However, according to the afterlife-laws, a soul which has had an unjust death must dissipate, without trial. Nonetheless, one of the Kings of the underworld accepts Gang Rim’s offer, but with a catch. The catch is, the three angels of death must bring to the afterlife an old man that’s past his death day before the trial of Su Hong is over. However, the old man is being protected by the ‘God of House.’ While the leader goes through the Trial of the Hells with Su Hong, the remaining two of the afterlife angels goes to retrieve the old man. Yet, when the duo gets to the old man, they find the God of House to be extremely strong and undefeatable, and while being helplessly beaten by the God, the two guardians find out that the God of House was the afterlife guardian that brought the duo into the underworld. The two starts getting more and more interested in the story of how they died, and makes a deal with the God of House. The story of life and death, past and present; the 1000-year secret will be revealed!

Definitely the casting. From the main cast members, to the supporting cast members, the lineup of actors and actresses was phenomenal. Each and every one of the casts fit perfectly well with the characters that they portrayed, especially Don Lee (the Korean version of ‘The Rock’). Also, the child actor, Jung Ji-Hoon, that played the grandchild showed great talent and potential in acting, radiating joyful and heartbreaking emotions.

The story was highly creative. Although there are many negative criticisms saying that the plot of the movie was too different from the original of the webcomic, I personally enjoyed the adventure <Along with the Gods 2> took me on. And the imaginative ‘hells’ that the afterlife had was also very creative, showing how brutal hell could be. I also thoroughly enjoyed the ending, where everything unfolds, but I won’t spoil it for you 😉

The first <Along with the Gods> had celebrated response due to its ability to take the audience on an emotional roller coaster ride. I remember people left and right, front and back of me were all crying during the latter scene. However, this did not live up to the first movie in the sense of “emotions.” This isn’t necessarily a negative that diminishes the film, in my opinion, but if you are looking for the same emotional ride as the first movie, you may be disappointed.

As mentioned before, a lot of people are saying the movie is too different from the webcomic. I personally have not read the webtoon, so I am unsure of how true this is. I thoroughly enjoyed it, nonetheless.

Also like I mentioned before, if you have not seen the first movie, you may have a hard time understanding what is going on. Su Hong appears in the prequel, and the first movie shows how Su Hong died. Therefore, if you want to grasp the story of the film in full, I, once again, highly suggest you go and watch the prequel first.

Lastly, there are numerous Korean history and traditional culture references. As I grew up and lived most of my life in the United States, I am not very familiar with the Korean history and traditional culture. Therefore, I had a hard time understanding the terms like “God of House” and “Afterlife Guardians,” and the scenes from like Goryeo Dynasty. However, I was able to understand the overall story of the movie, and even though I didn’t understand every terms and references, it didn’t take too much away from the enjoyment I had while watching. 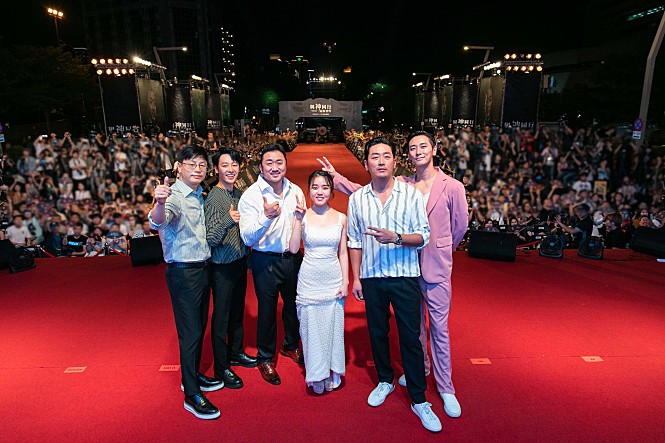 Worth the watch, and one of the better Korean movies released in 2018, but I don’t think it lives up to the ‘opening box record’ hype.