I’ll be completely honest. I had absolutely no interest in this film prior to watching it. I remember going to watch <IT> in theaters last year and seeing the poster for <I Can Speak>, and thinking it’d be just another generic, sob story that tries to bring out the tears in its viewers. And watching the trailer, I didn’t see anything special about it. Furthermore, I had no friends telling me how great it was, since none of my colleagues saw it either. However, I, once again, learned that you shouldn’t judge a book by its cover (or in this case, a movie by its trailer). Majority of the time, the trailer is a poor representation of the film; and that goes both ways for good and bad movies. A mediocre film may have a great trailer that induces excitement, whereas a trailer for an amazing film may not be able to summarize the greatness of a movie. <I Can Speak> falls in the latter, and the trailer only depicts a small fraction of the film. 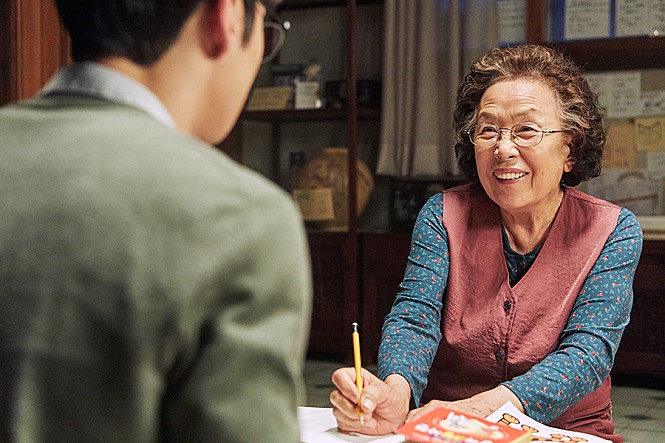 Directed by Kim Hyung Seok, who also directed <C’est Si Bon> and <AM 11:00>, the feature film won several awards, including the audience award at “The New York Asian Film Festival” and the director’s award at “The Blue Dragon Awards.” Prior to this, the director didn’t have much great accomplishments, and that’s probably one of the reasons why I didn’t have high expectations for this movie. However, the main cast were the total opposite; Korea’s veteran female actress Na Moon-Hee is the main lead actress, alongside Lee Je-Hoon, another prominent figure in the Korean entertainment scene. The synergy between the actors and director produced an amazing, meaningful film that was genuine and had an essential purpose. I felt extremely shortsighted for doubting this film before watching, as the message it put out into the world was so strong and powerful.

Na Ok-Bun has a secret she needs to tell the world. Known as the “Goblin Grandma,” Na was a despised elderly woman in her community, filing over 8,000 petitions and complaints on the tiniest problems to the local government office for over 20 years. When a new public servant, Park Min-Jae, starts working at the office, Na and Park go through several problematic interactions, and Na makes it her goal to make life hell for Park. Meanwhile, the “Goblin Grandma” starts learning English, as she has a message she would like to get out to the world. However, she finds it extremely difficult to progress her English skills. Just then, she finds out that Park has profound skills in the language, and starts wanting him to be her tutor. She follows him around everywhere, begging him to help her out. Park eventually gives in, the two come to a mutual agreement, and Park decides to be Na’s teacher. And that’s when their relationship begins to grow, learning more about each other and their circumstances. Park begins to be curious as to why Na is trying so hard to learn English, and finds out her true purpose. Na’s underlying aspiration and reason is of critical importance, clarifying all of her past actions.

I highly appreciate the messages that <I Can Speak> got across. I believe the movie had two big meanings; one on language, and another, more important one, on a serious, international issue. The first message that I received from the film was the significance of language, and its importance in terms of communicating. “English” is seen as merely a subject to learn at school in Korea; it is one of the three subjects learned and tested on for college admissions, and employers test potential employees on English a lot of times as well. Therefore, there are endless academies specializing in English and teaching the language to pass tests. However, this perspective on language is not proper, in my opinion. I personally have the belief that English is merely a tool for communications, and that as long as the other person can understand what you are trying to say, and you understand what the other person is saying, then the purpose of language is fulfilled. Yes, grammar, spelling, and other factors are important, but the main, fundamental role of language is to aid two or more people in communicating their thoughts.

That being said, I think that the film wonderfully portrayed my ideology. There’s a scene where Park tells Na that you don’t need to use long, complicated words. Simple and short words that can get your message across is so much better than complicated vocabulary that diminishes your ideas. I couldn’t agree more. What’s the point of speaking if the other person can’t understand? Na’s speech near the end of the film was extremely powerful, and shows that even if your English isn’t perfect, it’s the message and delivery that makes it empowering.

**The next two paragraphs may have spoilers you may not want to read, so skip ahead to the part after the next image if you do not wish to read on the reveal of the main message.**

But the movie isn’t only about language and an elderly woman trying to learn English. The second, more significant message that the movie delivered was of crucial importance to Korea and the world. The message was on a sensitive international issue, based on true events and real experiences of many innocent elderly females: Comfort Women. “Comfort Women” is a term for the numerous females that were forced into sexual slavery by the Imperial Japanese Army during WWII (“Comfort” is a horrible and inappropriate word to label what these innocent women had to go through). I won’t be going over this issue in depth in this review, but I highly suggest researching and learning about the topic; it’s dreadfully awful what these women had to/have to go through, and ludicrous that these women still have not received proper apologies.

Na is revealed to be a Comfort Woman, and the true reason why she’s learning English is to send out a message to the world what she and so many other women had to go through. Once the real reason Na is learning English is revealed, you start to grasp the true meaning of the film, and understand the movie on another level. I am sincerely thankful and love that this movie wasn’t afraid to make a feature film on a sensitive, political topic, and helped me and so many other viewers understand the seriousness of the issue. 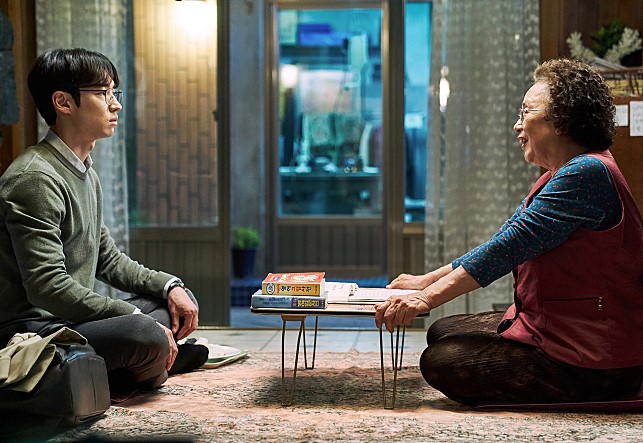 Despite the film being about a sensitive and emotional topic, I loved how the movie was genuine and didn’t try to force the tears out of its audience. I’ve seen so many films that seemed to be made with the purpose of triggering emotions of the viewers and getting the watchers to cry. This was not that. It showed that if you can focus on the real issues at hand and the core message, then you don’t need to “try” to get the audience to be emotionally invested. The sentimental attachment naturally follows. Furthermore, the amazing acting by Na is what made this emotional connection possible. Her words, delivery, and acting were so strong and powerful that it almost overshined the other actors (not saying the acting by the other actors was bad; the performance by the “mart lady” was phenomenal as well). It’s no wonder why Na Moon-Hee is such a critically-acclaimed actress in the industry.

Once again, the acting by the English actors was really bad… (as with majority of other Korean films) It felt extremely unnatural, and the dialogue seemed like it was out of a CD for English textbooks. You would think that because the movie is titled “I Can Speak” and revolves around the English language, that they’d be able to cast English actors that can actually act. I was slightly disconnected from the film when the scenes with the English actors came on, and I just feel like they could’ve cast some better actors that can add more to the film. Nonetheless, the outstanding acting by the lead actors made up for the bad acting, much like <Ode to My Father>.

Furthermore, the movie lacked reality in some scenes. There were several cringe-moments, and parts where you’d think that it wouldn’t be like that in real life.

Lastly, the target audience could be seen as being for an older generation. However, the movie was very well-made and I think it is suitable for everyone, as the younger generation needs to learn about the main message of the film as well.

<I Can Speak> was a warm and touching movie, with a powerful message on a serious and urgent issue. It was very sentimental, and I would recommend you to go and watch this. Don’t let the trailer fool you.