“How do you expect a wolf to work for a dog?”

One word to describe this film: “Classic.” Everything from its actors, musical scores, story, and quotes said are classics that shaped and defined Korean cinema for years to come. Scenes and references to the film are still made to this day on various shows, dramas, other movies, and more. Being released over ten years ago, the film is still an extremely enjoyable and entertaining movie, and a must watch for Korean cinema fans. 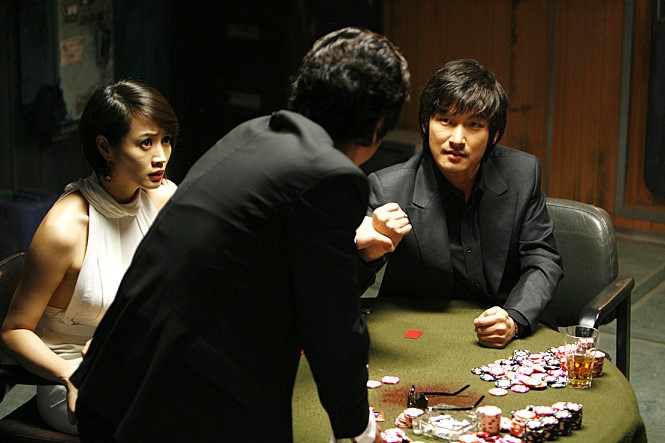 <Tazza: The High Rollers> is the first of a two-part series that was released back in 2006. Directed by Choi Dong-Hoon, who also directed <The Thieves> and <Assassination>, the cast members of this is incredible: Cho Seung-Woo, Kim Hye-Soo, Baek Yoon-Sik, Yoo Hae-Jin, Kim Sang-Ho, Kim Yoon-Suk, Kim Eung-Soo, and Joo Jin-Mo. All of these actors are amazing performers and were perfectly chosen to portray their roles. The sequel <Tazza: The Hidden Card> was released 8 years later, in 2014, and features stars like T.O.P of Big Bang, Shin Se-Kyung, Kwok Do-Won, Lee Hanee, and more, including Yoo Hae-Jin from the prequel. There is a third film in the works according to several sources, but no official announcement in regards to the release date have been made. If I recall correctly, I believe the series is based on a four-part comic. 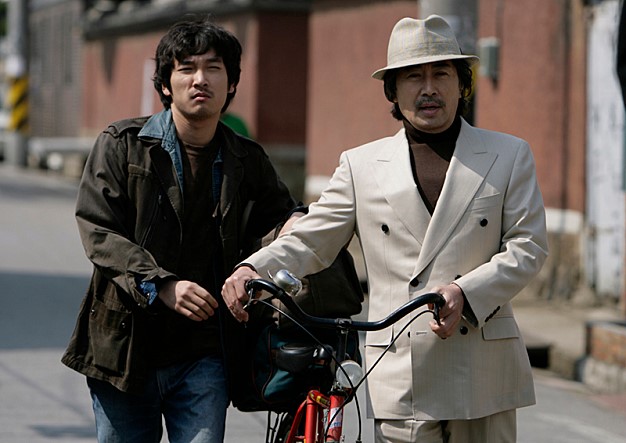 Go-Ni (Cho Seung-Woo) lives a miserable life, working at a furniture factory instead of going to college because he believes money is the sole thing that can get him out of poverty. One day, he sees Park Moo-Seok (Kim Sang-Ho) gambling in a session of ‘Hwatu,’a gambling card game many older Koreans play, in the back of the factory. He can’t overcome the temptation and joins in. Not too long after, he loses all of his 3-years’ worth of savings. He later finds out that the game was rigged, and that he was swindled into losing all of his money. Furious at this fact, he goes after Park Moo-Seok, searching for him throughout the country. Along the way, he comes across Corporal Pyeong (Baek Yoon-Shik), a notorious ‘Tazza’ (a word to describe an extremely skilled Hwatu player; usually swindles and scams people out of their money; can also be thought of as an “illusionist” and “scam artist”). Go-Ni follows Corporal Pyeong around, begging him to take him under his wing and teach him his ways. Corporal Pyeong eventually gives in, but with a catch: Go-Ni must quit Hwatu once he makes back fives times as much as what he lost in the furniture factory. Go-Ni begins his new life, as the next infamous Tazza.

As mentioned before, <Tazza: The High Rollers> is a classic Korean movie. When the main musical piece of the movie plays on TV shows, dramas, and other movies, you instantly think of the film. Furthermore, numerous comedians, actors, singers, etc. have imitated the characters of the movie. Tazza 1 defines “classical Korean film,” and even today I think it’s up there in terms of great story and acting. Don’t let the trailer fool you; it doesn’t seem as old as what the trailer makes it seem when you actually watch the film.

The acting by everyone is amazing in this. I can’t think of a single person that I think was wrongfully casted. Almost every actor/actress in <Tazza: The High Rollers> was a familiar face. I mentioned in my <The Chase> review that I thought the role Baek Yoon-Shik played in that wasn’t properly chosen. However, this is totally the opposite. He made the Corporal Pyeong character, Corporal Pyeong. I don’t think anybody else could’ve portrayed him the way he did. And because of his such memorable performance in this, I can’t unsee him in this role when I see him in other works. Oh, and the roles of Cho Seung-Woo, Kim Hye-Soo, “The Racoon,” and Yoo Hae-Jin are all also staple characters. 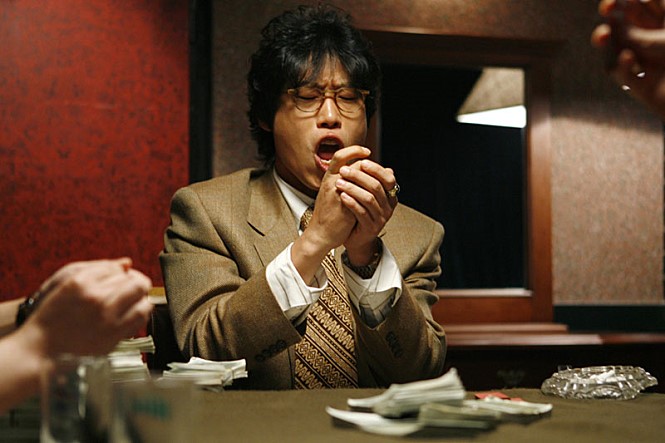 **Spoiler alert: Skip below to “The Bad” section if you do not want any spoilers.

One great foretelling the movie provided was when Go-Ni said he’ll kill himself if he lost all his money in the beginning, and later when he let go to fall off the side of the train near the end. Although he didn’t kill himself when he lost all his sister’s money at the factory, I believe he did let go of the moneybag that was keeping him alive, dangling off the side of the train, with the determination to die. This is because once the cash in the moneybag was opened and all of the money inside scattered into the air, that’s when he decided that he “lost all of his money,” and that’s when he determined that it was time to kill himself, as he promised in the beginning. Thus, letting go of his lifeline with a smile (although he didn’t actually die, I believe his intent was to).

There aren’t that many negatives of the film. The film was on the longer-side: 2 hours and 20 minutes. This may be too long of a duration for some, but I thought it was decently paced and was enjoying every moment of the story. I watched the movie on Netflix, but think that if it would’ve been an even better experience if viewed on the big screens.

Although the film is over a decade old, it doesn’t feel like an old movie. The one thing I would say was outdated was the cinematography. The cinematography just feels a little old (because it is) and the style isn’t what we typically see today. However, that didn’t take away much from the viewing experience, and during its time when it was released, it was great film work.

The narrative concentrates on the game of “Tazza,” so if you don’t have any knowledge of the card game, it may be harder to understand or grasp the overall story. If you don’t know anything about it, think of it as like Blackjack, trying to get the highest number possible, but there are “illusionists” (Tazzas) tricking the players with their fast hands and manipulating the game. 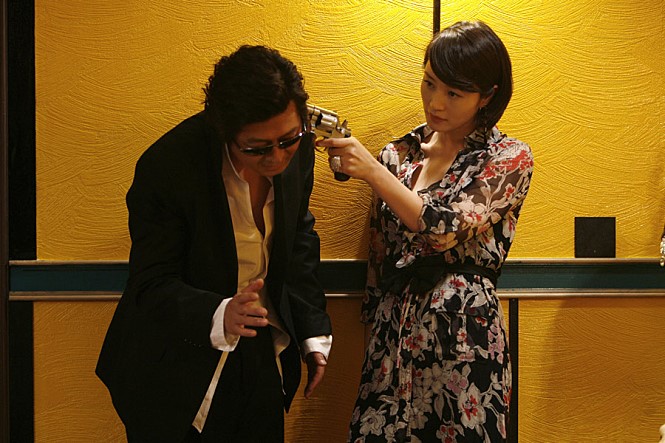 This is a classic, a must-watch. However, it is rated 19+, so as long as you are of the age, you need to watch this if you love Korean movies. A lot of your favorite actors rose to their fame, claimed their spots as Korea’s top performers, and/or proved their high status in the Korean entertainment industry through this film.

The reason why I’m not giving this a higher TPV despite being a classic is because it is rated for a mature audience, is an older film that may not be as enjoyable for more recently-joined Korean cinema fans, and the story may not be for everyone, given that it revolves around a very traditional Korean card game.