Hello everyone and welcome back to another K-movie review by EonTalk. In today’s review, we’ll be taking a look at the new thriller-disaster film with a stunning cast <Emergency Declaration>.

<Emergency Declaration> was directed by the well-known Korean director, Han Jae Rim. Director Han is known for works such as <The King>, <The Face Reader>, <The Show Must Go On>, and <Purpose of Love>. We’ve seen various genres from this director, ranging from drama, comedy, crime, and historical drama. But one we haven’t seen is disaster – so, how good was it?

The synopsis is as follows:
While investigating a terrorist threat that goes online, Korean authorities discover that a suspect has recently boarded a flight bound for the United States. When a healthy passenger on the same plane suddenly dies, panic erupts both in-flight and on the ground. With steadily decreasing fuel and international refusals to offer aid, the captain and crew take unprecedented emergency measures to save the lives of all on board. Meanwhile, back on Korean soil, the Korean government tries to find a way to solve the terror attack and a place for the plane to land. Panic and uncertainty ensues both in the sky and on ground.

First, I love that there was really good intro to the characters from the start. The film laid out the background stories of the characters, and really got the audience to understand the situations of each of the characters before really starting the movie. And once the movie really began, oh man was it a thrilling ride.

<Emergency Declaration> had really, really good suspense. It kept me at the edge of my seat, gripping at the armrest. They executed the freaky scenes superbly, and the film gave me chills numerous times while watching. It was like a freaky scene, after freaky scene, after even more freaky scenes. It just kept getting better and better (until it didn’t, which I’ll get to later), but oh my was it good in that thrilling buildup. It was damn near horror! And Lim Si Wan deserves immense credit in that department, as his acting was chillingly good. He’s so good at that freaky, spooky acting. Maybe it’s because he has such an innocent look to him, and thus, making it even more freaky. Anywho, amazing suspense, and the amazing musical scores it had really set the mood and enhanced the suspense that much more. 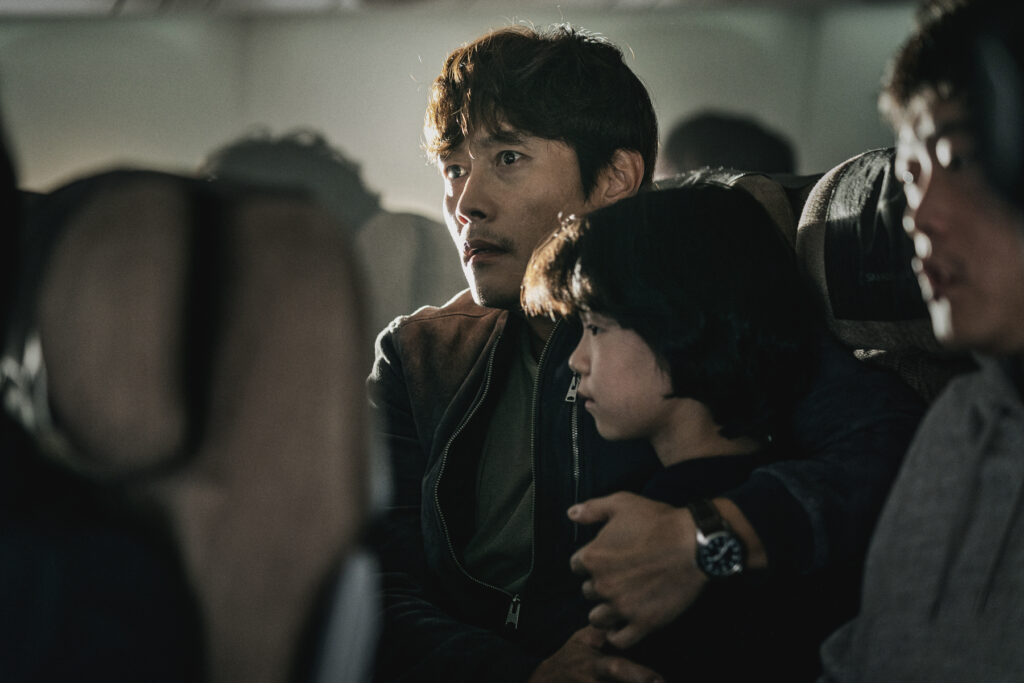 And it wasn’t only with Lim Si Wan, but as you could probably expect from the cast lineup, all of the performances were executed stunningly. Lee Byung Hun, Song Kang Ho, and Jeon Do Yeon are veterans, and so of course, nothing to complain about with their acting. And Kim Nam Gil, Kim So Jin, Park Hae Jun, and as mentioned, Lim Si Wan, also put on some of their best performances.

Minor spoiler from this point on, so please skip to the “bad” part if you don’t want to be read.

This movie was especially scary in this day and age, as the terror attack that took place in <Emergency Declaration> was a bio-terror. In other words, virus attack. Because of the fear we have due to COVID, and how close it hits home with the virus, it enhanced the suspense and relatability twice as much. This film was at Cannes last year, but wasn’t released til now. And I can see why. COVID was a global terror last year, and to have a film about virus attack at the height of the pandemic, my guess is it wouldn’t of gone well. 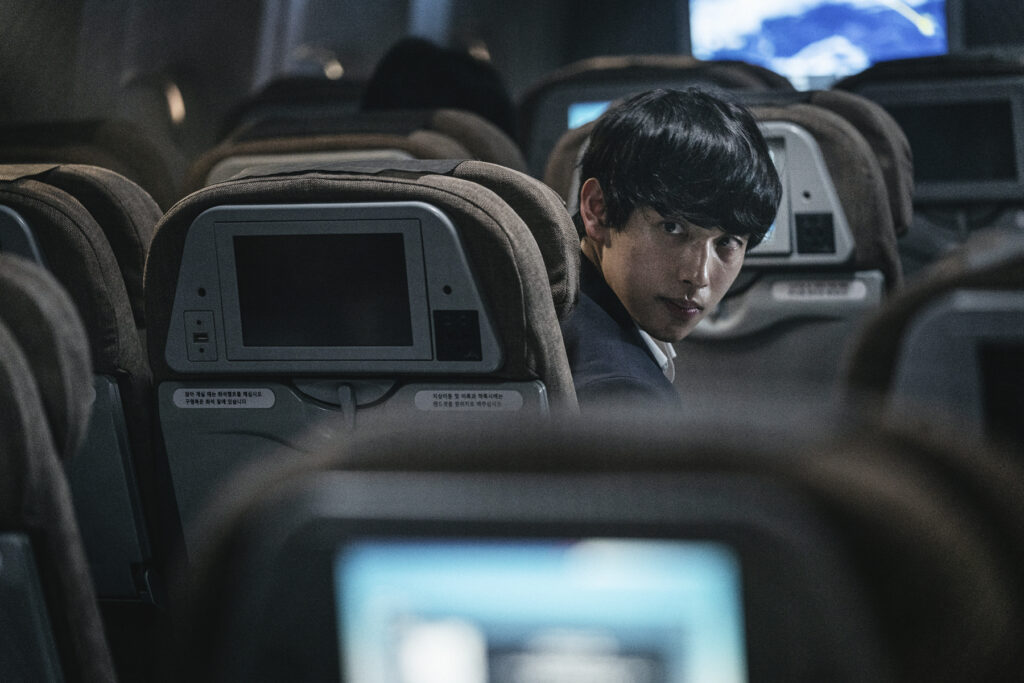 Also, as you may know if you’ve seen the behind the scenes trailers and interviews, a lot of the stunts and sequences were actually implemented. For example, the turning and spinning of the plane. It was incredibly well produced and the cinematography was very good.

Moreover, I can see this movie being compared to <Train to Busan> a lot. It definitely has overlapping qualities, but can it be the next <Train to Busan>? Some of the mutual elements found between the two movies are the signature “villain,” and how the horror is derived from the fact that the characters are trapped inside an enclosed place; there’s no escape. Yes, there are similarities, but do I think it has what it takes to be on the level of <Train to Busan>? To answer that, we’ll need to look at the negatives as well. 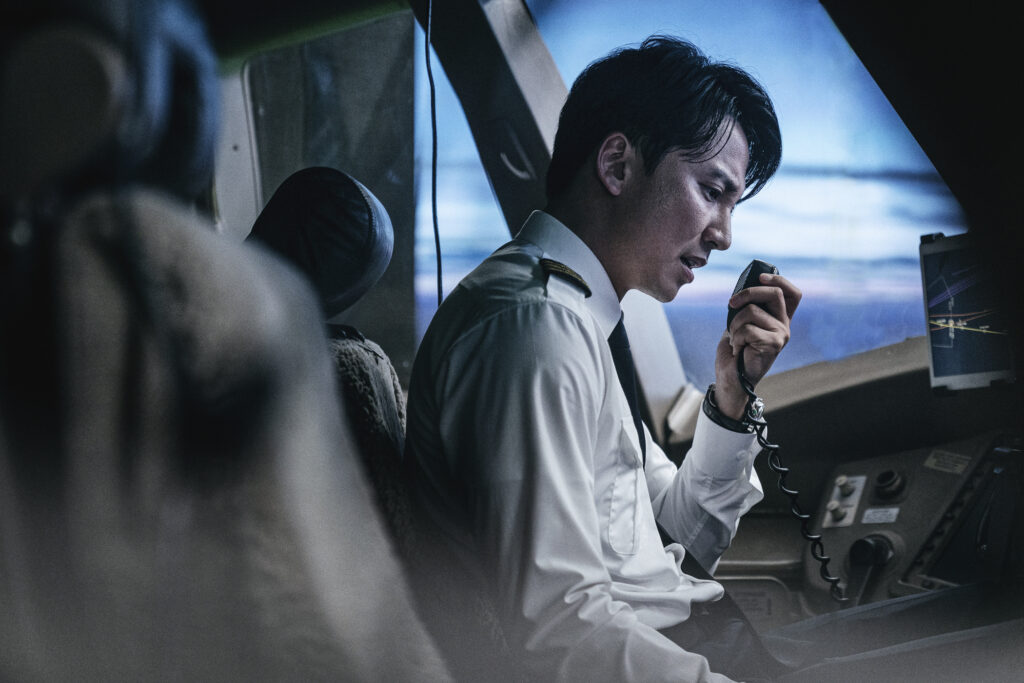 Let me get the nitpicks out of the way first, and progressively move onto the bigger negatives. The film had some grotesque parts, and so, if you’re sensitive to gore and blood, there may be parts that may gross you out a bit. Also, there were a couple parts with way too much flashes. It was so bad that it hurt the eye, especially when watching in a dark theater.

Furthermore, although the overall cinematography was great, there were parts with very shaky scenes. This was especially the case during the car chase scene. I normally wouldn’t be too nitpicky and would overlook if it isn’t too bad, but this was overly shaky.

Another thing that I noticed was that the film used real footages from real terror attacks. For example, scenes from the Las Vegas shooting was used, and I could see this getting some backlash from those affected for being insensitive.

Oh, and my last nitpick is the bad acting by the foreign actor. Almost always say this in movies with foreigners and/or when there’s English acting by Korean actors, but it’s almost always bad. And I’ll keep saying it… 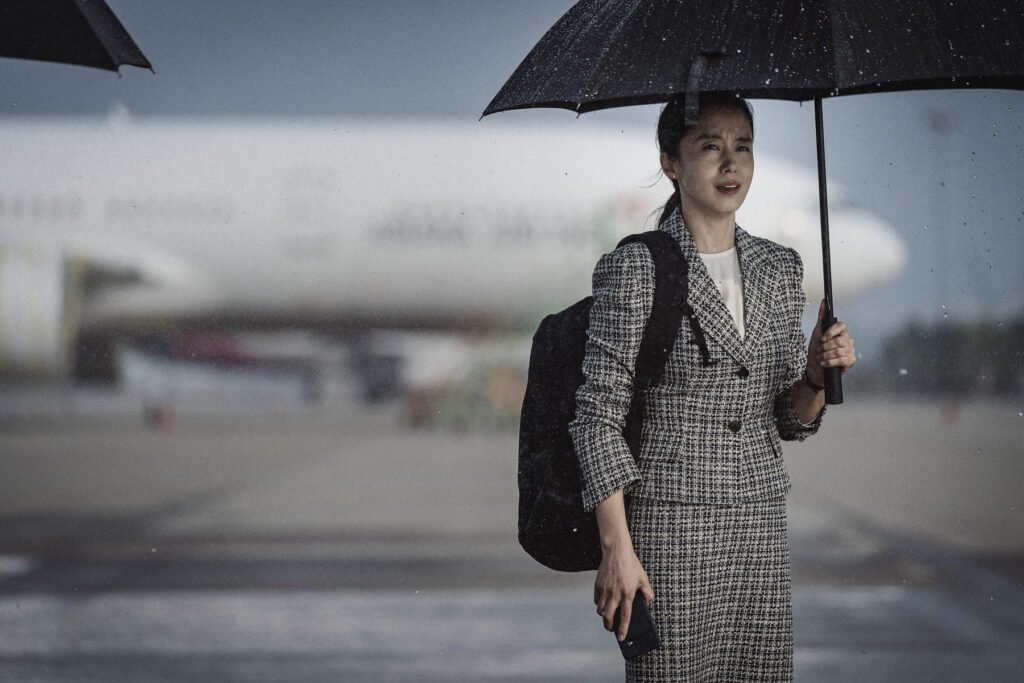 And the biggest, monumental negative about <Emergency Declaration>, was its inability to finish strong. Compared to the build up and how good it was up til the climax, the resolution was far too unfortunate. There was no real surprise, it was predictable and cliche, and had twists for the sake of having twists. There was no real surprise, and heavily forced emotions and tears. Very unnecessary scenes and forced parts that almost ruined the film; thank goodness the buildup was good.

The film also dragged a little too long. Let me put it like this; the movie has a runtime of 140 minutes, or 2 hours and 20 minutes. It was really good and was a really solid thriller for the first hour and a half or so. I give it all its praise and appreciation for the first hour and a half. And then remaining 50 minutes was all downhill. So unfortunate… The first two-thirds was like an almost-perfectly executed thriller, and the remaining 50 was like a garbage social commentary film. If the film would’ve been able to have done half of what it did in the buildup in the resolution, this would’ve been by far the #1 film of 2022, and even perhaps one of the best thrillers of recent Korean cinema. So unfortunate. 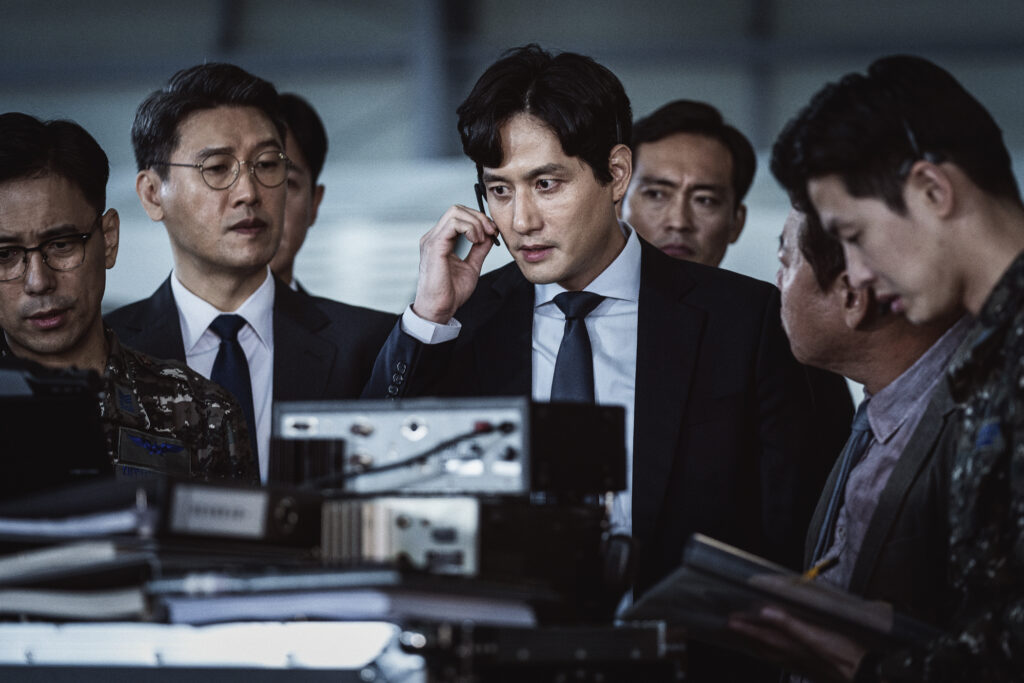 <Emergency Declaration> was an amazing thriller full of suspense. It was even better and even scarier because it’s our every day life now, and very plausible. You get an uneasy feeling after watching, and are creeped out, in a good way. The film had had so much potential, but couldn’t finish strong. It was really really good when good, and pretty dang bad when bad.