Hello everyone, and welcome back to another Korean movie review by EonTalk. Today’s movie review will be on the new disaster film, <Sinkhole>.

<Sinkhole> was directed by Kim Ji-Hoon, the director behind other movies such as <May 18> and <Sector 7>, as well as another disaster film titled <Tower>. The movie also featured an incredible lineup of Cha Seung-Won, Kim Sung-Kyun, Lee Kwang-Soo, and Kim Hye-Jun, one of the better cast members we’ve seen this year. If you’ve seen the trailers of the film, or even just based on the title, you’d know that the movie revolves around a major sinkhole, and a group of people trying to survive and escape from the unfortunate tragedy. Let’s take a look at the detailed synopsis of <Sinkhole> before diving deeper into the review.

The synopsis is as follows:
‘Dong-Won’ achieved his lifelong dream of purchasing his own home in Seoul, after working his butt off and saving for 11 long years. However, his move into his new place wasn’t as smooth as he had hoped, as he runs into ‘Man-Soo,’ and the two have a rocky start. Nevertheless, in celebration of his new home, Dong-Won invites his work colleagues over to his place for a housewarming party. The gang have a jolly ole time, drinking the night away. The next day, the unthinkable happens, and the entire building is suddenly swallowed whole into a major sinkhole. The unfriendly duo of Dong-Won and Man-Soo, and the two colleagues that were at the wrong place at the wrong time, Manager Kim and Intern Eun-Ju, must survive and escape from the 500 meter-deep sinkhole before they’re buried deep forever.

First, I must mention the casting. <Sinkhole> had amazing casting, and all of the actors fit their roles perfectly. I especially loved Cha Seung-Won and the character he portrayed. That quirky personality of his was able to really shine in the ‘Man-Soo’ role, and didn’t go overboard on the comedic level like I thought he did in <Cheer Up, Mr. Lee>.

And speaking of Mr. Lee, Lee Kwang-Soo was also amazing. He felt very natural and as if he was playing himself, like his character on the variety show “Running Man.” His expressions were so lively and the way he’s able to make people laugh just by his facial expressions is incredible. He also proves once again that he’s not only a great entertainer, but an amazing actor as well. He can pull off not just the comedic roles, but emotional and more deeper acting as well.

Moreover, <Sinkhole> is full of funny, humorous scenes. I was a little afraid that the trailers gave away too much of the funny scenes, but this was something not to worry. There were so many hilarious parts throughout the film, and what was shown in the trailers was just the tip of the iceberg. I especially thought the relationship between Cha Seung-Won and Kim Sung-Kyun was highly comical, and loved how the film introduced these two characters in the beginning. 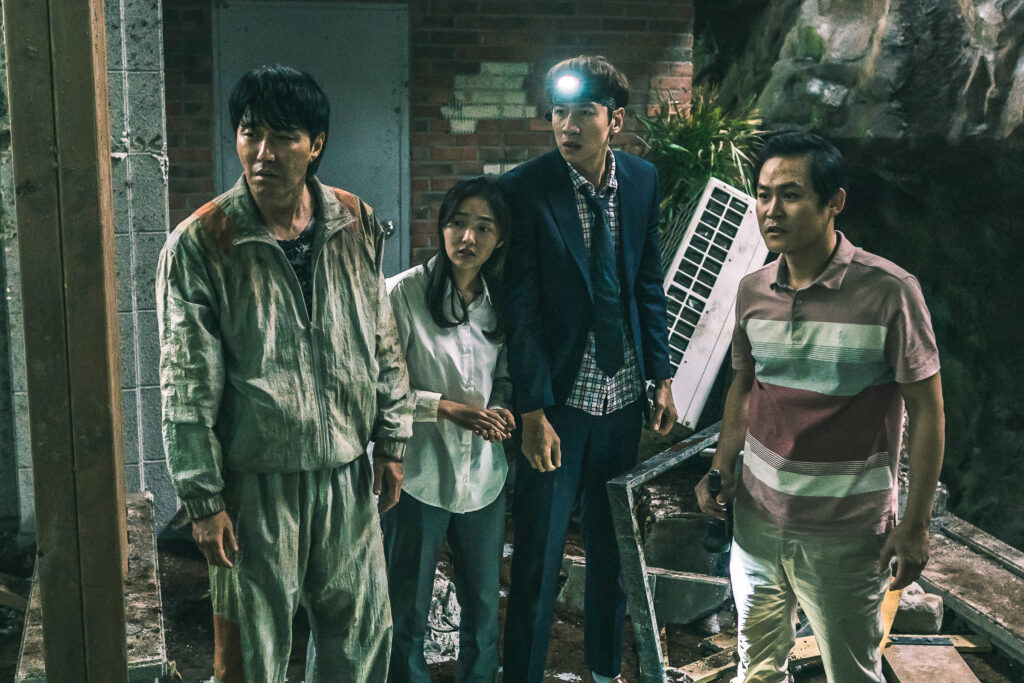 Even the child actor that played Kim Sung-Kyun’s son was great in his role, playing a very cute and adorable kid. Also, I thought it was my first time seeing actresses Kwon So-Hyun, who played the wife of Kim Sung-Kyun, but she actually had a minor role in the film <Miss Baek>. However, she had a much bigger impression in <Sinkhole> than <Miss Baek> for me. Another actress that I thought was my first time seeing was Kim Hye-Jun, but she was also in “Kingdom,” as well as the film <Metamorphosis>. Definitely another actress that left a huge impression with this role, and another actress that fit her role perfectly.

The feeling of purchasing your first home must be amazing, especially with the prices spiking sky high in Seoul in recent years, and a sense of great accomplishment must’ve been felt by the main character, and Kim Sung-Kyun expressed this very well. You can really see the happiness of that purchase in his eyes, and also the opposite of that happiness once the house falls 500 meters deep into the ground.

And lastly, the buildup to the actual occurrence of the disaster was satisfying. This was where the character development took place and really prepared the audience for what’s to come, and that crescendo into the incident was executed exceptionally. 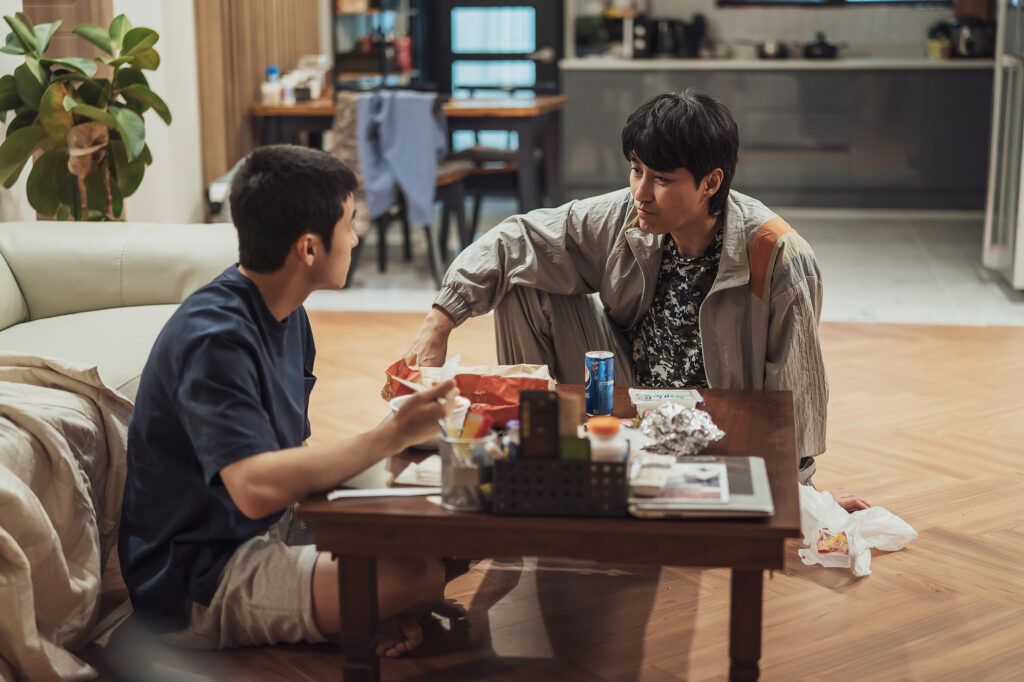 There weren’t a lot that I found to be disappointing with the movie, but one of the bigger ones was the CGI it had. We’ve seen what Korean cinema is capable of when it comes to CGI and special effects nowadays, with film such as <Space Sweepers>, and I do acknowledge that there are budgetary differences, but am just saying that it wasn’t up there as some of the other movies with better computer-generated scenes. Not saying it was unwatchable, but definitely could’ve been better.

Furthermore, there were parts that didn’t make sense. This may be a minor spoiler, so skip ahead a little if you don’t want to hear, but for example, there’s a part where the characters are inside a water tank. But if they were to actually be inside a tank like that, they shouldn’t be able to breathe if they’re in there for a prolonged period of time. And the way the water filled up so quickly was very implausible. However, I will say that these are something that’s forgivable, in my opinion, because of the type of movie the film is, and especially since it did everything else so well. I’d say they were able to make majority of the narrative make sense, so overall, a pass with flying colors in my books. 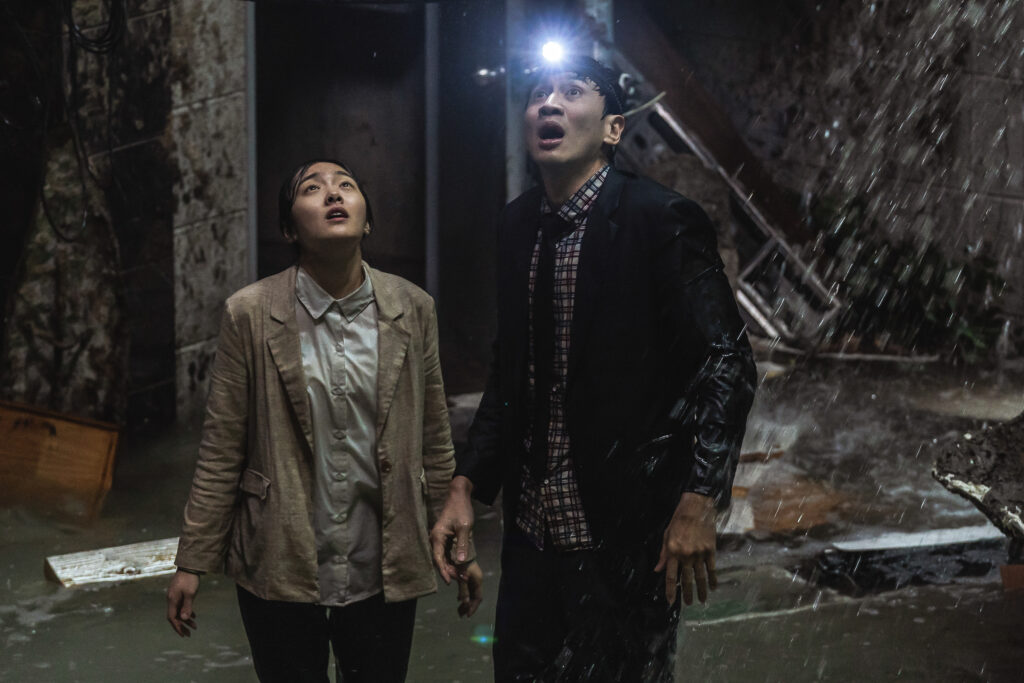 <Sinkhole> was one of the funniest movies I’ve seen recently. It was not only one of the best disaster films of recency, but comedies as well. And it didn’t only have comedy, but also thrill and suspense, action, and emotion as well. There was no time to be bored, and I also appreciated that they made the movie relatively realistic and didn’t try to force things, something a lot of disaster films are guilty of. If you enjoyed the film <Exit>, I highly encourage watching this.