Before going into this film, I had not read the synopsis nor had I seen the trailer. Therefore, I didn’t know what the movie was about, and had low expectations. All I knew about the film was that it was a comedy, and that Son Dambi as well as the comedian Jung Sang-Hoon were two of the four main cast members. Furthermore, the screening I attended had a cast greeting before the film started, and seeing the main cast before the movie had some influence on my perception of the film. Nonetheless, my thoughts on the movie stands strong. Long story short, the movie was bad… Like really bad… 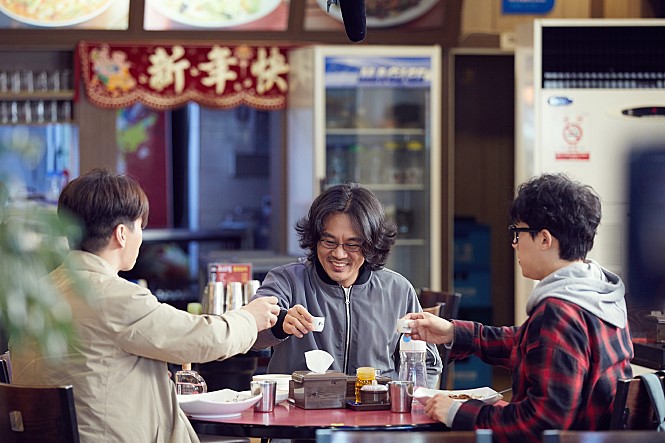 Directed by Park Jin-Young (not JYP), <Too Hot to Die> was a low-budget film, and I believe the director’s first production. And in alliance with the low budget, the main cast members were B-list stars: Kim In-Kwon, Jung Sang-Hoon, Son Dambi, and Kim Sung-Chul. Although most of the cast were recognizable faces, they aren’t famous for their acting; Jung Sang-Hoon rose to fame through his comedy, and Son Dambi through her music back in the late 2000s. As for Kim In-Kwon, he is a good actor, but isn’t the type to get the main leads in other films, and is usually a supporting role. Therefore, I had a lot of skepticism as to how good the movie could be, seeing that the main cast didn’t have any proven past of cinema performances.

Four members of a mass suicide community decide to meet up and leave this world together. Their usernames are (1) ‘The Last Flame,’ (2) ‘Life is Complete,’ (3) ‘Happiness is Based on Results,’ and (4) ‘Rose of Betrayal,’ and comprised of 3 males and 1 female. They are convinced that they have the most depressing and devastating lives, and determine to meet in order to spend their last day on Earth together. However, only the 3 males initially show up; but they decide to proceed with the plan. First, they complete each of their own bucket lists, then get a motel room to party for the last time. Afterwards, they plan to simultaneously take shots of a drug that’ll kill them quickly and without pain. As they raise their shot glasses to end their lives, ‘Rose of Betrayal’ suddenly shows up. She’s the hottest lady they could’ve imagined. The night suddenly turns into one of trying to seduce ‘Rose of Betrayal,’ and less of the planned suicide.

The movie was a simple flick with humorous scenes scattered throughout its duration, decent for a light watch. Because of its low-budget, you can’t really expect an extraordinarily produced work, nor the best actors. However, the film was decently made in terms of cinematography, and the cast were all familiar faces (although their performances is a whole different story).

As I mentioned, I went into the movie without any knowledge of the story. Thus, it was pretty intriguing trying to figure out what was going on. No, the story isn’t great; but it does set the stage for a comedic narrative. I’ll get more into the humor points below, but some of the intended comedy were funny; no, there weren’t any real LMAO moments, but there were sprinkles of chuckle moments.

Because I saw the main cast (Kim In-Kwang, Son Dambi, and Kim Sung-Chul) in real life before watching the film, that had some influence on the way I saw the film. Since I saw what they were like in their natural state, not acting, I found myself comparing their natural selves to the roles they were portraying. This being said, Kim Sung-Chul’s performances was very respectable. His acting was drastically different from how he was in real life, and I believe this showed his acting capabilities/potential.

This was a comedy. It’s understandable if the story isn’t the best, if the acting isn’t superb, or if the cinematography isn’t amazing. However, it should at the very least be funny. Yet, the humor was over the top, and I could feel it trying way too hard to be funny. Sure, there were humorous scenes, but there were significantly more cringy ones. Like the soccer reference of “if you shoot 10 times, 1 will go in,” they had so many attempts at trying to deliver laughter, that they had maybe 1 (if that) every ten tries. And even those weren’t LOL, but merely chuckles.

If you’re going to watch this movie, I think it’d be more appropriate to go into it thinking of it as more of a humorous skit or a long sketch, than an actual feature film. Jung Sang-Hoon’s performance was what really made it seem like a skit. His acting felt like his performances on SNL Korea. It got really annoying later and felt very unauthentic; as if he was trying to pretend to be someone else, even within the film.

The story was extremely predictable and unoriginal. Don’t expect any twists; if you’ve seen the trailer, you’ve basically seen the film. All the key points were in the trailer.

I wouldn’t recommend <Too Hot to Die>. It was not only one of the worst comedies I’ve seen recently, but one of the worst movies in general. There are many great comedic films good for a light watch, such as <The Soul-Mate>. This doesn’t count as one of them.