Hello everyone! Today, we have a very special movie review, as it’s not only on a classic masterpiece, but was also written by a special guest on the EonTalk site! The review of <The Housemaid> was brought to you by a good friend of mine that I got to know through our mutual love for Korean movies, Bobby Bevilacqua. You can read more about him in the short bio found below, and also by following his personal Twitter, @rpb725. That being said, let’s get into today’s review! (The content from hereon out were composed by Bobby)

With the increasing attention around South Korean movies after <Parasite>’s historic Best Picture win at The Oscars, I thought I’d go back and take a look at a more classic Korean film, one Bong Joon-Ho considers one of his favorites and an influence of his. That film is Kim Ki-Young’s <The Housemaid>.

While South Korean movies in general have seen a huge surge in popularity over the last decade or so, most people only know or watch movies from the late 1990s to now. Directors like Park Chan-Wook, Lee Chang-Dong, Bong Joon-Ho, Hong Sang-Soo, Kim Ki-Duk, Kim Jee-Woon all were at the front of the Korean New Wave, where a surge in the popularity of the movie industry and increased funding caused Korean cinema to explode onto the scene.

Many of those young directors wound up re-discovering some of the great Korean directors from the past generations, and Kim Ki-Young was one of them, having earned a cult following in the 1990s when his films were being widely seen again. 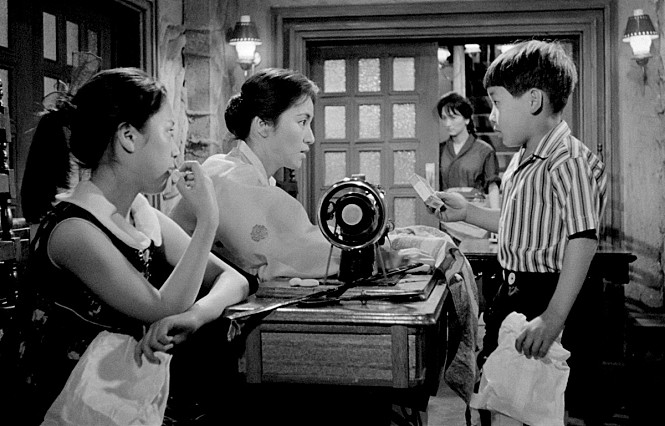 Hailing from the Golden Age of Korean Cinema, <The Housemaid> is arguably the most influential of Kim Ki-Young’s films. Around the time of its release, South Korea was under a military dictatorship that controlled many facets of everyday life. Park Chung-Hee’s regime regulated things like the length of a women’s skirt and how long a man’s hair was. Kim Ki-Young would go on to explore things like human desire in his films as a result of the social structure and regulations in post-war Korea.

The synopsis is as follows:
A torrent of sexual obsession, revenge, and betrayal is unleashed under one roof in this venomous melodrama from South Korean master Kim Ki-young. Immensely popular in its home country when it was released, <The Housemaid> is the thrilling, at times jaw-dropping story of the devastating effect an unstable housemaid has on the domestic cocoon of a bourgeois, morally dubious music teacher, his devoted wife, and their precocious young children. Grim and taut yet perched on the border of the absurd, Kim’s film is an engrossing tale of class warfare and familial disintegration that has been hugely influential on the new generation of South Korean filmmakers. (From The Criterion Collection)

Kim Ki-Young’s style in The Housemaid reminded me a little bit like the great Alfred Hitchcock, with his film showcasing some of the early tendencies seen in great thrillers, horror films and with a Femme Fatale villain as well. Bordering on the melodramatic and absurd, <The Housemaid> uses the social structure of Korean society at the time to set the groundwork for a captivating, at times shocking, drama and thriller.

The direction from Kim Ki-Young here is fantastic, with little subtleties and a knack for atmosphere and excellent camerawork. Largely taking place in one house, the film follows a middle-class family renovating their house and looking to hire a housemaid. Director Kim manages to showcase the class struggle, the culture clash between the family and the housemaid, and an exploration of human desires all under one roof, and it all works.

I really loved the cinematography. The tracking shots on the second floor, the use of windows and the stairs, and the use of light and dark colors to represent the social warfare taking place at the core of the movie. The house is captured in such a way that emphasizes the upper-middle class status that the family is searching for, as well as the distance they give the housemaid since she is a factory worker and not a part of their world. There’s two main symbols that are used consistently to represent this point – the main staircase and the piano. 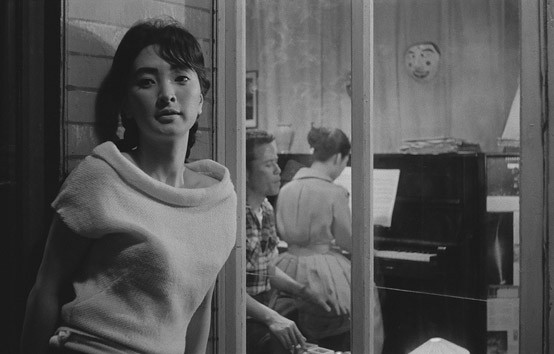 Both a staircase and a piano in the home are both representative of upper-class in Korean society at the time, showcasing some level of social comfort that wasn’t necessarily commonplace. There’s plenty of excellent shots and scenes that take place around the staircase and represent this social climb that both the family and the housemaid are trying to attain. While the piano serves as the main source of income for the husband, who is a music teacher, Kim Ki-Young uses the piano to serve as part of the excellent musical score for the film. There’s a great scene where the husband and wife are in bed, and suddenly this harsh, foreboding piano sound comes into the movie as the housemaid is hammering away at it upstairs. It serves as this creepy music that sets the tone, as well as a symbol of the housemaid lurking in the house, almost like a monster in a horror film.

I also like how the housemaid and the wife are essentially pitted against each other as two polar opposites, which is also shown through their outfits and the use of dark and light colors that pop up elsewhere in the film. The wife, shown in a light, traditional Korean outfit, sews at home as a side job and represents the ideal housewife at the time. While she is wary of the housemaid and her motives, she’s also concerned with protecting the reputation of her husband and their social status. 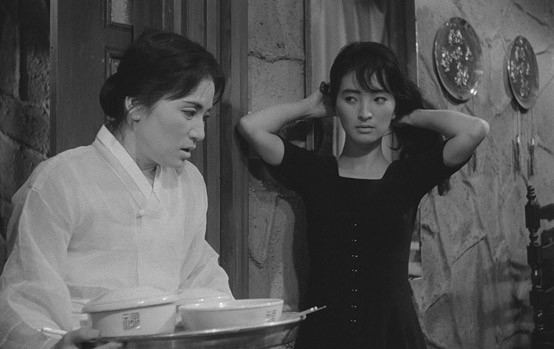 After a pivotal scene about halfway into the movie, the housemaid stars dressing in black and non-traditional clothing as she becomes a more controlling and impactful figure. It’s a smart visual opposite with the clothing and a perfect representation of the class struggle and social warfare going on in the house. Kim Ki-Young also uses both of these characters and their sexuality, particularly the way they use it and their motives behind their desire for the central male figure as one of the main conflicts in the house, and perhaps his way of addressing society at the time.

The acting in the movie is excellent, particularly by the three leads. Lee Eun-Shim plays the housemaid, and I think she was the best part of the movie. She has somewhat of a non-traditional look and behavior, which lends itself particularly well to her character. The housemaid is outwardly flirtatious, smokes a lot, and is strange and even aggressive in her mannerisms. There’s something mysterious, sexy and controlling about her character, and Lee Eun-Shim plays the part perfectly. 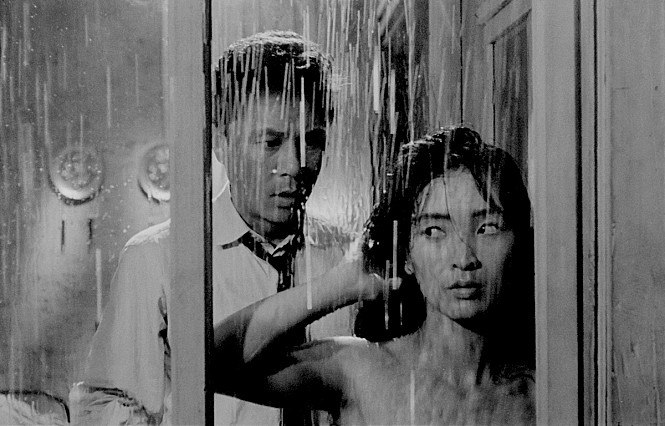 The main reason for the success of this story, the themes and the movie is because of a good script as well. All of the characters feel fully realized, and are well-written in a way that they push the central conflicts and represent the themes at hand in a way that makes sense and is compelling. The entire story at hand was engaging from start to finish.

I don’t really have too much bad to say about this movie. Unfortunately, a lot of Kim Ki-Young’s films have been lost, and two of the reels of this film were lost as well. However, they were restored (partially thanks to Martin Scorsese’s World Cinema Project), but there is a dip in picture quality at parts of the movie. I also was not super crazy about the way the movie ended. I think I understand why Director Kim made the choice to end it this way, and I think it works on some levels, but it didn’t feel as satisfying of an ending as I thought it would. 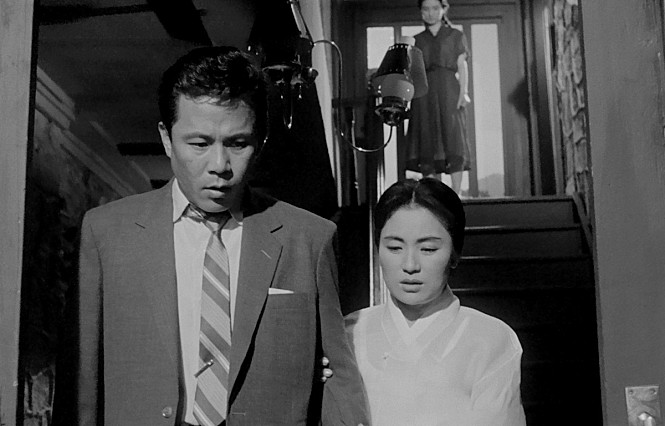 Ultimately, I think this is worthy of being considered a classic of Korean Cinema. It’s an incredibly well made drama/thriller with great acting, excellent cinematography, and a story that plays out like a classic Hitchcock film. It tackles themes of Korean society, class structure and human desires in a way that still feels fresh and timely today. I think this actually could be an excellent companion piece to <Parasite> with the way it addresses certain themes about Korean society, and encourage anyone who loved that film to see <The Housemaid>.

A super shoutout to Bobby for helping me out in providing more content for Korean movie enthusiasts! I hope everyone enjoyed his review on <The Housemaid>, and am excited to see what more content he’ll be sharing with us 🙂

Bobby grew up and lives in New York and works in New Jersey, where there is an abundance of movie theaters for him to go to. A lover of movies his whole life, he has been avidly following Korean film after watching The Admiral: Roaring Currents, The Tiger, and Train To Busan for the first time, and seeing more and more Korean movies ever since. He hopes his love and enthusiasm for movies can translate to people all over the world as Korean movies and culture continue to grow in popularity.