“You know what the best plan is…? It’s not having one…”

<Parasite> was easily my most anticipated film of not only this month, but the first half of 2019. I had extreme high hopes and expectations from just the list of cast members and the director. And long story short, I was not disappointed. Not one bit. The trailers of the film left me puzzled as to what the film would be about, as it gave very minimal information regarding the premise of the movie. From the narration of the trailer to the seemingly random Native American costume worn by Song Kang-Ho, you start to wonder just how all these “random” factors will connect. 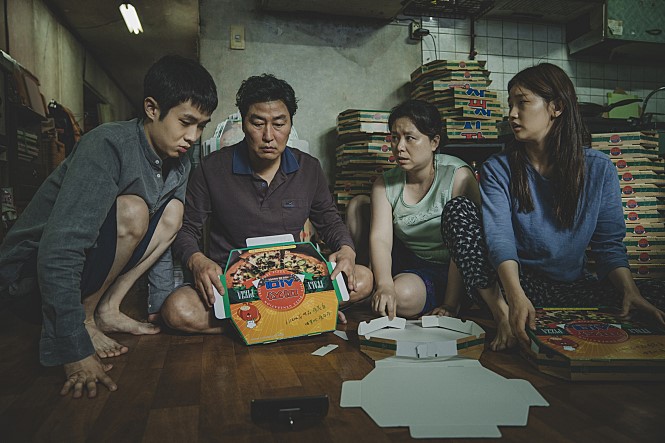 Directed by arguably the most famous and beloved Korean director Bong Joon-Ho, who’s other works include <Memories of Murder>, <The Host>, <Mother>, <Snowpiercer>, and more recently <Okja>, his new directorial production <Parasite> marks his return to South Korean film in 10 years. Because of his long hiatus from the Korean cinematic scene, there were undoubtedly extremely high expectations with <Parasite>, especially since it stars his partner-in-crime Song Kang-Ho. And I must say, he and Song Kang-Ho does it again and knocks it out the park with this…

Beyond Song Kang-Ho, the lineup of lead cast members was equally great, including Lee Sun-Kyun, Jo Yuh-Jung, Choi Woo-Sik, Park So-Dam, and Jang Hye-Jin. The supporting and cameo cast were just as amazing, with Lee Jung-Eun, Park Suh-Jun, and more.

What made anticipation for <Parasite> grow even further was the fact that it won the Palme d’Or at the 2019 Cannes Film Festival, the highest prize attainable at the event. Not only was this the first Korean film to win the award, but the audience gave a standing ovation for over 8 minutes after the film was finished showing. This is an incredible feat in itself, as the audience was filled with foreign movie stars, directors, producers, and critics, and to gain recognition from such a diverse audience must have been an unforgettable moment. 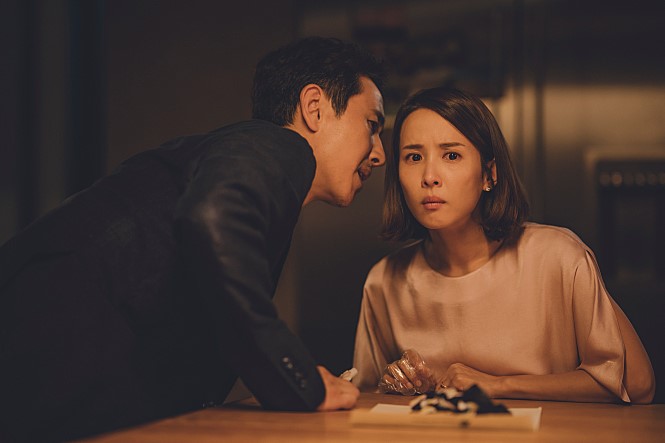 The synopsis is as follows:
**I’ll try to keep this short and simple to not reveal too much; maintaining that mysterious, unknowing element is crucial when going into this film

Ki-Taek’s family members are all unemployed and live a hard life, but one thing they do have is a great relationship amongst each other. When the eldest son of the family, Ki-Woo, is connected to a tutor job by his friend, the family finds hope. When Ki-Woo arrives at the home of the student he’s to start tutoring, he finds the family of the student to be extremely wealthy. And as the relationship between Ki-Woo and the rich family progresses, strange and unthinkable events start to occur.

Did you find the synopsis and trailer confusing? Good. That’s exactly what was intended. You’re not supposed to know what the film is about before watching. As Bong Joon-Ho himself even said, it’s best to go into the film with a blank slate. I’d even recommend not watching the trailer for the best viewing experience. The movie has such an odd and mysterious vibe from just the previews, and when you start watching, that transcends to the overall mood of the movie. The film starts off with a strange form of comedy; some say it’s black comedy; some say it’s satire. I can’t say there’s a definite genre of what the humor of <Parasite> was. However, it was definitely funny, with a splash of peculiar elements to it.

And it’s not just the comedy that had a blurred genre. The overall genre of the movie is very obscure. As mentioned, there were comedic elements. But that’s only the beginning, as there were also thrill, mystery, drama, confusion, suspense, social commentary, and probably more that I can’t think of at the moment. To simply sum up the film, it was ‘Bong Joon-Ho.’ I strongly do believe he has a genre of his own. He introduced it with <The Host>, <Mother>, and <Snowpiercer>, and defined it with <Parasite>. 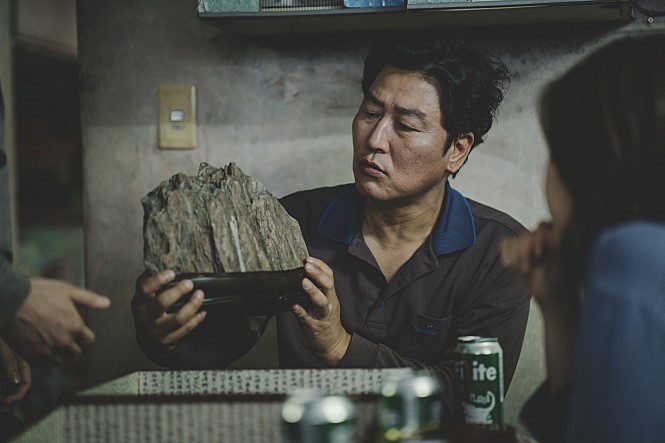 Furthermore, the cast and their acting performances could not have been better. All of the actors gave phenomenal performances, and not a single one was bad (which is extremely rare). Each and every one of the actors had their own distinct color, and if you didn’t know the actors before going into the film, you will after because they leave such a lasting impression. I honestly don’t have much more to say about the acting and cast members, as they were damn near, if not completely, perfect.

There were so many layers to the film. It was like peeling an onion, as it just kept revealing more and more layers as it progressed. In addition, I highly appreciated that this movie was not only an entertaining one, but had great messages as well. There were various social commentaries, symbolism, and hidden messages, and I believe they were open for the audience to interpret. What I saw in a certain way may have been understood in a completely different manner for someone else. And I’m sure there were a lot more that I didn’t catch as well. But one thing for sure is that it was all intended that way by Bong Joon-Ho. 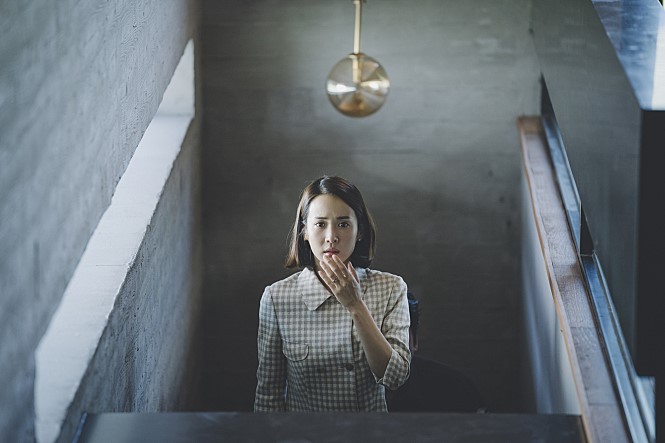 One specific element of the movie that stood out was its use of stairs throughout its duration. There were a lot of going up and down the stairs, and the movie’s tone shifts with the escalation and deescalation, which I personally saw as showing the ups and downs of the hardships of life. And the cinematography was exquisitely executed to portray these different tones and messages. The cinematography really puts you in the scenes, and the music shifts the movie around several times in seamless but definitive manner.

I honestly do not have any real negative things to say about this film. It was amazing, and definitely a masterpiece. I loved it. However, one thing that may not be loved by everyone is that it leaves you with a strange feeling once you’re done watching. I’ll just leave it at that.

Also, it’s not a family film. Don’t watch with your parents or kids. It’s not highly sexual or gory, but there definitely are scenes that can make you very uncomfortable when watching with family. 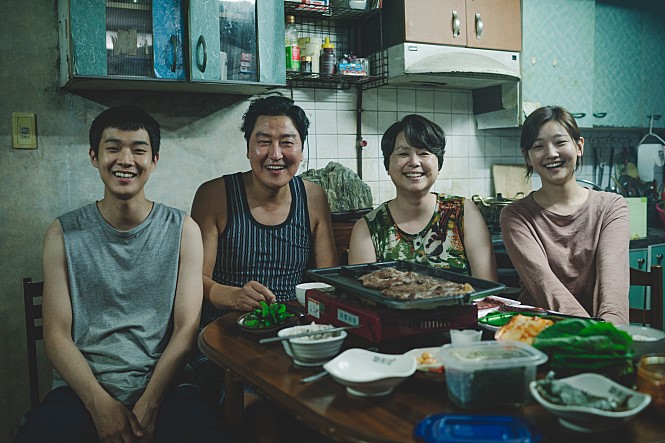 I tried to refrain from giving too much detail for the sake of keeping that mysterious element, which is crucial when going into <Parasite>. But this is a must watch; you just don’t want the film to end. Once the movie concludes, it leaves you speechless and you don’t want to leave your seat. You think “How on earth does Bong Joon-Ho think of something like this?”
The last 10 minutes was crazy… It was shockingly shocking… All in all, the title ‘Parasite’ was a great depiction of the film once you understand the underlying meaning behind the story. By far the best movie I’ve reviewed thus far on EonTalk!