Hello everyone and welcome back to another post by EonTalk! In today’s content, we will be going over 10 of my favorite Lee Byung-Hun movies.


As with other recommendation videos, I’ll be introducing 10 of my favorite movies Lee Byung-Hun starred in. I won’t be including a detailed synopsis, but will just be giving a short description of the film. Also, the movies were ranked according to my sole opinion of the rating of the movie + the suitability and role of the character Lee Byung-Hun played in the film. I tried to include both older and newer films to keep a good balance, and it goes without saying that only movies that I’ve personally seen will be included. Also, there are two upcoming movies starring Lee Byung-Hun which look very promising, and I’ll go over those later, so be sure to stick around til the end.

Okay then, let’s get right into today’s list of my favorite Lee Byun-Hun movies.

This action drama had two directors: Lee Hae-Jun and Kim Byung-Seo. Lee Hae-Jun directed <Castaway On The Moon> and <My Dictator>, and Kim Byung-Seo co-directed <Cold Eyes>. The film had a lot of anticipation surrounding it, as it had an incredible cast lineup of Ha Jung Woo, Don Lee aka Ma Dong-Seok, Jun Hye-Jin, Suzy, and of course, Lee Byung-Hun. Looking just at the cast, it builds great anticipation, and you have no idea how excited i was for the film. However, the movie itself wasn’t all that great. One thing to note, though, is that it had great action and the acting by Lee Byung-Hun and Ha Jung-Woo were good as usual. It’s just the story that was really disappointing; it just felt as if I’ve seen the movie somewhere before, as it had a pretty common premise. The film revolves around Mt. Baeku, the largest volcanic mountain on the Korean peninsula, that’s on the verge of erupting. If it does erupt, it would completely destroy the Korean Peninsula, and so the characters must do whatever it takes to stop the eruption and save its people. I’d give the movie a 6 out of 10, and Lee Byung-Hun’s character a 7 out of 10. 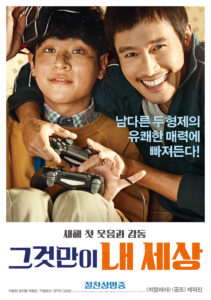 This comedic drama film was directed by Choi Sung-Hyun, and starred the likes of Yoon Yeo-Jung and Park Jung-Min, alongside Lee Byung-Hun, and showed the more lighter, comedic side to Lee Byung-Hun. It showed how versatile Lee Byung-Hun is as an actor, as he can not only be in action, crime, and thrillers, but comedic dramas as well. The film is an emotional comedic film revolving around two brothers, the older a former boxer, and the younger a mentally challenged individual. The movie gets emotional, so prepare the tissues! I give the film a 6.5 out of 10, and the character score an 8 out of 10. 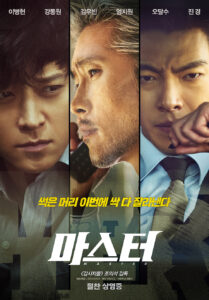 <Master> was a crime film that was directed by Jo Eui-Seok, who’s also directed <The World Of Silence>. He also co-directed <Cold Eyes> alongside one of the two directors of <Ashfall>. Lee Byung-Hun starred in this film with Kang Dong-Won, Kim Woo-Bin, Uhm Ji-Won, Oh Dal-Su, and Jin Kyung, and I saw this movie once when it first came out, and to be honest, when you ask me what the movie is about, I can’t really give a good answer. All I remember is that I had a really good time watching it, and I think it’s about time to rewatch it again soon. The film is about a chairman of a major company who is actually a conman, and the Intelligence Crime Team trying to capture him. I give the movie a 7 out of 10, and Lee Byung-Hun’s character an 8 out of 10. 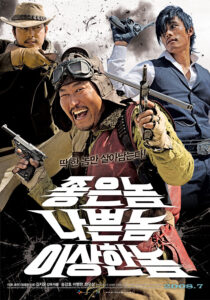 Directed by the renowned director Kim Ji-Woon, who’s famous for directing <A Tale Of Two Sisters>, <A Bittersweet Life>, <I Saw the Devil>, <The Age of Shadows>, and <Illang: The Wolf Brigade>, this is a type of film that’s very rarely seen, or even attempted, in Korean cinema. The movie is a mixture of action, comedy, adventure, and western; yes, western. A western-style movie out of Korean cinema is most definitely uncommon. Lee Byung Hun just looks extremely badass, even from the poster of the movie, as so does Song Kang-Ho and Jung Woo-Sung. The film takes place in the lawless land of the 1930s, where two outlaws and a bounty hunter fight for a treasure map. I give the film a 7.5 out of 10, and Mr. Lee’s suitability an 8.5 out of 10.

The #6 movie is the newest film on this list, <The Man Standing Next>. 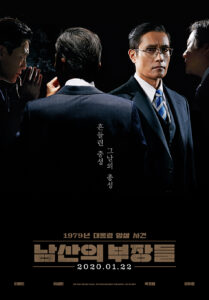 <The Man Standing Next> was directed by Woo Min-Ho, the director of the films <The Spies>, <The Drug King>, and <Inside Men>. <The Man Standing Next> stars the likes of Lee Sung-Min, Kwak Do-Won, Lee Hee-Jun, and Kim So-Jin, alongside Lee Byung-Hun, and the movie is a backstory of the assassination of President Park in October of 1979, and with this, Lee Byung Hun showed why he’s considered one of the bests when it comes to acting. This was one of his best performances recently, and was just jaw dropping. The movie was good, but it’s his acting that made this a must watch. I give the movie an overall score of 7, and Lee Byung-Hun’s performance a 9.5. 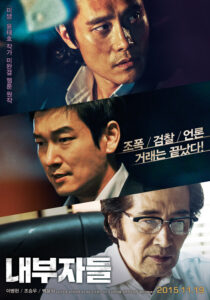 <Inside Men> is a crime drama directed by the same director of the #6 film, Woo Min-Ho, and the film starred the likes of Lee Byung-Hun, Cho Seung-Woo, and Baek Yoon-Shik. This is one of the best crime movies out of Korean cinema, and is a story of a man trying to get back at a politician, while a prosecutor tries to get dirt on them. Lee Byung-Hun plays a very unique character in this, and I can’t think of anyone else that could’ve played the role better than him. The scene of him with the fake hand is one of those scenes that’s embedded in my mind when thinking of memorable movie scenes. I give the film an 8.5 out of 10, and Lee Byung-Hun’s character an 8.5 out of 10 as well.

<A Bittersweet Life> is a classic when it comes to crime action films, and the movie was directed by the same director of the #7 film <The Good, The Bad, The Weird>, Kim Ji-Woon. The film stars the likes of Lee Byung-Hun, Kim Young-Chul, Shin Min-Ah, and Hwang Jung-Min, and this movie was featured this in my “Best Korean Gangster Movies” video. The movie also has great action, and really showcased the young Lee Byung-Hun’s potential as an actor. His voice, mannerism, and overall image suited the role so well. The film revolves around a mobster who doesn’t follow his boss’ order, and so, becomes the target of the gang. I give <A Bittersweet Life> an 8.5, and Lee Byung-Hun’s character a 9.

This ruthless crime thriller was directed by, once again, Kim Ji-Woon. <I Saw the Devil> featured two of the most talented actors in Korea, Lee Byung-Hun and Choi Min-Shik, and the movie gets very thrilling and keeps you at the edge of your seat. I rewatched this movie numerous times, yet still want to go back to it and watch it again. The film is about a man who’s wife was murdered gruesomely, and he tries to get his revenge on the murderer. I give both the movie and character scores a 9 out of 10 for <I Saw the Devil>

And now, just two movies left. The #2 movie is the oldest film on this list, being released in September of 2000, <Joint Security Area>. 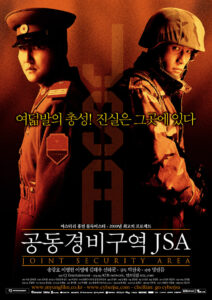 Directed by one of the legends when it comes to Korean directors, Park Chan-Wook, who’s directorial works includes <Sympathy for Mr. Vengeance> <Sympathy for Lady Vengeance>, <Oldboy>, <Thirst>, and <The Handmaiden>, <Joint Security Area> was such a great movie with incredible chemistry between the cast members. The movie starred Lee Byung-Hun, Lee Young-Ae, Song Kang-Ho, Kim Tae-Woo, and Shin Ha-Kyun, and is a movie with lots of genres. Mystery, comedy, war, drama, are all elements found in <Joint Security Area>, and it literally has all of those elements, as it’s funny, mysterious, gets very intense, and has good action and drama as well. I recently rewatched this, as it was on the Korean Netflix, and even though the movie is 20 years old, it has aged very well, and is still very fun to watch. The “Joint Security Area” is the border between South and North Korea, and the movie revolves around a shooting that occurs on the JSA, and the mysterious truth behind what really happened. I give the movie a 9.5 out of 10, and Lee Byung-Hun’s role a 9 out of 10.

This historical drama was directed by Chu Chang-Min, who’s other works include <Mapado>, <Lost In Love>, <I Love You>, and <Seven Years of Night>. The film starred Lee Byung-Hun, Ryu Seung-Ryong, and Han Hyo-Ju, and this is the movie that gave Lee Byung-Hun the title “10 million actor.” This is the best performance by Lee Byung-Hun, in my opinion. He plays double roles in <Masquerade>, one of which is a more serious character, and the other a more comical one. And although the two characters are very different in tone, he pulled it both off so well. You almost think they were played by two different actors. The film is about the king who falls ill, and so, a common man who looks exactly like the king is hired as a replacement in order to prevent the country from going into chaos. I give <Masquerade> a 9.5 out of 10, and Lee Byung-Hun’s role in the film a 10 out of 10.

As mentioned in the beginning, there are also two upcoming movies that Lee Byung-Hun will be starring in. The first is a film titled <Concrete Utopia> (title is subject to change).

The film will be starring Lee Byung-Hun, alongside Park Seo-Jun and Park Bo-Young, and just from that I’m very excited for the movie. The movie is a disaster-thriller, and will be about the remaining ruins of Seoul following a major earthquake, and the survivors gathering at the Imperial Palace Apartments to stay together.

The other upcoming movie is a film titled <Emergency Declaration>. 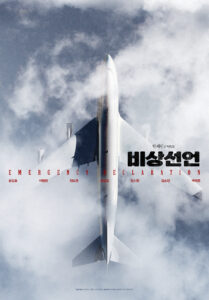 Although <Concrete Utopia> also had a solid cast lineup, the cast of <Emergency Declaration> is just on another level. The film will be starring the likes of Song Kang-Ho, Lee Byung-Hun, Jeon Do-Yeon, Kim Nam-Gil, Lim Si-Wan, Kim So-Jin, and Park Hae-Jun. I’m so excited for this one. This is also a disaster film, and is about an airplane that declares an unconditional landing in the face of an unprecedented disaster.

And that’s it for today’s content on 10 Must Watch Lee Byung-Hun Movies. I sincerely do thank everyone that read til the end, and if you would like to further communicate with me, as well as other K-movie fans, join the EonTalk Telegram. Also, support me on Patreon if you would like to help me make more diverse content!