“We’re not men disguised as wolves, we’re wolves pretending to be human…”

The first time I saw the trailer for <Illang: The Wolf Brigade> was when it played as a preview in theaters back in early July. The immediate reaction I had was “what is this… this looks horrible….” I thought it looked like a bootleg version of <The Terminator>. Contrary to what I said in my last review on <I Can Speak>, apparently you can judge a book by its cover for certain movies. From the trailer, this seemed like it had all the elements needed to make a great film; great actors, believable CGI, critically-acclaimed director, amazing action sequences. Yet, maybe due to its seemingly dull and overplayed story it portrayed through its trailer, it just didn’t grab my interest. Nonetheless, being one of the most-anticipated summer films of 2018 (although it flopped), I decided to watch and review it. Long story short, I’m glad I didn’t pay to watch this in theaters. 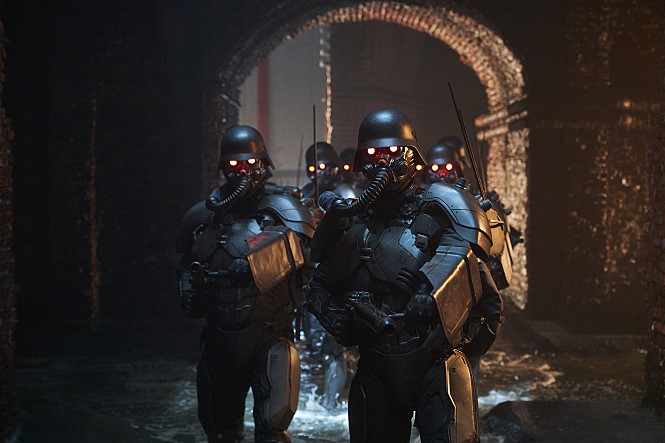 <Illang: The Wolf Brigade> is an adaptation of a Japanese manga and an animation film titled <Jin-Roh: The Wolf Brigade>. Directed by Kim Jeewoon, who also directed the Korean household names <I saw the Devil>, <The Good, The Bad, The Weird>, and <A Bittersweet Life>, as well as the American film <The Last Stand> starring Arnold Schwarzenegger, Kim is famous for being able to produce a wide-range of genres of motion pictures. The cast members are just as impressive, with an A-list lineup of Korea’s favorite stars: Gang Dong-Won, Han Hyo-Joo, Jung Woo-Sung, Kim Moo-Yul, and Shinee’s Minho. The movie also had a huge budget of 19 billion KRW, roughly $17 million USD. This is about $5,000,000 more than the budget of a typical Korean feature film.

Despite its outstanding production team, cast members, and insane budget, the film did horrible at the box office, underselling its breakeven point by a heavy sum. Makes you wonder where all that money was spent, and why it was spent on such useless things that didn’t add any real positive elements to the film. Sure, the action scenes were pretty cool and the film settings were good, but did they really need to spend millions? The audience and critic responses from both Korea and overseas were gruesome, and I have yet to hear someone say this movie was anything more than tolerable. Furthermore, this was the fastest I’ve seen such an anticipated film get pulled from theaters in Korea thus far.

The year is 2029. North and South Korea have declared a 5-year plan for reunification, and this has led to pandemonium on the Korean peninsula. With economic sanctions from the global superpowers, the US, China, and Japan, an uproar breaks out from the Korean people, and a terrorist group, known as “The Sect” is born. This group is against the reunification of the two Koreas, and in order to abolish this organization, a new “Special Forces Unit” is established by the Korean government. Under the direct control of the Korean president, the Special Forces Unit is now in control of the political initiatives of the peninsula, and subsequently led to a decrease in authority of the intelligence agency, “Public Safety Department.” Thus, the Public Safety Department plans a conspiracy against the Special Forces Unit to eradicate the Unit as a whole. Meanwhile, rumors of a secret organization of human weapons within the Special Forces starts to surface, known as “Illang, the Wolf Brigade.”

In spite of hearing only negative remarks about the film, I tried having an optimistic outlook going into the movie. I really really tried to not let other people’s opinions stray me from the film. However, I could not help but agree with most of what everyone was saying about the film while watching. “The Good” parts of the movie were scarce, but I came up with mainly 3 that I personally thought were decent.

First, the action scenes. The action segments of <Illang: The Wolf Brigade> were well choreographed and performed. The scenes at the Namsan Tower in Seoul was impressive, as the tower itself is something we see normally in everyday life, but to see a full-out action sequence take place there was something new.

The acting was okay, I guess. I mean, it’s definitely not the best performances by the phenomenal actors, but it showed that they can put on a show even with a horrible, horrible storyline. However, it absolutely did not show the full potential of the fan-favorite artists. Gotta say, it’s not the actors’ fault that the movie failed. The narrative in general was awful.

Lastly, the visuals and effects of the film were good. The first part of the movie where it begins by giving the background status of the Korean peninsula in 2029 was great and had me intrigued (that was basically the only part that I was engaged in, though). I could tell that a lot of money was invested into the effects, props, and settings of the scenes, but then again like I mentioned before, was it really necessary to spend that much? I guess if it didn’t, that’d mean one less “Good” for the film in general… *shrugs*

Have you seen the movie <Real>, starring Kim Soo Hyun? It’s been deemed as the worst movie out of Korean cinema by many. If you have seen it, this was comparably bad as that; if you haven’t, how much for your virgin eyes? There was no real purpose in the film, and I had a very hard time understanding wtf was going on. I had to rewind and re-watch in the middle because the storytelling was just horrendous, and because of its difficulty, I had a really hard time engaging in the movie. Furthermore, it seemed as if it didn’t know if it wanted to be an action film, or a melodrama. It goes back and forth between the two, and not in a good way. It almost felt as if even the actors didn’t even know what was going on. I mean, I assume the actors read the scripts before they signed onto the film? Maybe the script made the movie seem a lot better than the actual film. 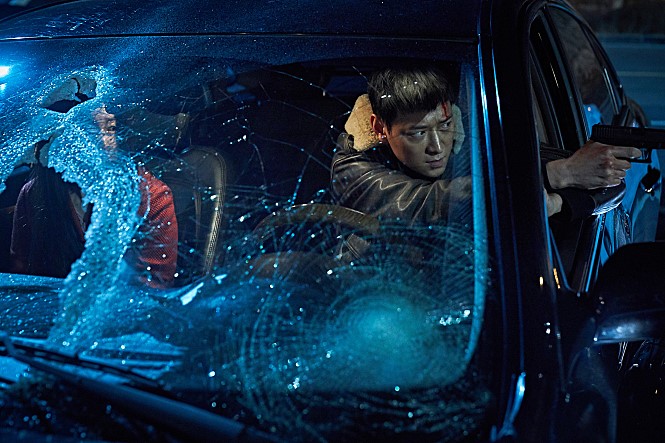 The story takes place in the future, the year 2029 to be exact. However, minus the beginning scenes, the movie overall felt like it took place in the past. I mean, this may be due to it lacking reality. But then again, if it takes place in the future, anything can happen; so, reality may not be such a big factor. However, I felt like it went overboard and that the movie didn’t make sense in general. Furthermore, the execution of the storytelling was poorly done.  There were several “wait wut?” moments. “Surely they’ll explain later” but ended with no point or purpose whatsoever. What were they trying to accomplish? What were they trying to be? There were meaningless action segments that makes you wonder why it was included in the film. There was a bad balance between the action and dialogue in general, with many useless actions without any purpose.

Ultimately, <Illang: The Wolf Brigade> felt like a combination of many good films in one- less the good. It was as if they tried pulling together the good scenes from many films and trying to put together a puzzle that didn’t have an outer frame. It lacked identity, purpose, and direction; if you’ve seen the trailer, that should be sufficient. No need to sit through 138 minutes of disaster (plus, if you’ve seen the trailer, you’ve already been spoiled).

I went into movie thinking “wonder what it’s going to be about?” I came out thinking “so, what was it about?” I’m just glad I didn’t pay for a ticket to watch this in theaters.