Hello everyone and welcome back to another post by EonTalk! Today, I’ve got something different – In today’s post, I’ll be combining Korean movies with another Korean industry that’s taking the world by storm: K-pop.


K-pop, or Korean pop, has gained massive interest and popularity globally, and is one of the crucial reasons why Korean dramas and Korean movies have also been so internationally widespread. And we’ve got the idols, or the K-pop singers, who have crossed into the field of acting to thank for that as well. Therefore, in today’s video, we will be taking a look at 10 idols who’ve also successfully ventured into the field of acting.

Before getting into the video, I’d like to set the criteria of the rankings. I put the most emphasis on idol-turned-actors in K-movies. While I do acknowledge that there are a ton of great and talented idols in K-dramas, I put more emphasis on those that starred in Korean movies specifically, as this is a K-movie channel. Therefore, although there are idols that starred in numerous K-dramas, if they didn’t star in or only starred in one or two movies, then they wouldn’t of made it on this list. If you would like another video with more idol-turned-actors, let me know in the comments and I can make a sequel!

Also, the idols’ acting talent and performance was considered as well. And most importantly, the ranking is based on my personal opinions, and are totally subjective and biased towards my opinions. Okay then, without further ado, let’s get into the list of my Top 10 idol-turned-actors.

Starting off the list, the first idol-turned-actor I’ve selected was Seol Hyun. 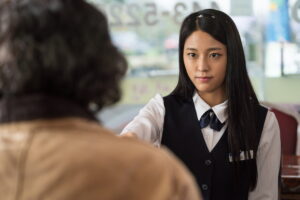 Seol Hyun is a female idol from the group AOA, or Ace of Angels, who debuted in July of 2012. Seol Hyun starred in the movies <The Great Battle>, <Memoir of a Murderer>, <Gangnam Blues>, and most recently made a special cameo in <P1H>. She made her K-movie debut with <Gangnam Blues>, released in 2015, and her acting debut with the K-drama “Seoyoung My Daughter,” which aired in 2012. She’s also starred in other K-dramas such as “Awaken,” “My Country: The New Age,” “Orange Marmalade,” and “Ugly Alert.” Seol Hyun not only starred in movies and K-dramas, but also became one of the hottest stars in variety shows as well as commercials. My personal favorite movie she starred in was <Memoir of a Murderer>.

Next, the #9 idol-turned-actor that I chose was Soo Young.

Soo Young is another massively popular female idol, who made her debut in 2007 with arguably one of the biggest girl groups to debut in Korea, Girls’ Generation. Girls’ Generation is one of the most popular K-pop girl groups that paved the way for others, from one of the Big 3 companies in the industry, SM Entertainment. Soo Young starred in the movies <Miss and Mrs. Cop>, <Memories of a Dead End>, and <Hello Schoolgirl>. She made her movie debut with <Hello Schoolgirl> back in 2008, in which she had a minor role, and her overall acting debut with the K-drama “Unstoppable Marriage,” which aired in 2007. She’s also starred in many other K-dramas like “Run On,” “Tell Me What You Saw,” “Man in the Kitchen,” “Squad 38,” “My Spring Days,” “Dating Agency: Cyrano,” and “The Third Hospital.” I personally thought her most recent film <New Year Blues> was her best work in terms of K-movies.

Moving along, the #8 idol-turned-actor I’ve picked was TOP aka Choi Seung-Hyun. 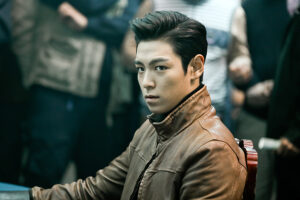 TOP is an idol from the legendary group Big Bang, who debuted in August of 2008, which is the oldest on this list. This makes him the idol with the longest experience, or the “seonbae,” of all else on this list. As with Girls’ Generation from the previous idol, Big Bang is an extremely popular and talented group that has immense influence even till this day, and definitely paved the road for following idols. The group was formed by another company from the Big 3, YG Entertainment, and TOP starred in movies such as <Tazza: The Hidden Card>, <Commitment>, and <71: Into The Fire>, and made his K-movie debut with <71: Into the Fire>, which released in 2010. However, he made his acting debut with the K-drama “I am Sam,” which was broadcasted in 2007. TOP also starred in other K-dramas such as “Secret Message,” and “IRIS,” the latter being one of my personal favorite K-dramas in general, and as for my favorite movie he starred in, I thought he was excellent in the war film <71: Into the Fire>.

The #7 idol-turned-actor I selected for this list was Yoona.

Yoona is another idol from the previously mentioned group Girls’ Generation, and starred in the films <Exit>, <Confidential Assignment>, and an upcoming movie titled <Miracle>. She made her K-movie debut with <Confidential Assignment> in 2017, but her official acting debut 10 years prior with the K-drama “Two Outs in the Ninth Inning,” which aired in 2007. Not only this, but she’s been in numerous other K-dramas such as “Hush,” “The King in Love,” “The K2,” “Prime Minister & I,” “Love Rain,” “Cinderella Man,” and “You Are My Destiny,” and although she received a lot of criticism for her acting, I thought she was excellent in the 2019 film <Exit>, which was my favorite amongst her movies.

Moving onto the #6 idol-turned-actor, the 6th idol I picked was Minho, or Choi Minho from the group Shinee. 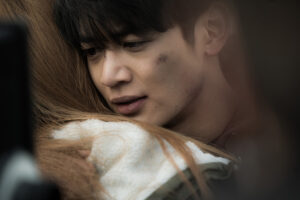 Another group from SM Entertainment, Shinee gained extreme popularity right from their debut, which was in May of 2008. Minho starred in the K-films <Battle of Jangsari>, <Illang: The Wolf Brigade>, and <Derailed>, and made his movie debut with <Canola> in 2016. As for his overall acting debut, he first appeared in a drama special titled “Pianist” in 2010. Some of his other K-drama works includes “The Most Beautiful Goodbye,” “Somehow 18,” “Hwarang: The Poet Warrior Youth,” “My First Time,” “Medical Top Team,” “To the Beautiful You,” and “Salamander Guru and The Shadows.” My personal favorite movie of his is the crime-action film <Derailed>.

Now going into the top 5, the #5 idol-turned-actor I chose for this list was Junho. 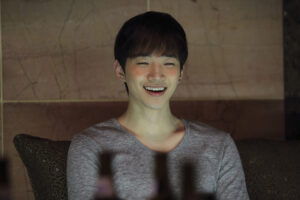 Junho, or Lee Junho, is from the group 2PM, a boy group made by the third from the Big 3, JYP, which made their debut in September of 2009. Junho starred in the K-films <Homme Fatale>, <Memories of the Sword>, and <Twenty>, and he made his movie debut with <Cold Eyes> in 2013. This was also his acting debut, but he also starred in the K-dramas “Confession,” “Wok of Love,” “Rain or Shine,” “Good Manager,” and “Memory Highlights.” From humorous to more serious roles, Junho played a lot of diverse roles, but my favorite has to be his comedic film <Twenty> from 2015.

The next idol-turned-actor I’ve selected was Lee Joon. 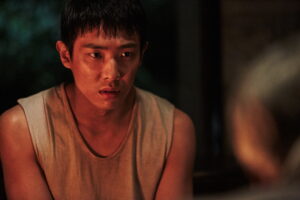 Lee Joon is an idol from the group MBLAQ, which debuted in 2009. There was massive hype surrounding the debut of this group, as the producer was one of the biggest idol himself during that time, Rain. Lee Joon starred in the films <Luck-Key>, <The Piper>, and <Rough Play>, and was a voice actor in the prequel to <Train to Busan>, <Seoul Station>. What’s interesting with Lee Joon is that he actually made his acting debut prior to his idol debut, playing the younger role of Rain in <Ninja Assassin>. He not only starred in movies, but also K-dramas, including “My Father Is Strange,” “Woman with a Suitcase,” “The Vampire Detective,” “Heard It Through the Grapevine,” “Mr. Back,” “Gap-dong,” “IRIS2,” and “Jungle Fish 2.” My favorite movie he starred in was <Luck-Key>.

Moving along, the third idol I picked that ventured into acting was Suzy. 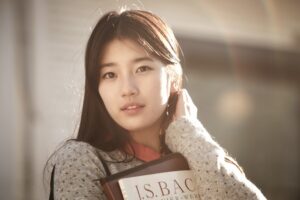 Bae Suzy first made her TV appearance in the audition show “Superstar K,” which caught the eyes of JYP, and made her debut with the girl group Miss A in July of 2010. Suzy starred in the movies <Ashfall>, <The Sound Of A Flower>, and has an upcoming film titled <Wonderland>. She made her movie debut with the film <Architecture 101>, released in 2012, and her acting debut with the K-drama “Dream High,” which aired in the same year. Suzy also starred in K-dramas “Vagabond,” “While You Were Sleeping,” “Uncontrollably Fond,” “Gu Family Book,” “Big,” and of course, the recent K-drama that had immense global popularity, “Start-Up.” My personal favorite K-movie of Suzy is the melodrama <Architecture 101>.

And now, just two picks left. The #2 idol-turned-actor I chose for my list of Top 10 is Lim Siwan. 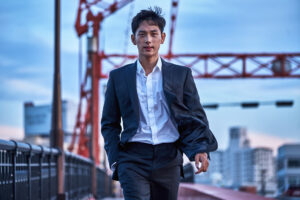 From the boy group ZE:A, Lim Siwan made his entertainment debut in 2010. Siwan is one of the most talented actors, starring in the movies <The Merciless>, <One-Line>, <A Melody to Remember>, and <The Attorney>, and has upcoming movies titled <Emergency Declaration> and <Boston 1947>. He made his movie debut in 2013 with the well-received <The Attorney> and his overall acting debut with the K-drama “Moon Embracing The Sun,” which aired in 2012. He’s got a long list of K-dramas he starred in as well, such as “Run On,” “Strangers from Hell,” “The King in Love,” “Triangle,” “Waiting for Love,” “Standby,” “Man from the Equator,” and my favorite, “Misaeng.” My favorite movie that he starred in has to be <The Attorney>. 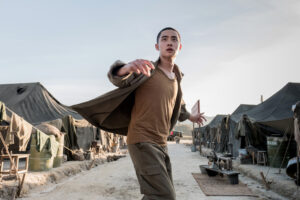 DO, aka Do Kyung-Soo, is from the group EXO, which debuted in April of 2012. Produced by SM Entertainment, EXO is one of the biggest idol groups, having numerous talented members, and DO is one that has crossed into the field of acting, and has been absolutely killing it. Starring in the films <Unforgettable>, <My Annoying Brother>, <Room No.7>, the two <Along with the God> movies, <Swing Kids>, and being a voice actor in <Underdog>, DO made his movie and overall acting debut with the film <Cart> in 2014. He has the longest list of movies, and has also starred in the K-dramas “It’s Okay That’s Love,” “100 Days My Prince,” “Be Positive,” and “Hello Monster.” DO was recently discharged from the mandatory Korean military on January 25th, and so we can expect to see more movies of his soon! My personal favorite movie he starred in was the surprisingly underrated film <Swing Kids>, and I’m definitely looking forward to more of his works.

And that’s it for today’s post on Top 10 Idol-Turned Actors. Remember, there are a lot of other great idol-turned-actors, but this list was totally subjective to my opinion, and was based on the idols’ filmography, not K-dramas. However, I can make another content with more idol-turned-actors, and so if you like this hybrid between K-pop and K-movies, let me know in the comments! I’m thinking of having another post with old-school idol-turned-actors soon, so let me know what you think. With that being said, join the EonTalk Telegram group to further discuss with me and other Korean film enthusiasts. Finally, your support on Patreon will be very helpful in making more content. Once again, thank you to everyone that read til the end, and I’ll see you guys in the next one!