Hello everyone, and welcome back to another Korean movie review by EonTalk. Today’s movie review will be on the new action thriller out of Korean cinema, <Hostage: Missing Celebrity>.

<Hostage: Missing Celebrity> was directed by the first time feature film director Pil Gam-Sung, and featured one of my favorite Korean actors, Hwang Jung-Min. What makes this movie so special and different is the fact that Hwang Jung-Min is actually playing himself in the film. The movie revolves around the premise that Hwang Jung-Min, the actor, is kidnapped by a group of criminals, and is held hostage. Just that in itself had me intrigued and very fascinated on how they would play out the narrative. But before getting deeper into the review, let’s first take a look at the detailed synopsis of the film.

The synopsis is as follows:
After a film premiere, the famous actor Hwang Jung-Min is suddenly swept from the streets on his way back home. Thinking the event is a prank, the actor tries to stay calm, but he soon realizes the situation he’s in and the fact that he’s been kidnapped for ransom. The kidnappers demand a huge sum of money within 24 hours, or they’d kill him and the other hostage. Hwang Jung-Min continuously tries to stay composed, and uses all his skills to find a way out and escape from the situation, alive.

The movie doesn’t take long for the action to kick in. The intro is fairly quick and the kidnapping takes place within 10 minutes of the movie’s start. Also, there were some humorous scenes to keep the movie from going too serious. There weren’t too much of the comedic elements, but just when it felt like it was needed, they had them.

If you know me, Hwang Jung-Min is one of my favorite actors, and he was great as always. In the production trailer, he stated that it was really hard to play himself, and that a lot of people assumes that it should be easy to play oneself. However, he states that it’s actually really hard, as he’s never actually been kidnapped before.

But then again, I feel like that also doesn’t really make sense either, as you can play the role as if you, yourself were to be kidnapped. Like what would you do if you were in the situation, in real life? Nevertheless, he did great in the role, and who else better to play Hwang Jung-Min, than Hwang Jung-Min himself? 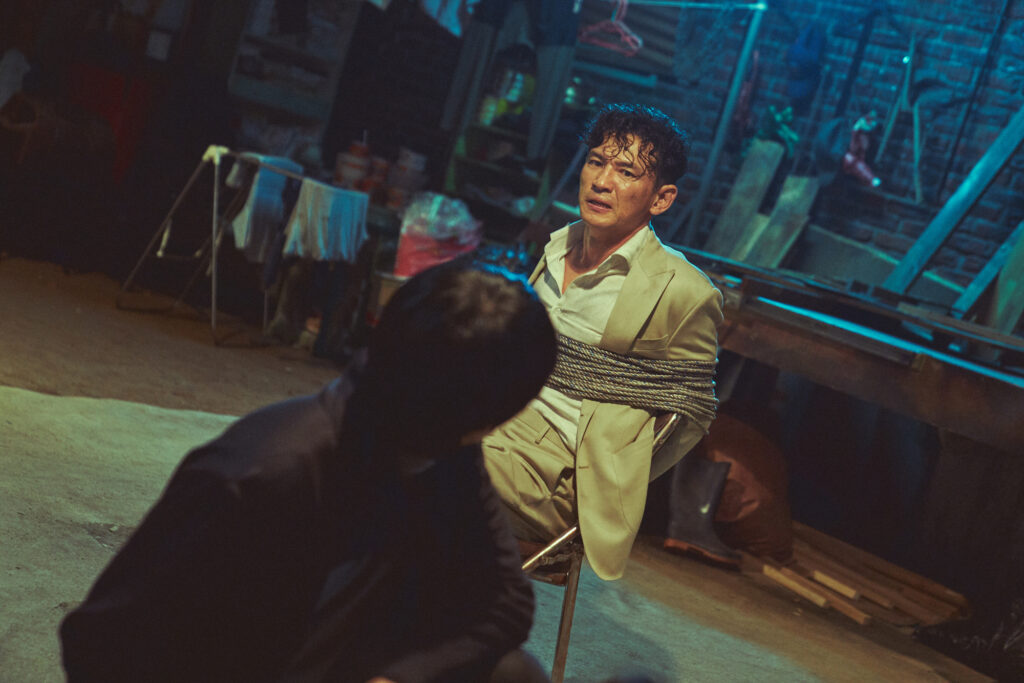 And because he played himself, it brought a new sense of thrill that’s unseen in other movies. It brought a new element to the film, breaking the fourth wall in a new way, or possibly the fifth or sixth? Anyways, it wasn’t just Hwang Jung-Min that was great, but the other roles were casted very well as well.

The main antagonist, Kim Jae-Bum, was a perfect fit for the boss role, and his acting was chillingly good. There’s something really freaky about him and his expressions; it’s hard to put into words, but there weren’t much expressions on his face, but that in itself put a chilling tone to the aura that he put out. A quiet but scary, total psycho character.

Other notable performances were of Lee Yoo-Mi, who played the other kidnapped person, who also starred in <Young Adult Matters>, and Ryu-Kyung-Soo, Jung Jae-Won, Lee Kyu-Won, and Lee Go-Jung, other members of the kidnapping gang. They purposely casted lesser-known actors, as if you think about it, if they casted well-known actors, they’d have to also play themselves, like how Hwang Jung-Min is playing himself. You can’t just have Hwang Jung-Min playing himself, while the other actors aren’t. 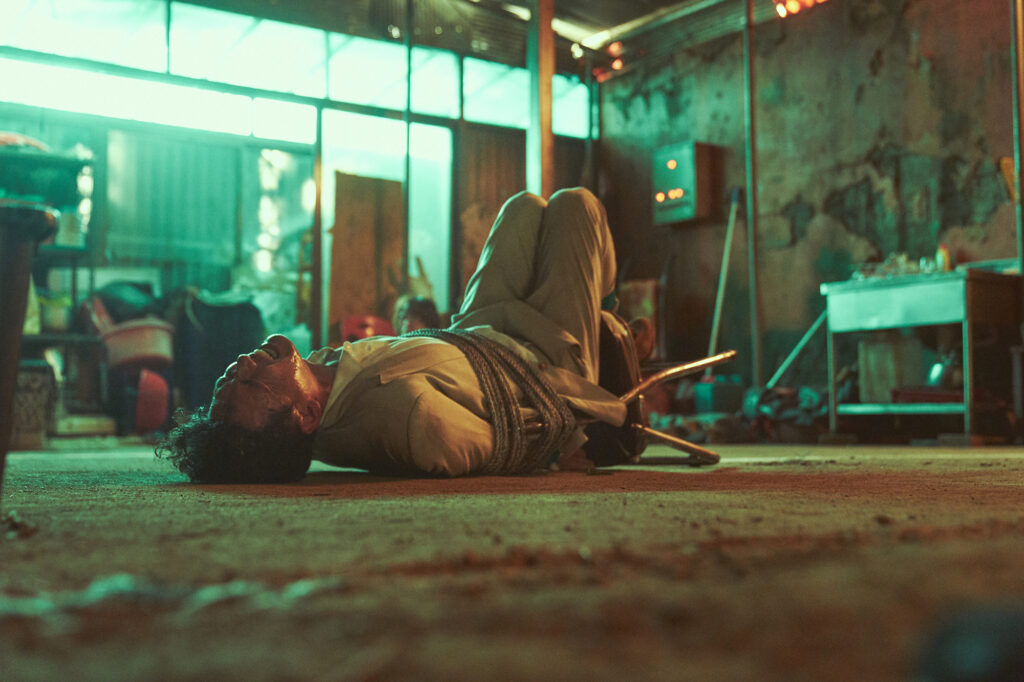 For example, if Kim Sung-Oh, an actor known for his villain roles, were to play the antagonist role in this, he’d have to play himself, but he’s not a kidnapper in real life. And thus, they casted lesser-known actors that wouldn’t contradict with the whole real-life/cinematic universe. And for the same reason, Hwang Jung-Min’s family weren’t in the film, as his real wife and kids can’t actually be in the movie.

There also was a cameo appearance by Park Sung-Woong, which was a good surprise as it was great to see him and Hwang Jung-Min reunited again after <New World>. References to that film, which was one of the best K-movies in my opinion, and their personal relationships outside of the celebrity life were portrayed as well.

There were some very obvious suspense points with the background music and camera angles/movements the movie had, which made it a little cringe and forced. I feel like they could’ve done a little better being less obvious in the emotions they were trying to deliver.

Moreover, the story itself wasn’t anything very special. It had cliches and borrowed from a lot of other similar thrillers. The movie dragged a little near the end, and I think this was the case because it felt like the story resolved, but started back up again a few times. Almost as if it was repetitively showing a resolution, only to open the conflict back up. The duration of the film is only about an hour and a half, and for a movie with that runtime to feel like it dragged, isn’t a good thing. Definitely could’ve been better in terms of the progression.

<Hostage: Missing Celebrity> is a thriller/chase/crime/action film that’s a pretty good watch. The movie had a good balance of suspense and action, and the biggest positive of the film was the acting performances given by the cast members. Although it lacked in the story development and progression departments, the movie was still a decent action thriller. I mean, the movie starred Hwang Jung-Min, so that in itself calls for a watch. 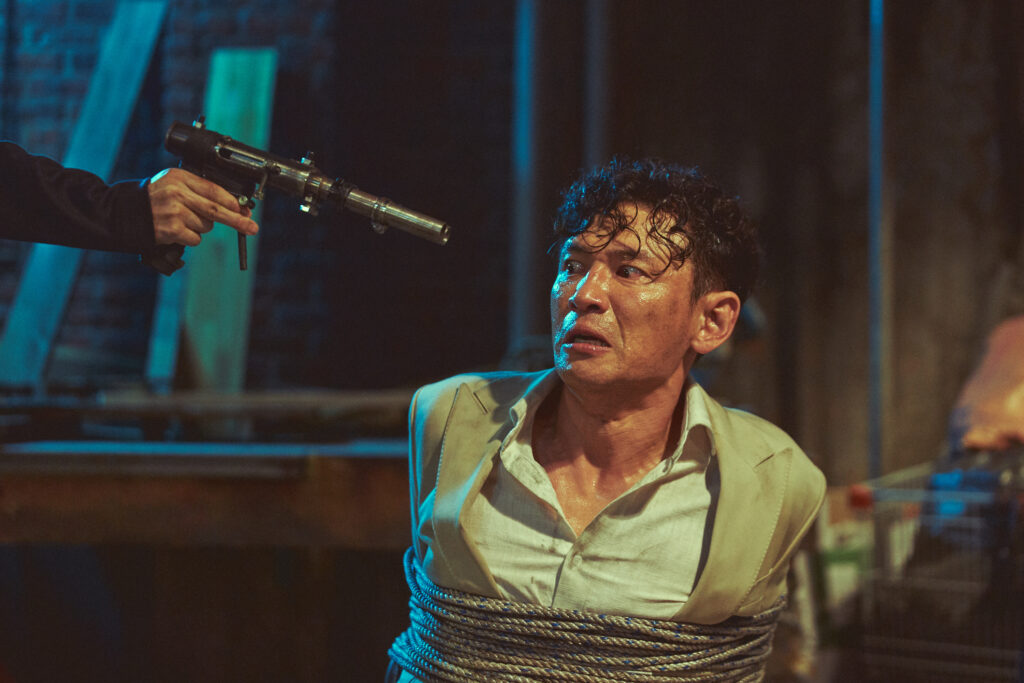