Hello everyone, and welcome back to another Korean movie review by EonTalk. Today’s video movie review will be on the new action drama, <Escape from Mogadishu>.

<Escape from Mogadishu> was directed by Ryu Seung-Wan, the director behind other great works such as <The Battleship Island>, <Veteran>, <The Berlin File>, and <The Unjust>. Because of his past works, I was really excited for this one, especially since the film also had an ensemble cast of Kim Yoon-Seok, Jo In-Sung, Heo Jun-Ho, Koo Kyu Kwan, Kim So-Jin, and Jung Man-Shik.

If you’ve seen the trailers or even by just the title, you can see that the movie is based on the city of Mogadishu in Somalia. Because of this, there were some negative remarks regarding the film, as the movie was set in Somalia but wasn’t shot in nor featured Somalian actors. However, I can assure you that the movie isn’t a film that’s making a political statement of Somalia or the state/history of Somalia, but revolves around and focuses on the encounters of the Koreans that were based in Somalia as ambassadors during the breakout of the civil war.

I’ll get deeper into this as we progress into the review, but please also note that as with all my other reviews, I’m going to judge this movie for what it is: a movie. I’m going to try to keep all other factors out, and try to give my unbiased opinions of the film as a film. That being said, let’s get into the review by first taking a look at the detailed synopsis of the <Escape from Mogadishu>.

The movie takes place prior to South Korea’s joining of the U.N., and when the civil war broke out in Somalia. There were comments left on the trailers of the film that the movie was looking down on or disrespecting Somalia, but there were no intentions of that. This was based on real events of Korean ambassadors based in Somalia, and is not a depiction of or a statement regarding the civil war itself, but is a portrayal of the ambassadors,’ their families,’ and the employees’ stories of their sides. There’s more than one perspective to all stories, and this was one angle coming from the Korean ambassadors’ side.

I’ll emphasize here once again, but I’m going to review the movie for what it is. And as a movie, I thoroughly enjoyed it. Let’s get right into what I found to be the good parts about <Escape from Mogadishu>. 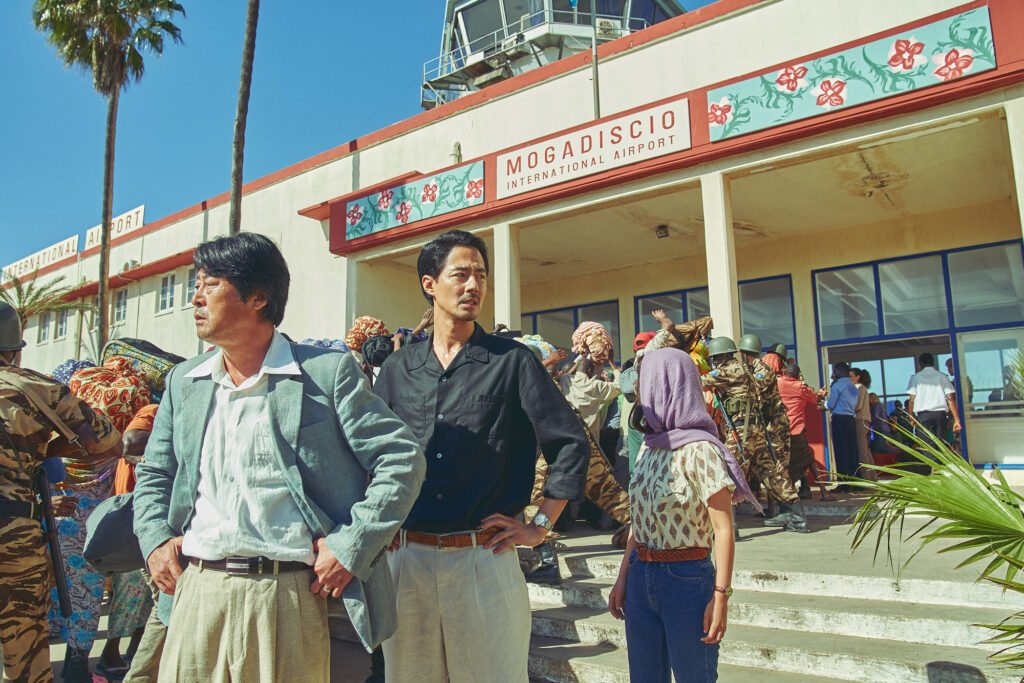 The casting was done superbly. Everyone fit their roles great; Kim Yoon-Seok and Jo In-Sung as the South Korea’s reps fit outstandingly, and Heo Jun-Ho and Koo Kyo-Hwan as the North reps were perfect as well. It’s incredible how they were able to find such great actors that fit the characters so perfectly. And it isn’t just the casting that was amazing. The performances given were what made it even better, both from the lead and supporting actors.

I usually say the English acting is bad with Korean actors, as it feels very unnatural and it takes you away from the film when the Korean actors speak English a lot. But with this one, I actually thought it was good. The English wasn’t perfect, which is why it made it good. The broken English of the Koreans felt natural, and if they actually were fluent with the accent and everything, it would’ve been even more unnatural.

Moreover, there were humorous scenes scattered throughout to keep the film from going too dark and serious. Many times with movies with a more serious tone such as this, it’s easy to lose the audience’s attention and go slightly overboard with the seriousness. However, I thought <Escape from Mogadishu> had a great balance, and especially with Jo In-Sung’s character I thought this was done very well. And it’s not only humor elements that shined, but also thrill, action, drama, suspense, and emotion were all there.

Another positive of the film was the cinematography. The production team did an excellent job in building the film set, and shows just how skilled and talented the Korean production teams are. It definitely is not a small feat to put on a production of that scale in a foreign land, and not something a lot of other film industries can accomplish. There’s so much planning that needs to be put in during the pre-production for something at this scale, but it was totally worth it as the film was incredibly shot. 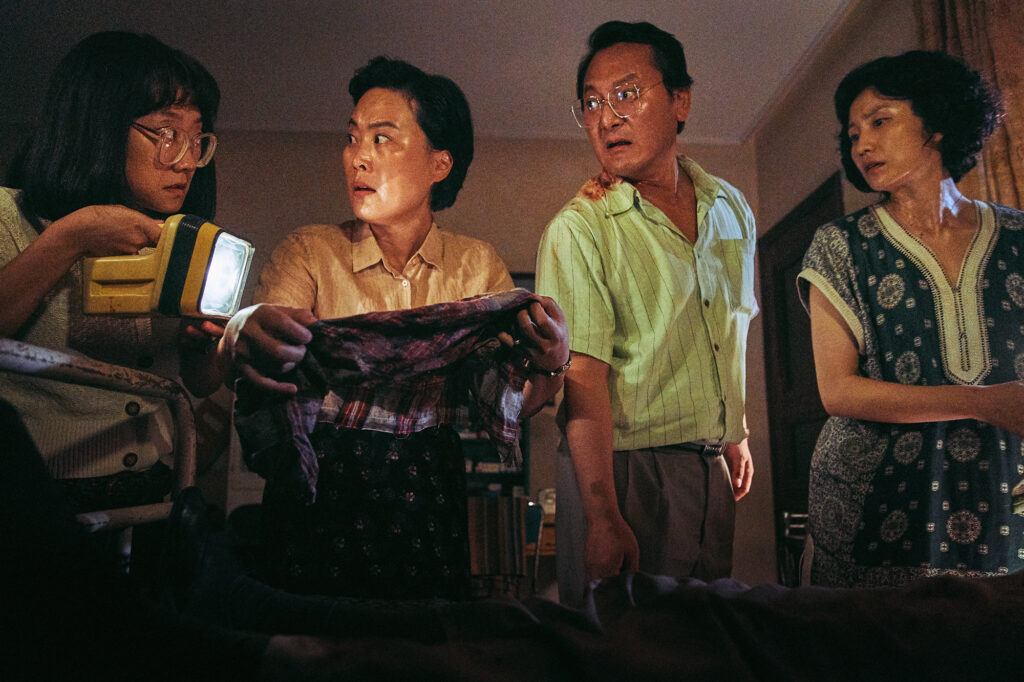 And finally, I won’t say too much regarding the ending, as I don’t want to give away major spoilers, but the it was very strong. The way the film concluded was very powerful and meaningful, and I loved how it was shot, especially in comparison to previous scenes earlier in the film.

Furthermore, the situations in the film could’ve been explained in better terms and on a deeper level. Some of the negative remarks the movie received could’ve possibly been solved, or at least partially, if it portrayed the different status and the severity of the conditions in a more sensitive manner.

And lastly, there weren’t real surprises and flowed as you’d expect it to. However, this does not mean the story was bad, nor that the progression was poor; it’s just that it is, to an extent, predictable. I don’t want to take away from its accomplishment of being an entertaining, enjoyable ride, though. 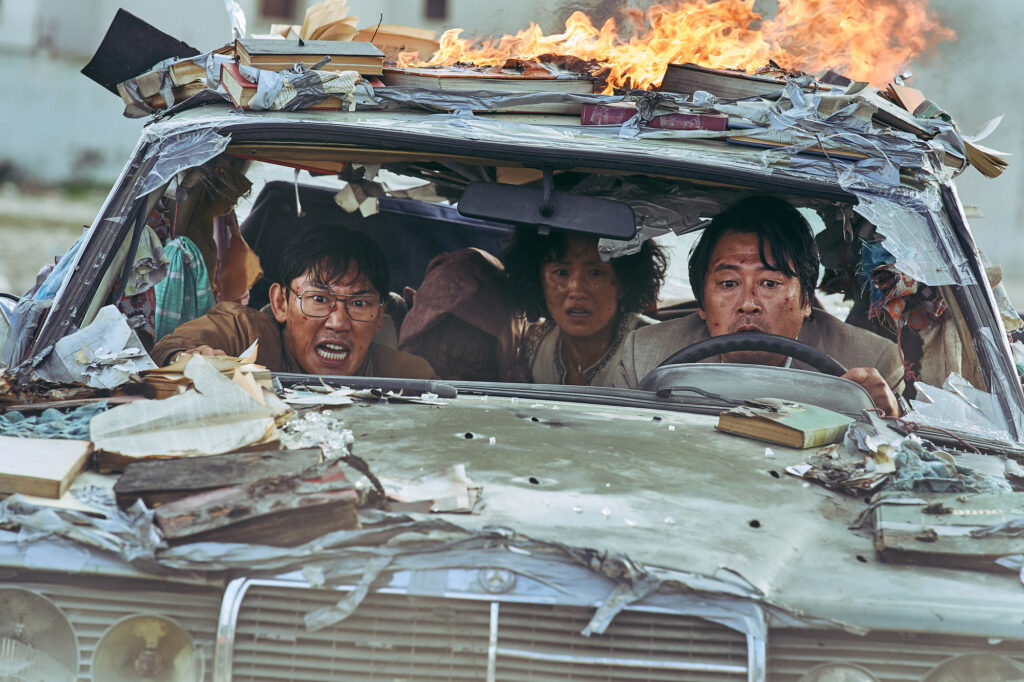 <Escape from Mogadishu> really places you in the scenes. You can feel the emotions, the suspense, and vibes of the situations, and that’s thanks to the amazing acting along with the cinematography and effects the film had. It reminded me of the film <A Taxi Driver>, another film based on historical events.

Korea’s had lots of security and national concerns in its history, and is sensitive to history as well, as eminent from the many historical movies taking place during the Japanese imperialism period, the era of democratization, and other significant time periods in history. There were no intent of misconstruing or making statements of Somalia and the civil war, and especially not with my review, but the focus of the film was more on the humanism elements, showing the relations between South and North Korea and how they can work together to live.

This was a strong start to the second half of 2021 for K-movies, and I’m definitely looking forward to what the rest of 2021 has to offer.