Hello everyone, and welcome back to another Korean movie review by EonTalk. Today’s written movie review will be on the action thriller, <Hard Hit>.

<Hard Hit> was directed by Kim Chang-Ju, who worked on the edits of numerous great movies, but I believe is making his feature film directorial debut with this movie. The film starred the leads Jo Woo-Jin, Lee Jae-In, Jin Kyung, and Ji Chang-Wook, and was based on the Spanish film <Retribution>. In its first week of release, it’s been retaining the #1 spot at the box office, and actually recorded to be the highest selling thus far in 2021. But does it really deserve that recognition? Before getting into the review, let’s take a look at the detailed synopsis of <Hard Hit>.

The synopsis is as follows:
Sung-Kyu, the head of a bank, receives a call from an unknown number on his way to work with his kids in the car. The mysterious voice warns that there is a bomb in the car, and that it’ll explode if he gets up. Sung-Kyu assumes the call is a voice phishing scam and doesn’t think much of it, until he soon witnesses his colleague’s car exploding in front of his eyes. Reality hits him, and he suddenly becomes the suspect in downtown Busan, with the police chasing him down. Unable to get out, hang up, or say anything to the authorities, Sung-Kyu must keep the unknown caller happy, and save his and his children’s lives.

The movie starts off with a bang. It gets your heart going from the beginning, and with its background music, the atmosphere is really well made. As mentioned briefly in the synopsis, the movie gets real, real quick after the first explosion. It does a great job at placing you in the shoes of the protagonist, and begs the question, “What would you do?” I’m sure I, as well as probably majority of other people, would think the unknown caller to be a scam as well. But once you find out the situation you’re in is real, how would you react?

And I think it’s because it begs these questions that makes the movie very thrilling and real. The situation is something that you and I, and every average person can find themselves in. It’s relatable, and you’re able to easily place yourself in the shoes of the protagonist. 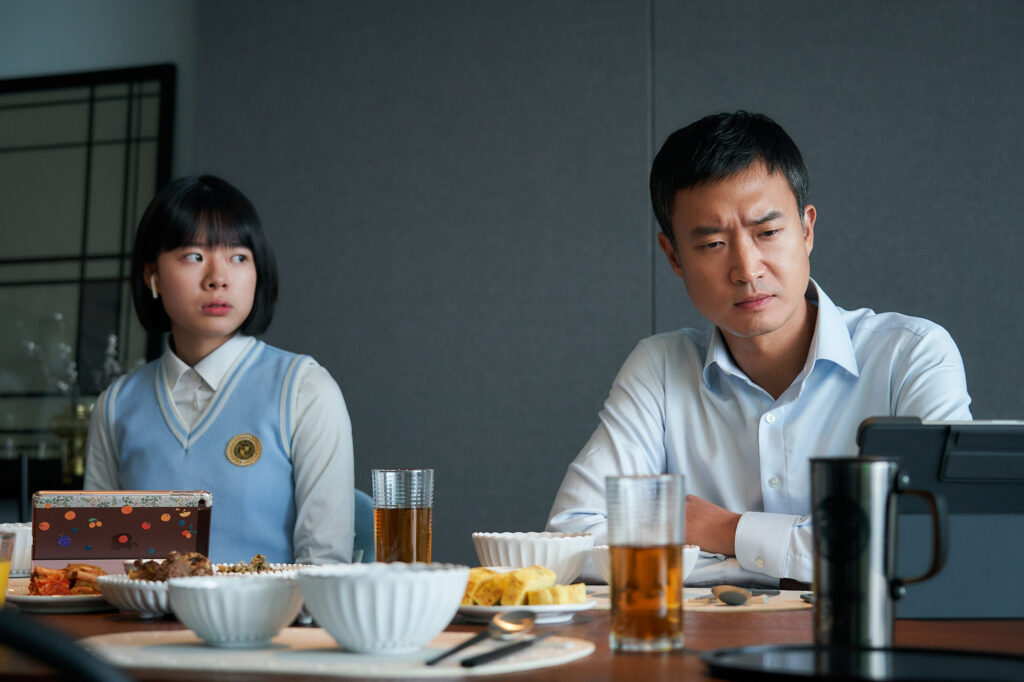 Also, because majority of the movie takes place in the vehicle, there are limitations of what can be done with the setting. However, I think they did a great job at building on those barriers and not letting it restrict the movie. The use of camera movements, angles, the shots it had, and just the cinematography overall was good and enhanced that action-heavy, suspenseful mood.

Furthermore, I thought that the casting was done great. Jo Woo-Jin played minor and supporting roles prior to this, and this was, I believe, his first time in a main, leading role. And I must say, he did a great job. And it isn’t just him that was good, but the acting by the cast members were overall great; from the daughter role, to the antagonist role, and the smaller, minor roles, there wasn’t anything to really complain about the movie in terms of acting.

However, the movie wasn’t without anything to complain about. Let’s move along to take a look at what I found to be the negatives about the film. 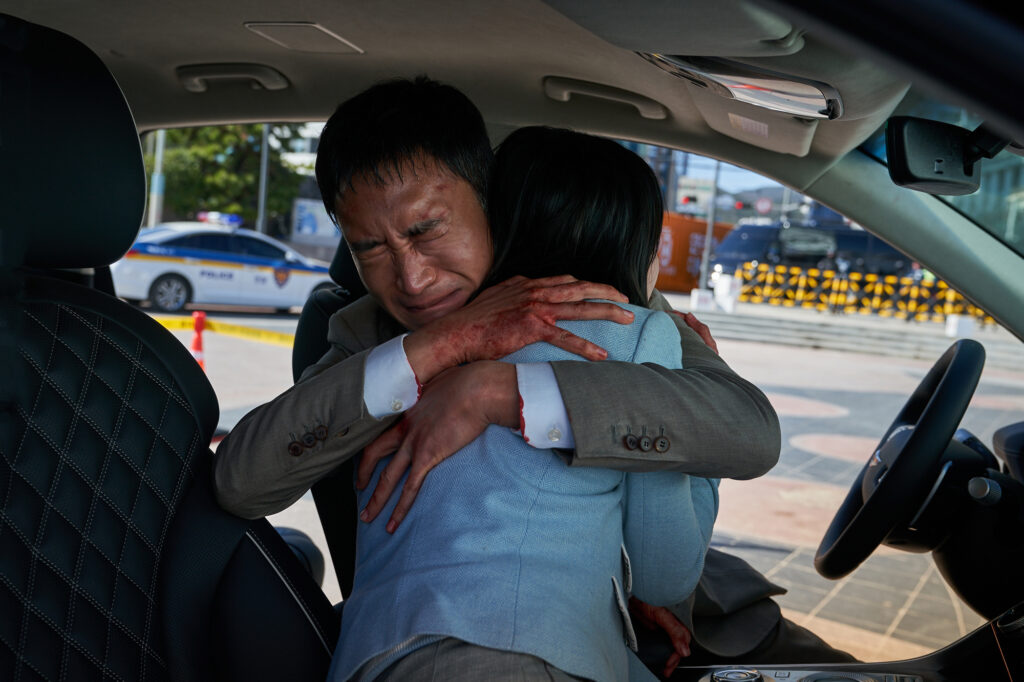 Before going into the movie, I was worried that they gave away too much from the trailers. And ultimately, I think it did give away too much, or more-so too much of the “good” parts. Because it gave so much of the good parts away in the trailers (hence, the first half or so), it gets loose after about an hour in. As the film progresses, it also gets a little too cringe and there were forced emotions. It was as if they were begging you to shed a tear, which makes even the tears that were going to come out, go back in. Very unnatural.

Moreover, the story itself was pretty generic and nothing too special or out of the ordinary. Long story short, predictable.

And I can’t not mention this because I think practically everyone that saw this movie, or even the trailers, would think this. And I can’t include this in the good parts, because it isn’t a good thing about the movie, but nor is it necessarily a bad thing. When watching <Hard Hit> you get the impression that this is a two hour long commercial for Genesis. I mean, I’m sure the Genesis GV80 was a product-placement, but it wasn’t just a regular PPL; it was literally like a prolonged, extended advertisement for the vehicle. That, and the city of Busan; an endorsement for those two things. 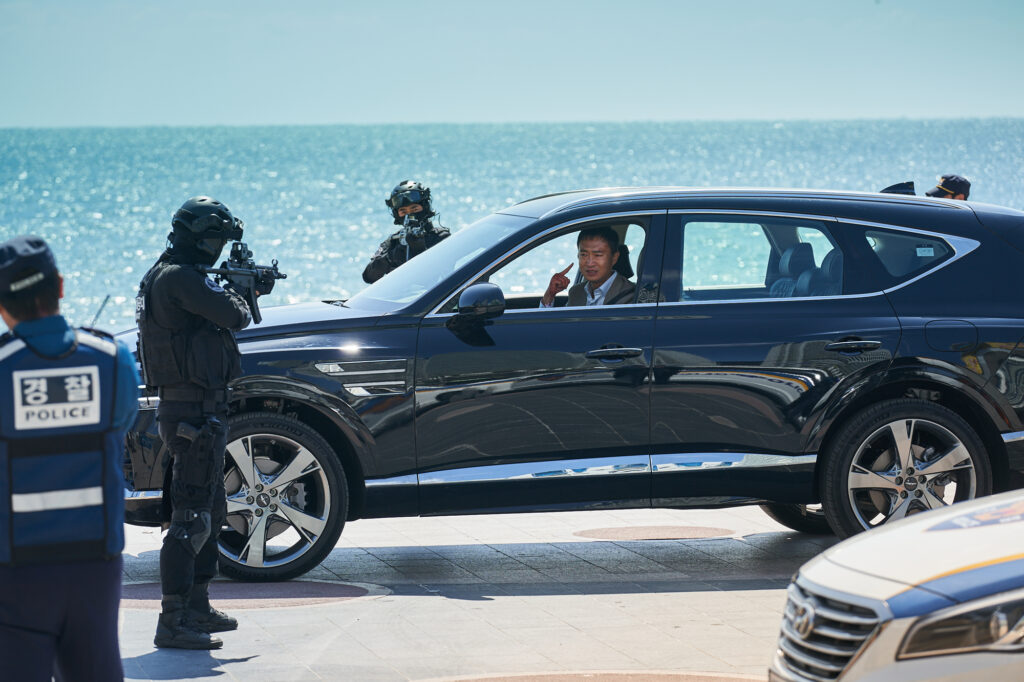 Overall, the movie was good for the first hour or so. There were lots of suspenseful moments and they were great when they were there. However, it gets loose after about an hour in, and there were forced emotions and was cringe as it progressed further into the story. The takeaway? Let’s buy a Genesis and plan a trip to Busan! (Jk) But with the limited action and thriller films we’ve had out of Korea, or I should say good ones, then this is up there in relative terms.