Hello everyone and welcome back to another post by EonTalk! Today, I’ve got the second part to the must-watch K-dramas on Netflix series. As mentioned in part 1, there’s been a lot of added Korean content on Netflix recently, but majority of them do not have English subtitles. Thus, I went through all K-dramas available on the Korean Netflix server, and spotted out those that do have English subtitles, and picked out 5 that I felt were definitely worth checking out.

Before getting into the list, please remember that the K-dramas I’ll be introducing in this post will be based on my personal preferences, and so are totally biased towards my opinions. There’s going to be A LOT that I won’t have included in today’s content, as there are so many great K-dramas, so if you would like another post going over even more K-drama recommendations, please let me know in the comments. Also, check out part 1 if you haven’t already, as there are amazing K-dramas in that post as well. These K-dramas are available at the time of recording on the Korean Netflix server, so it may not be available in the country you are in. However, I’ll explain later on in the content on how you can gain access to the Korean Netflix and a wider range of Korean content.

Starting off the list, the first K-drama is the most recently aired K-drama on this list, which aired from September of last year to October 2020, “Record of Youth.”

“Record of Youth” is an underrated K-drama in my opinion, especially with the amazing leads it had of Park Bo-Gum, Park So-Dam, and Byun Woo-Seok. I coincidentally ran across this romance drama because it was available on the Korean Netflix and I was looking for something new to watch, and I was hooked. With a total of 16 episodes, I binge-watched all 16. And no wonder why it was so good, as it was directed by Ahn Gil-Ho, who also did “Memories of the Alhambra” and “Stranger,” and written by Ha Myung-Hee. The drama is about the growth of the youth, who each strive to achieve their dreams in their own ways, while facing the tall barrier called reality. The relationship between Park Bo-Gum and Park So-Dam was really cute, and I thought they made a great couple.

Starring Jung Eun-Ji, Seo In-Guk, Shin So-Yul, Eun Ji-Won, Lee Ho-Won, and Lee Si-Eon, “Reply 1997” is a 16-episode-long show full of nostalgia, romance, humor, and so much more. Directed by the incredibly talented Shin Won-Ho, who also did the other “Reply” series, as well as the amazing “Playlist” series, and Park Sung-Jae, the writers of “Reply 1997,” Lee Woo-Jung and Lee Sun-Hye, also worked on the other “Reply” series alongside director Shin. I absolutely love the “Reply” series, and “Reply 1997” is the one that started it all. As the title makes clear, the drama is set in the year 1997, when 1st generation K-pop idols H.O.T. and Sechs Kies were the world and more for their stans, and a blast to the past full of retro and reminiscent events. As a 90s kid, this definitely hit home for me, and so much nostalgic hit while watching. There’s been lots of rumors and speculations of another “Reply” drama coming out, and if true, I’ll definitely be watching live. “Reply 2002” and/or “Reply 2006” would be amazing to watch, as 2002 is when the FIFA World Cup took place when Korea went to the semi-finals, and 2006 is when the 2nd generation wave of amazing K-pop groups began, including TVXQ, Big Bang, Girls’ Generation, Super Junior, and Wonder Girls.

Getting back to the list, the #3 K-drama is a Netflix original series that released in April of last year, “Extracurricular”.

“Extracurricular” is a K-drama that attacks social issues, but its approach is different. It’s more of a dark, teen, crime drama, and there may be scenes that some viewers may find disturbing, but I personally thought it was an amazing drama. Starring Kim Dong-Hee, Jung Da-Bin, Park Ju-Yeon, Nam Yoon-Su, and Choi Min-Su, “Extracurricular” is 10-episodes of full-out binge-worthy fun. Directed by Kim Jin-Min and Jin Han-Sae, the narrative is a revenge drama of a young man, who goes undercover as a member of an organization to reveal the secret behind his father’s death, and the harsh revelation of the truth in the process.

And now, just two K-dramas left. The #2 K-drama goes to another relatively older one that was broadcasted from July of 2015 to August of 2015, “Oh My Ghost.”

Don’t let the title scare you, “Oh My Ghost,” although it has “Ghost” in its title and does revolve around that topic, it couldn’t be more contrasting from the horror genre. With romance and comedy throughout its run, this series got me to absolutely fall in love with Park Bo-Young. She’s incredibly sweet and cutesy in this, and her partnered up with Jo Jung-Suk, the chemistry was incredible. The drama also featured Lim Ju-Hwan, Kim Seul-Ki, Park Jung-Ah, as well as one of my favorite supporting actors in both K-movies and K-dramas, Kang Ki-Young. “Oh My Ghost” was full of cute and humorous moments throughout its 16-episode run, and it was thanks to director Yoo Je-Won, who also directed “Abyss,” and “Hi Bye, Mama!,” and writers Yang Hee-Seung and Yang Seo-Yoon that the drama was such a great one. The story is about the relationships of and interactions between a timid assistant chef who gets possessed by a lustful virgin ghost, and a self-confident star chef. I’m sure you’ll be chessin’ it when watching this one.

And now, the #1 spot. The #1 K-drama I picked that’s a must-watch on Netflix is a series that shocked its audience right from episode 1. The #1 K-drama goes to the show that broadcasted from November 2018 to February of 2019, “SKY Castle.” 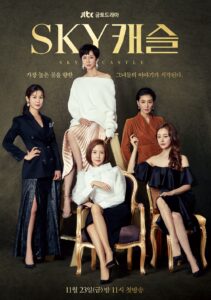 “SKY Castle” tackled one of the biggest social issues in the Korean society: education. Education in Korea is… let’s just say a mess for a lack of better words. With so much pressure and stress going to kids starting at a very young age to get into the prestigious, or so-called “in-Seoul,” schools, the whole education system definitely is in need of a major reformation. And “SKY Castle” attacked the issue head-on! The “SKY” in “SKY Castle” is a play on words, taking the first letter of the three premier schools of Korea, Seoul National University, Korea University, and Yonsei University, hence, making up the title “SKY.” Anyways, not only did this drama have a great social message, but also had amazing performances by Yeom Jung-Ah, Jung Jun-Ho, Lee Tae-Ran, Choi Won-Young, Yoon Se-Ah, Kim Byung-Chul, Oh Na-Ra, and Kim Seo-Hyung, and not to mention all the great actors and actresses that portrayed the students. This drama was directed by Cho Hyun-Tak and written by Yoo Hyun-Mi, and they’re both working on an upcoming drama titled “Snowdrop” that’s expected to air later this year, and so you know I’ll be watching this as well. “SKY Castle” is a real comic satire that examines the desperate desire of wives from prestigious families to raise their husbands as kings and their children as princes and princesses in SKY Castle, where the top 0.1% of Korea live together. With 20 episodes of the show available, I’m sure you’ll be entertained throughout its run!

And that concludes today’s content on 5 Must Watch K-Dramas on Netflix pt.2. Remember, these dramas were based on my personal preferences, and are totally biased towards my opinions. However, I’d love to hear your thoughts as well, so please leave a comment and share your thoughts on which are your favorite K-dramas. Remember, to watch these amazing films, be sure to sign up for ExpressVPN using the link provided to get your special price! If you would like me to continue making posts on not only Korean movies but K-dramas as well, be sure to let me know in the comments!