Hello everyone and welcome back to another content by EonTalk! Today, upon high request, I’ve got a post specially dedicated towards K-dramas. If you’ve been a follower of EonTalk, you’d know that I usually focus on Korean movies. However, I had a content before covering some K-dramas upon high demand, which you should check out if you haven’t already (here), and following that, I’ve decided to make a post specifically dedicated to my favorite K-dramas. Thus, in today’s content, I’ll be bringing you a list of 5 K-dramas that I believe are definitely worth checking out on Netflix.

There’s been a lot of added Korean content on Netflix recently, but majority of them do not have English subtitles. Therefore, I went through all K-dramas available on the Korean Netflix server, and spotted out those that had English subtitles. Then, I picked out 5 of which I felt were definitely worth recommending. That goes without saying that the K-dramas I’ll be introducing in this video will be based on my personal preferences, and so are totally biased towards my opinions. I know there are a lot that I won’t have included in today’s video, so I’ll have a part 2 coming soon, so please let me know in the comments if you want a sequel. Also, if you have differing views and thoughts, please feel free to respectfully leave them in the comments down below! These K-dramas are available at the time of writing on the Korean Netflix server, so it may not be available in the country you are in. However, I’ll explain later on in the video on how you can gain access to the Korean Netflix and a wider range of Korean content. Okay then, that being said, let’s get right into today’s list of 5 Must Watch K-Dramas on Netflix.

Starting off the list, the first K-drama is the most recently aired K-drama on this list, which aired from October of 2020 to December of 2020, “Start-Up.”

“Start-Up” is an inspiring romantic comedy that starred the leads Bae Suzy, Nam Joo-Hyuk, Kim Sun-Ho, and Kang Hanna. The drama ran for a total of 16 episodes, and was directed by Oh Choong-Hwan, who also directed “While You Were Sleeping” and “Hotel Del Luna,” and written by Park Hye-Ryun, who also wrote “While You Were Sleeping,” “Pinocchio,” and “I Can Hear Your Voice.” As the title makes clear, the story is about a group of young entrepreneurs who dream of succeeding in the ever-so competitive start-up industry in Korea’s “Silicon Valley.” The on-screen chemistry between the casts, especially Suzy and Nam Joo-Hyuk, is what stole the show for me.

Next up is a K-drama that has a genre of totally opposite characteristics. Airing from October 2014 to December 2014, the #4 K-drama is “Bad Guys.” 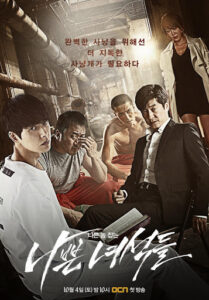 “Bad Guys” is characterized as a crime, action, thriller, and starred Kim Sang-Joong, Ma Dong-Seok, Park Hae-Jin, Cho Dong-Hyuk, and Kang Ye-Won. With a total of 11 episodes, “Bad Guys” was directed by Kim Jung-Min and written by Han Jung-Hoon. The drama is about a detective joining forces with a group of “bad” guys, who are criminals themselves, but trying to catch even worse criminals. “Bad Guys” was an absolute badass drama, especially with Don Lee aka Ma Dong-Seok aka the Korean “The Rock” rampaging through anything and anyone in his way.

Getting back to the list, the #3 spot goes to another relatively recent drama that aired from June 2020 to August 2020, “It’s Okay Not to be Okay.”

“It’s Okay Not to be Okay” is a quirky K-drama that also has elements of romance and comedy, and starred Kim Soo-Hyun, Seo Ye-Ji, and Oh Jung-Se. Seo Ye-Ji received massive popularity following this one, and although the drama itself didn’t receive as high reception in Korea as some of the other K-dramas on this list, it did receive immense international popularity. With a total of 16 episodes, “It’s Okay Not to be Okay” was directed by Park Shin-Woo and written by Cho Yong. The drama is a quirky romantic comedy about a fairy tale-like love between two individuals who, at first, couldn’t be more different, but as they develop their relationship, starts caring for and heal each other’s wounds. If you’re in for a strange but lovable romcom, this is the one.

This is another K-drama that I find that’s underrated in terms of international popularity. Speaking for just the Korean market, this was a major hit. Depicting the real life work culture of the Korean workforce, “Misaeng” was able to connect with the viewers on a very real, emotional, and empathetical level. Starring Lim Si-Wan, Lee Sung-Min, Kang Sora, Kang Ha-Neul, Kim Dae-Myung, and Byung Yo-Han, it’s with this K-drama that these actors really saw their acting careers take off. And it’s these guys’ acting that made the drama 10 times better. From the story to the acting to the details of the little things depicted in the show, I absolutely fell in love with this drama; and I was a student and not even working when I watched this. Directed by Kim Won-Seok, who did other amazing works such as “Sungkyunkwan Scandal,” “Signal,” and “My Mister,” and written by Jung Yoon-Jung, “Misaeng” revolves around the story of a new employee of a company being thrown into the harsh reality of corporate life, and all the responsibilities and tasks that comes along with being an employee of a corporation. There are a total of 20 episodes of “Misaeng” available, but I’m sure you’ll want more once you’re done with the last episode.

And now, the #1 spot. The #1 K-drama that I picked that’s a must-watch on Netflix is a drama that got me hooked from episode 1, and didn’t let go until its concluding episode. The #1 spot goes to the K-drama that aired from September of 2019 to November 2019, “When the Camellia Blooms.”

Okay, I know that romance and comedy are two genre elements that can be found a lot on this list, but hear me out. K-dramas are known to have great romcom shows, and sure, some may be overboard cringe, but that is definitely not the case with “When the Camellia Blooms.” This drama not only had great romance and comedy, but also action, thrill, emotions, and not to mention amazing, amazing acting by its cast. Starring Gong Hyo-Jin, Kang Ha-Neul, Kim Ji-Seok, Son Dam-Bi, and Kim Kang-Hoon, the on-screen chemistry between all of the cast in this was top-notch. I especially was impressed by child actor Kim Kang-Hoon’s performance in this. This 20-episode-long drama was directed by Cha Young-Hoon, who also directed “Don’t Look Back: The Legend of Orpheus,” and written by Lim Sang-Choon, who wrote “Fight For My Way.” The narrative revolves around a single mother who owns and runs a bar named “Camellia,” and a playful male who declares his love for the bar owner. I’ll leave it at that and won’t say more, as I don’t want to spoil anything, but just know that there’s so, so much more to the drama.

And that concludes today’s content on 5 Must Watch K-Dramas on Netflix. Remember, these dramas were based on my personal preferences, and are totally biased towards my opinions. However, I’d love to hear your thoughts as well, so please leave a comment and share your thoughts on which are your favorite K-dramas. Remember, to watch these amazing films, be sure to sign up for ExpressVPN using the link provided to get your special price! If you would like me to continue making posts on not only Korean movies but K-dramas as well, be sure to let me know in the comments!