To be completely honest, up until I saw the second trailer of this film, I was not looking forward to it; not one bit. It felt like a ripoff of an ordinary, cliché gun movie from Hollywood with a non-existent story. However, upon seeing the longer version of the trailer, I was hooked. The first trailer did not reveal the purpose of the action, and concealed itself of a huge plot point: “The King” of North Korea, aka Kim Jong-Un(?). Once the true target of the PMC (Private Military Company) “Black Lizard” was exposed, it felt as if the movie found its purpose and direction (all from just the second trailer). 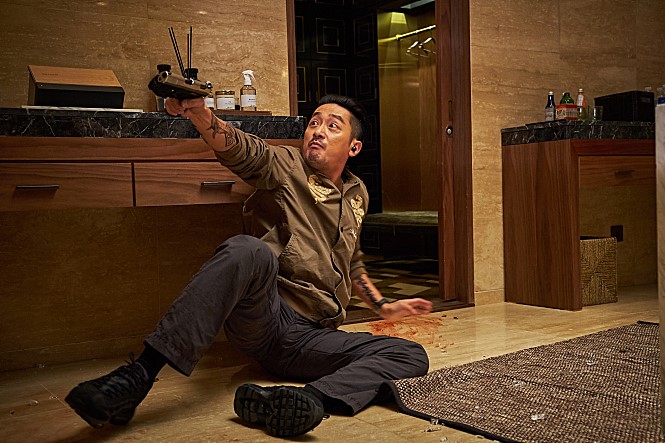 Directed by Kim Byung-Woo, who also directed the film <The Terror, Live> also featuring Ha Jung-Woo, <Take Point> was an action-packed feature with moments of suspense and intense battle sequences. The movie features two of Korea’s top actors, Ha Jung-Woo and Lee Sun-Kyun. Other than these two, majority of the supporting cast members are non-Koreans. The film relies heavily on English and foreign actors, as the PMC that the character Ha Jung-Woo is a part of (Black Lizard) is a non-Korean mercenary from America. Also, the title of the film in Korean is actually <PMC: The Bunker>, but they labeled the movie as <Take Point> in English. To oversimplify, the film is a hypothetical of the future, with a complicated relation between the US, China, and the two Koreas.

Ahab (Ha Jung-Woo), the captain of the Private Military Company known as “Black Lizard,” is assigned a project by the United States’ CIA with a huge profit. However, at a secret bunker 30 meters below ground located at the DMZ, the original target of the mission doesn’t show up; instead, North Korea’s “King” does. Captain Ahab quickly changes his plans and shifts his target towards the North’s King, a man with the biggest bounty in Asia. Accompanied with his 12 team members, Black Lizard is successful in capturing King. However, they are attacked by another PMC and bombarded by the CIA, leaving them in a huge crisis.

Despite Korea having some amazing feature films, there are two aspects that Korean cinema seems to never get right: English/foreign actors and special effects. Contrary to nearly every Korean film, <Take Point> did these two elements sufficiently well. If you’ve read a lot of my reviews, you know that I always complain about how the Korean actors’ English is just downright horrible majority of the time, and that the acting performances by the foreign actors is equally appalling. Nevertheless, <Take Point> had some proficient foreign actors. Unlike many Kfilms that have less-than-average skilled actors that seemed to be randomly picked just because of their skin tone, this movie had non-Korean actors that actually could act. Their performances didn’t seem unnatural or forced, but felt authentic. However, I can’t say the same about the other way around; the English by the Korean actors weren’t good.

Furthermore, the special/visual effects in this was exceptional compared to other Korean movies. Because Korean films do not have the large budgets that Hollywood features do, it’s extremely difficult to have the high-quality CGI effects that American films have. Therefore, it’s these effects that breaks the film’s action scenes a lot of the time. But this was not the case in <Take Point>. The special effects were amazing majority of the time, and was surprising to see the seamless integration of the effects into the movie. 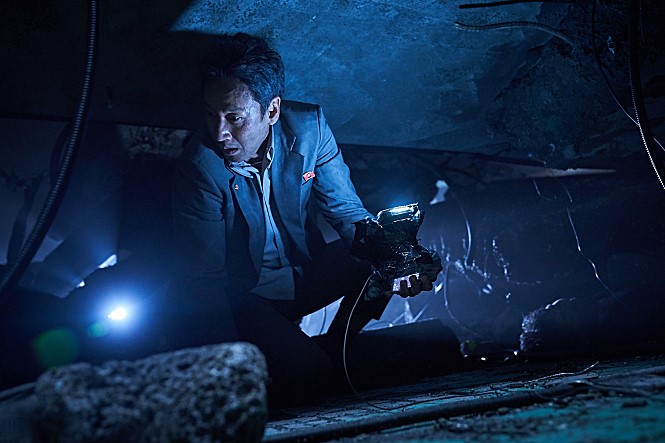 In addition, the action scenes gave great intense and suspenseful thrills each time. I could really put myself into the movie, and immerse with the action. It almost felt as if I was playing a video game. Compared to another action film that came out earlier this year called <The Negotiation>, this had drastically better action sequences and special effects.

There were several negatives of <Take Point>, despite it being a pretty decent action film. First, as mentioned before, English plays a huge part in this movie. And although the acting by the foreigners were good, the English by Ha Jung-Woo wasn’t. I mean, it wasn’t the worst; we’ve definitely seen worse. However, the accent and pronunciations were extremely unnatural. The script was great with American expressions that we use in everyday life, but combined with Ha Jung-Woo’s broken English? It made his acting seem… let’s just say less-than-good. I feel like Lee Byung-Hun would’ve fit the role well, as he has proven English productions under his belt, and not much is needed to be said about his amazing acting abilities.

Now, I’m not saying that perfect English is needed. But if you are going to have a character that speak predominantly English, and is supposed to be a natural speaker of the language, you should cast someone that could portray that role to its best. But as much as I love Ha Jung-Woo as an actor, his English was just not understandable a lot of the time. 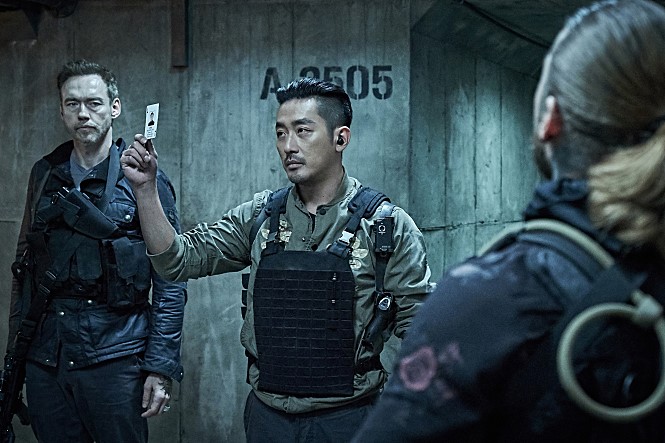 The other main actor of <Take Point>, Lee Sun-Kyun, also wasn’t the best in this. His acting felt over-the-top and ingenuine. For example, his North Korean accent didn’t seem natural. Furthermore, I did not like the cinematographic methods they chose for this film. The camera shakes around frequently, zooms in and out, and is all-around unstable. I understand that they were trying to depict rapid, intensive, and livid emotions, but it felt overdone and, on the whole, just makes the audience dizzy instead.

Moreover, I understand that some watch action movies for just the action, and place less focus on the story/its logicalities. However, as a movie reviewer, I cannot keep a blind eye towards how unrealistic it was and the numerous logical fallacies of the film. For example, they’re in a bunker with very limited phone signals, but they manage to have radio signals with the US from Korea even after a bombing took place. I won’t give any further details due to spoilers, but if you watch the film, you begin to think that what’s going on are impossible in real life. And it just keeps getting more and more unrealistic as the film progresses.

Some other minor negatives were its questionable musical selections, moments of cringe and scenes trying to force tears and be emotional, and a cheesy ending.

Overall, <Take Point> was a decent action film with great special effects unseen in Korean cinema. However, it comes with several unsatisfying aspects, and definitely could’ve been improved. It isn’t a must-watch, but if you are looking for some gun-shooting, action-packed suspense, you may want to check this out!