The synopsis is as follows:
Moo-Kwang is a model soldier that took on the role of a private chef of the Division Commander. His one and only goal in life was to provide for his wife and child. Then, one day, the Division Commander leaves on a business trip, and that’s when the dangerous temptation begins. The young wife of the Division Commander, Soo-Ryun, comes onto Moo-Kwang, seducing him and conflicting his goals and beliefs. Will Moo-Kwang be able to keep his morals, or will he fall for the seduction and temptation of the Commander’s wife, risking his military role, relation with his family, and basically his entire life?

The movie overall was a very quiet one. Now, this is neither a good nor bad; it’s just the tone of the film. The first 10 minutes or so of the film hardly had any dialogue, and I was a little afraid that the movie would end up not having any dialogue, but that wasn’t the case. But yes, in general, the film was on the quieter, less dialogue-heavy side; this is why the music and auditory elements played a crucial part for the movie.

The movie’s cinematography had a very… how should I put it… “unique” characteristic. At times, I really enjoyed the camerawork and the angles it provided. But then again, in other times, it left me asking why they would change tones with the cinematography like that… Mmm, but overall, I think I’ll give this a pass, which is why I included it in the good parts. 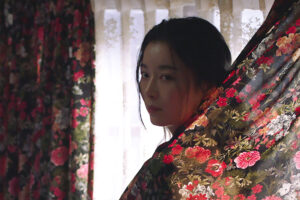 And the two parts of the movie being generally quiet and the uncommon cinematography gave this movie a vibe and tone of its own. There were parts with abnormal suspense and thrill, which derived from the two elements mentioned, and I’m pretty sure I haven’t seen a film like this, especially out of Korean cinema, in a very long time.

The sensual scenes, from an artistic standpoint, was… how should I say this… not very artistic. Films such as <The Handmaiden> did a superb job at showcasing the sexual scenes not only in a very erotic way, but also in a very beautiful way. From the way it was shot to the way it’s able to integrate it into the story and the overall movie was what made it incredibly great. However, this can’t be said about <Serve the People>. Maybe because the focus was too much on the intimate scenes and less the narrative, but wasn’t very satisfying for me personally.

And in relation to the narrative, there were some parts that were a little confusing. The movie overall felt like it lacked focus on the storyline, and felt like it jumped around in spots that ultimately wasn’t solved even when the ending credits came on.

Furthermore, the ending and the extra scene it had was a little weird. There was a pause in the scene, but that was really confusing… Was it done on purpose, or was there a screening error in the theater I watched at… If it was on purpose, it has me asking… “But why?” And that question came up very frequently throughout the duration.

Overall, <Serve the People> was a highly sensual movie with a unique tone to it. It had it’s own atmosphere, but it also had it’s own flaws as well. 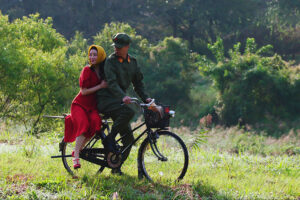