Hello everyone and welcome back to another movie review by EonTalk. Today, I’ve got the written version of the Korean comedy that released earlier this year: <Secret Zoo>.


<Secret Zoo> stars the likes of Ahn Jae-Hong, Kang So-Ra, Park Young-Kyu, Kim Sung-Oh, Jun Yeo-Bing, and Park Hyuk-Kwon, and was directed by Son Jae-Gon, who also directed <Villain and Widow> and <My Scary Girl>. The film is a comedy revolving around animals, more specifically a zoo that lacks animals, and so the zookeepers disguise themselves as the animals to attract customers.

‘Tae-Soo’ is a lawyer dreaming of becoming an M&A lawyer for one of the biggest law firms in Korea. While working as a contract worker at the firm, he receives an offer from one of the executive officers: To become the new director of a failing zoo that the firm acquired, and revamp the park. If he’s able to do so, he’s promised a position in the M&A team of the law firm. When Tae-Soo arrives at the zoo, he finds out that the park not only lacks customers, but animals as well. In order to liven up the zoo, he proposes to the zookeepers a very crazy idea: To disguise as and pretend to be the animals until they’re able to attain real ones. Thus, the team of five get specially-made costumes of a polar bear, lion, giraffe, gorilla, and sloth, and start pretending to be the animals. One day, as Tae-Soo is working as the polar bear, he gets extremely thirsty, and so drinks a bottle of Coke in the costume. What he didn’t realize was that there were people watching him! The word gets out that the zoo has a Coke-drinking polar bear, and goes viral. The zoo hits record-high sales, but what the team didn’t know was that there were other big challenges ahead of them.

The movie starts off pretty strong. It doesn’t begin as the light comedy you’d expect it to be. The middle part of the movie loses its identity, which I’ll get to later in the “bad” part, but it does pick back up around the climax for a short amount of time.

Also, the movie doesn’t have the most A-List stars in the cast (minus Kang Sora). But all are actors you’ve probably seen in other works as supporting actors. Ahn Jae-Hong was in the extremely famous K-drama “Reply 1988” and also starred in the recent film <Time to Hunt>. Kim Sang-Ho was the chilling villain in one of the best Korean thrillers <Man from Nowhere>. Park Hyuk-Kwon was in the other animal-related Korean film released this year <Mr. Zoo: The Missing VIP>, as well as the amazing 2017 film <A Taxi Driver> and the 2018 movie <Unfinished>. It was great to see these actors who usually play a supporting role, take on main lead characters. 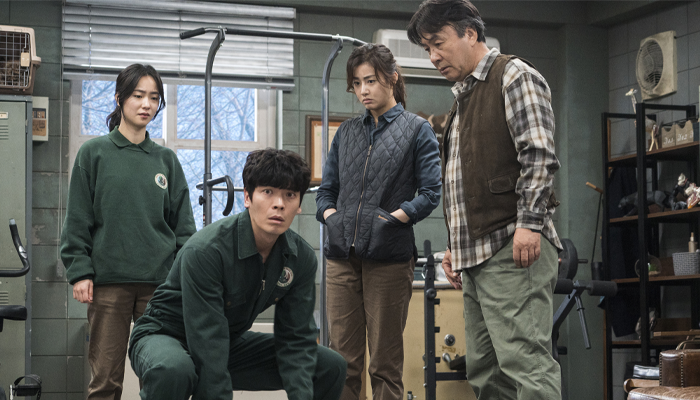 Moreover, I (and I’m sure others as well) thought the general premise of the movie was very unrealistic when watching the trailers. People disguising as animals in a zoo, and the customers actually believing it? Also, a sloth the size of a human being? Come on… However, the movie actually had pretty good reasons to make it seem believable. I’m sure a lot of people will turn away from the movie because of how unrealistic the story seems, but the movie actually made it sound, somewhat, possible (or at least for the first half).

Going into the bad part, the movie is categorized as a comedy, but the movie hardly had any genuine comedy. The humor it did have seemed very forced. I believe a comedic film should have continuous funny scenes with frequent humor, but <Secret Zoo> ultimately failed to keep my attention. It was more of a drama than a comedy.

Also, I mentioned above that the movie actually made the “unrealistic” parts seem realistic. However, this isn’t true for the entirety of the film. Once the polar bear starts to drink the Coke, the movie just falls apart in terms of being realistic. Furthermore, the movie rushes to end. It just slaps a “One Year Later,” and doesn’t really explain what went on in that in-between term, and has a forced ending.

And finally, the movie is very predictable. You can guess what’s to come, and it flows just like that. Although the movie has elements of being new in terms of zookeepers disguising as animals, everything else about it was very, very generic. A self-centered lawyer who cares only for himself, later learning to empathize with others? Sound familiar? There’s literally tens of hundreds of films with the same generic theme.

<Secret Zoo> has a new type of theme with a pretty good cast, but it’s just not that funny nor very entertaining. The film wasn’t funny, emotional, or educational, nor did it have a good story or story progression. There were two movies released in January 2020 with the overall theme of animals: <Mr. Zoo: The Missing VIP> and this, <Secret Zoo>. Both weren’t good, but if I had to choose one, I’d say the former was better than the latter. The movie sets the tone well in the beginning, but fails to execute as it progresses. I feel like it was almost a waste of the actors’ talents, as they could’ve done so much more with the potential they had with the cast.