Hello everyone, and welcome back to another movie review by EonTalk. Today’s movie review will be on the new action film out of Korean cinema <The Swordsman>.


Directed by Choi Jae-Hoon, who had his feature film directorial debut with this, <The Swordsman> starred the likes of Jang Hyuk, Kim Hyun-Su, Joe Taslim, Jung Man-Shik, Lee Na-Kyung, and Lee Min-Hyuk. As mentioned, the movie is an action film, and is full of great action sequences of sword fights. The movie is a historical piece revolving around a swordsman who is trying to get his daughter back from the people that took her. Let’s take a look at the detailed synopsis before getting into the review.

After the Gwanghaegeun of Joseon, ‘Tae-Yuk,’ the best swordsman of Joseon, goes into hiding. During this chaotic transition time of Ming-Qing dynasty, Tae-Yul wishes to live in seclusion with his daughter, ‘Tae-Ok.’ But as his eyesight becomes worse and worse, his daughter tries to find a treatment for his eyes. In the midst of this, Tae-Ok is captured by Gurutai. Now, Tae-Yul picks up his sword once again, and mercilessly fights his way to save his daughter.

First, the biggest positive of the movie is, you guessed it, the action. The action sequences were undeniably good, and you can tell the actors practiced a lot to execute their performances. There’s another film with sword fighting that was recently released, <Mulan>. Now, I haven’t seen this live action version of the Disney film, but from what I heard, the action sequences are really bad, and not even comparable to that of <The Swordsman>. If you’ve seen <Mulan>, let me know in the comments what you thought of it, and if you recommend it. I’ve been on the fence about watching it.

Okay, I got kinda sidetracked there, but to get back to <The Swordsman>, and the execution by the leads Jang Hyuk, Joe Taslim, Jung Man-Shik, and Lee Min-Hyuk were great. Jang Hyuk was an absolute badass in this, and fit the character very well. 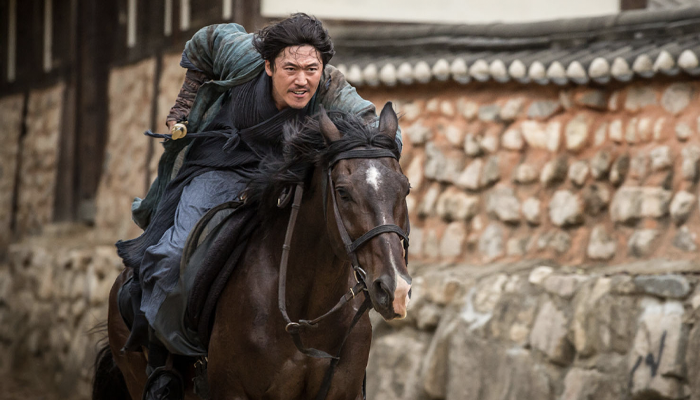 Furthermore, Joe Taslim is an Indonesian actor and martial artist who starred in the Indonesian film <The Raid> as well as the Hollywood film <Fast & Furious 6>. Being a foreigner in a Korean movie, I didn’t expect him to speak Korean in the film, but he did. And very well, might I add. His spoken Korean was really natural and good, and the older dialect or accent that’s required in historical pieces is hard for even Koreans, but he executed it very well. I was very impressed by his performance, both in speech and action.

Moreover, I liked the overall tone of the movie. <The Swordsman> was generally a very dark film. Even scenes in the daytime were gloomy and grimy, and I loved how they set the tone this way. The cinematography and coloring of the movie matched very well, especially with the time and circumstance the film was set in.

The main disappointment I had about <The Swordsman> was its story. There wasn’t anything too special about the story, and it actually started off pretty slow. It had a predictable ending, and I felt that the trailers gave away too many of the key scenes.

Also, the film wasn’t as action heavy as I thought it’d be. When the action came on, it was good, don’t get me wrong. However, for the first hour or so, there wasn’t that much action. Maybe it was because of this that the first half felt a little slow. Nonetheless, the action really picks up after about an hour in, and is enjoyable thereon out. 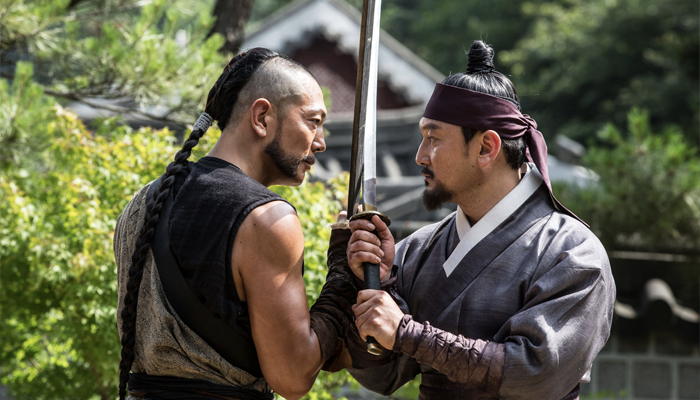 <The Swordsman> was like the Joseon version of <Taken>. A father going after his daughter and doing whatever he needs to, slashing away anyone in his way, to rescue his daughter. If you like action/martial arts/sword fighting movies, you’ll have a good time in this, and I recommend giving it a go. However, don’t have too high of an expectation, as it isn’t as high quality as what you might expect. It’s like a really good B-class movie, but I can’t say it’s up there as an A-class film. The action sequences were top-notch, though.