Hello everyone and welcome back to another Korean movie review by EonTalk. Today’s movie review will be on the crime action film <On The Line>.

<On The Line>, or its Korean title, <Voice>, is a crime film revolving around voice phishing scams, and I’m not sure as to why they decided to have a different English title from the Korean, as the Korean title is also in English… Nevertheless, both fit the movie and its narrative well, but I’ll refer to the film as <On The Line>, as that’s the official English title.

<On The Line> was directed by the twin “Kim” brothers, Kim Sun and Kim Gok, who also directed <White>, <Horror Stories>, and <Horror Stories 3>. The movie starred Byun Yo Han and Kim Mu Yeol as the main leads, and the film also had a strong supporting cast as well of Kim Hee Won, Park Myung Hoon, and Lee Ju Young. The film revolves around a man who falls victim to a voice phishing scam, and him tracking down the crime ring in charge of the scam and getting revenge.

The synopsis is as follows:
One seemingly average day, calls are made to the families and associates of construction site workers. Following these calls, several people fall victim to a horrible scam and they lose all their savings. One of those victims is, Seo-Jun, a former detective who’s now working as the head of the construction site that was targeted. In order to retrieve back the 3 billion KRW that he and his colleagues lost and get his revenge, Seo-Jun starts tracking down the core of the voice phishing scam. He succeeds in infiltrating the call center, which is located in China, but he discovers that the scam involves much more than he expected. From collecting personal private information to composing scam scripts, cash withdrawals and currency exchange operations, the scale of the scam organization is highly systemized. And there, he meets the man behind the voice that scammed him, and his revenge begins.

Right off the bat, Kim Mu Yeol was absolutely incredible. He fit his role so well, and made it really believable that he was a con artist. I can’t say that all roles were good fits, or that all actors gave their best performances, but I can for sure say that Kim Mu Yeol was extraordinary. He’s an astounding actor and his performance in this was the best I’ve seen of his in recent years.

Stepping back a little and looking at the film on a more macro sense, <On The Line> is about an ex-cop taking revenge. Does that sound familiar? <The Man From Nowhere>, <The Chaser>, and <I Saw The Devil> all have a similar overall theme. Of course, there are numerous differences and identifying details that make each movie what it is, but they all fall under the umbrella of ex-authority going after evil and getting revenge.

And zooming in on a micro sense, this is a small detail but the opening title sequence left a noteworthy impression on me. It was like an American crime drama series opening, with its text, music, and transitions. Moreover, there were a few chuckle-worthy points in the film, but overall the movie didn’t have much humor. 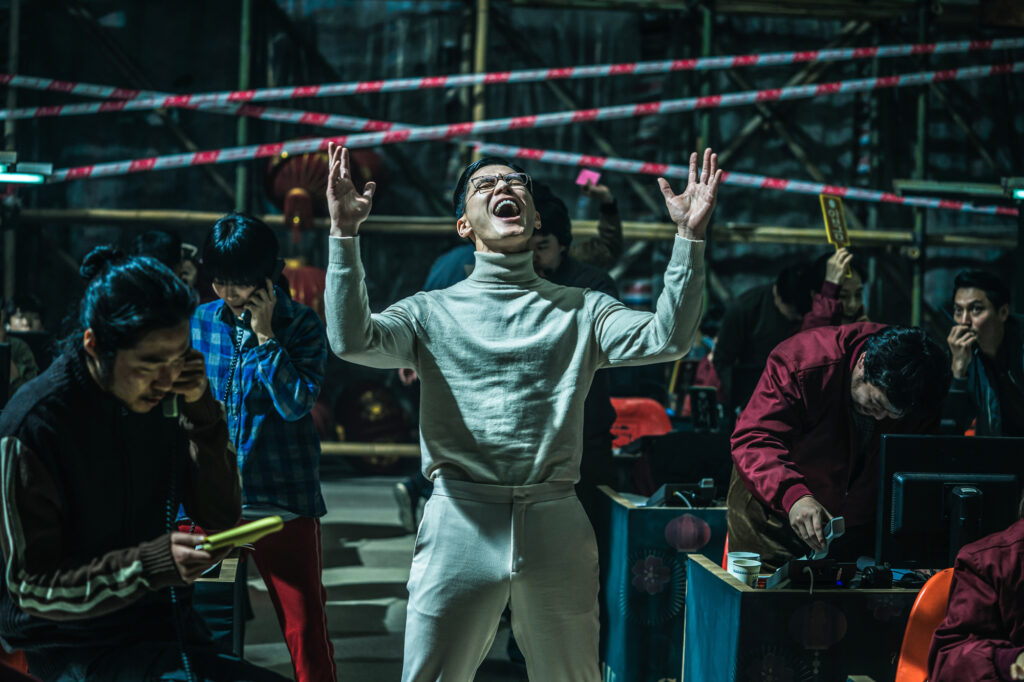 And most importantly, <On The Line> does an incredible job showcasing in a very realistic way how voice phishing scams take advantage of vulnerable people during unstable states. It’s extremely cruel. There’s a quote in the film that goes something like “Let’s show them a taste of hell,” and this is quite literally the case, as the scammers display a short glimpse of happiness and joy to the victims, but it’s actually cold-blooded evil in disguise. Extremely cruel and gruesome, and makes you wonder how a human being can do such wicked acts to another human. The scary thing is, this is all true and happening in real life. There are victims every day of these scams every day.

With about 30 minutes left, the movie kind of goes south all of a sudden. It felt like they rushed to conclude, which is quite unfortunate because I feel like what they were able to accomplish prior was quite good. Nevertheless, I will also say that the overall progression was on the faster side. A sequence, after a sequence, after a sequence, without much deeper engagement. So I guess that’s why it felt like the movie rushed to finish even more, since the overall momentum of the film was on the quicker side.

Furthermore, it’s sad to say, but the ending was pretty unlikely, or very unlikely. However, with a movie like this, a hopeful ending and conclusion is almost kind of necessary. It’s just that it’s probably really unlikely in real life that victims will get their money back in whole. 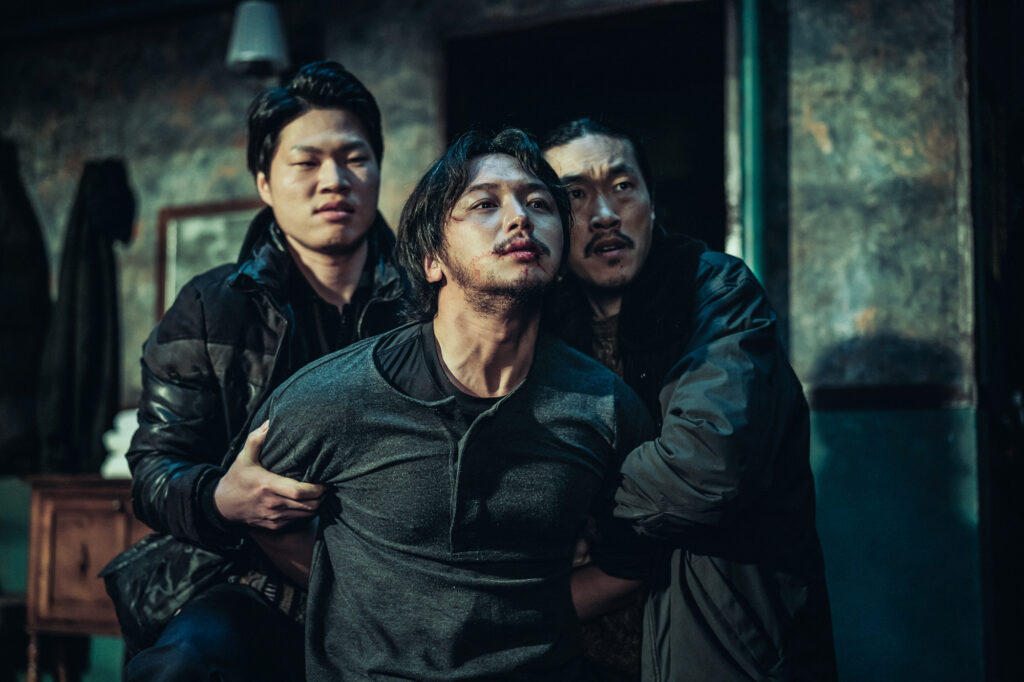 There were also other parts that didn’t make sense. Minus small details, there were also parts that had me questioning some parts, like how Korean cops are taking the lead, especially when entering the call center building, when they’re in China. Shouldn’t the Chinese authorities be in charge?

And lastly, I said Kim Mu Yeol was incredible, but I can’t say that all casting were good. Most notably, Park Myung Hoon. Park Myung Hoon had his breakout performance in <Parasite>, who played the man that lived in the basement of the Park family’s home. He has a freaky look in his eyes, which shined in <Parasite>, and he had it partially in this as well, but it wasn’t half as notable. Personally, I think it was a missed casting call with him, as we weren’t able to see him at his full potential. He didn’t leave a big impression in this, and was like a comedic/parody character from <No Country For Old Men>. 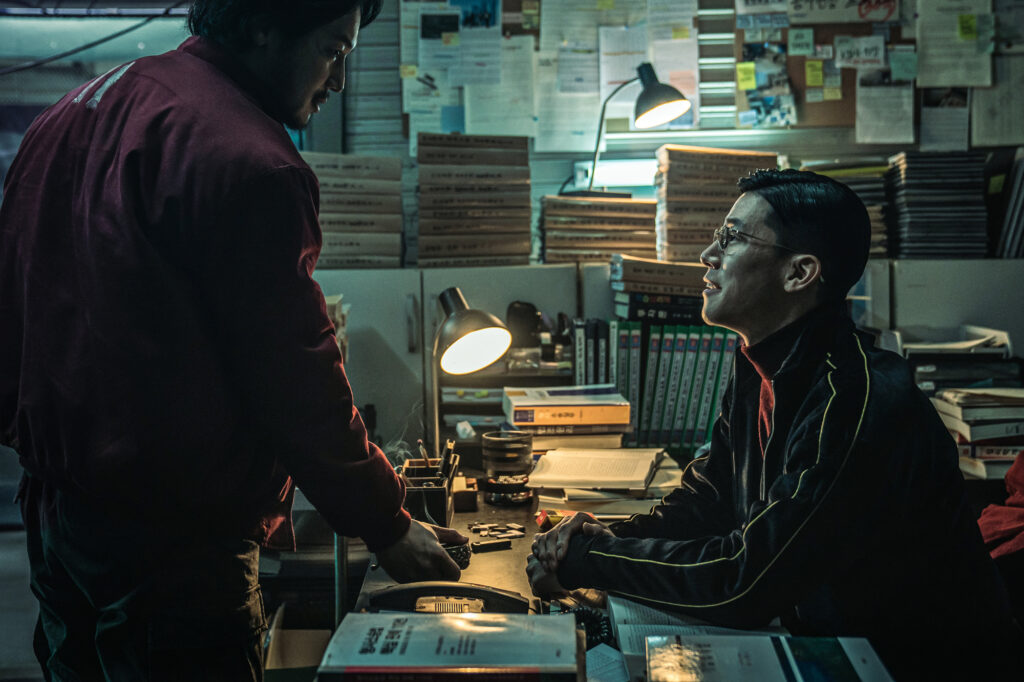 Good action, thrill, an intriguing storyline, and suspenseful moments were all found in <On The Line>. Movies like these are needed to raise awareness. The more aware people are, the less victims there will be falling for voice phishing scams. If the movie helped prevent even one more person from falling victim to these scams, one less victim, then I say job well done. If you are a fan of crime actions, or the main leads Byun Yo Han and especially Kim Mu Yeol, I recommend giving this a go.