Hello everyone and welcome back to another post by EonTalk! 2020 has been one crazy ride, and the coronavirus pandemic is still ongoing. I sincerely do hope everyone is staying safe out there and staying alert and informed! Although things are starting to look a little bit better and better, day by day, it’s important that we we keep our distances from others until situations are resolved. Today, I thought it’d be interesting to go over some Korean films that revolve around similar situations that we are facing today, and are, in my opinion, worth watching during social distancing to pass along the time.


As with my other previous recommendations content, I’ve compiled a list of movies that I believe are definitely worth checking out, and will be explaining some basic background info regarding the films, giving a short synopsis/description of the movies, but won’t be giving any in-depth reviews. This list consists of 6 films I recommend, in no particular order, and are totally subjective to my biased opinions. Not all of these movies are necessarily “disaster” films, but are movies with a general premise of state of emergency. By no means am I recommending these movies to reflect reality or the reality of current situations, but I just thought it’s interesting how movies portray state of emergencies.

If you have differing views and opinions, please respectfully leave them in the comments, and if you join the EonTalk Telegram group, you can further discuss Korean movie-related topics with a lot of K-film enthusiasts. Now then, without further ado, let’s get into the list! 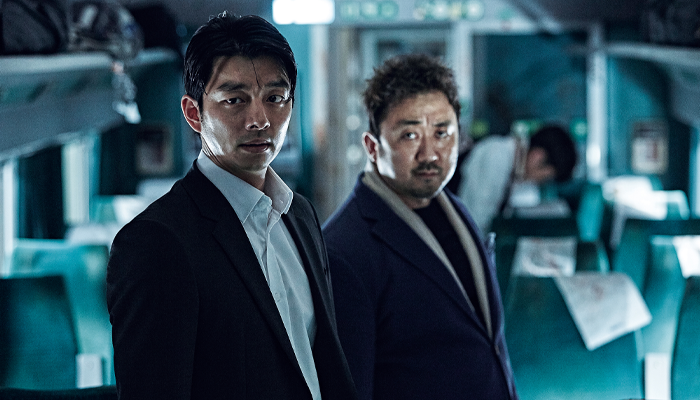 The first movie on the list is a movie I’ve recommended multiple times, as it’s one of the most globally recognized Korean movies: <Train to Busan>. <Train to Busan> is a zombie film that was released back in 2016, and played a crucial role in placing Korean cinema on a global scale. The film stars the likes of Gong Yoo, Jung Yoo-Mi, Don Lee aka Ma Dong-Seok, Kim Soo-Ahn, Kim Eui-Sung, Choi Woo-Shik, and Ahn So-Hee, and was directed by Yeon Sang-Ho, who also directed the follow-up to <Train to Busan>, titled <Peninsula>. Although <Train to Busan> may not seem very related to the current situations we are facing today, it has probably crossed your mind at least once the thought of the virus being a zombie-virus. No? It may be just me, but my imagination has led me to ponder the thought.

The synopsis of the movie is as follows:
A state of emergency is announced as an unknown virus spreads throughout South Korea. On a train bound for a southern city of Korea, known as Busan, that’s also known to be a safeground from the virus, various circumstances arise. What seemed to be a normal train ride, turns into a 442km battle of survival. 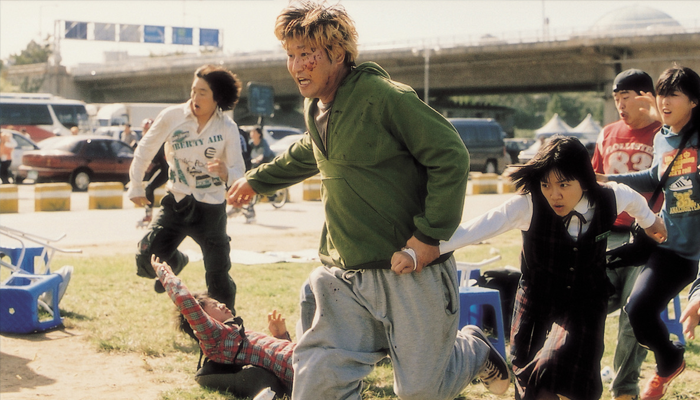 The next movie is the oldest film on this list. Directed by the 4-time Oscar winner Bong Joon-Ho, <The Host> is a must watch for those that love suspenseful Korean movies. Bong Joon-Ho, who won the Oscar for Best Directing, not only directed the 2019 Best Picture, Best International Feature Film, and Best Original Screenplay, <Parasite>, but also has other incredible works under his name, such as <Mother>, <Memories of Murder>, and <Okja>. <The Host> was the first Bong Joon-Ho film I’ve seen, and stars the likes of Song Kang-Ho, Byun Hee-Bong, Park Hae-Il, Bae Doo-Na, Go Ah-Sung, and Oh Dal-Soo. Again, <The Host> doesn’t really have direct correlations to the pandemic faced today, but it portrays a state of disaster in a way that only Bong Joon-Ho can show.

The synopsis of the movie is as follows:
Kang-Doo witnesses an unusual scene on the Han River amongst a group of people huddled together: An unidentifiable “thing” dangling from a bridge on the river. Fascinated by the scene, people start to take pictures. But not for long… This unidentifiable “thing” is a monster that suddenly comes on-land and starts to attack the people. The once peaceful Han River Park suddenly turns into chaos, and Kang-Doo, realizing the severity of the situation, runs away with his daughter, Hyun-Seo. However, amidst all the ongoing chaos, Kang-Doo loses the hands of his daughter, and the monster takes Hyun-Seo and disappears. The sudden attack of the monster leads the Han River Park to be closed, and the entire city falls into a catastrophe. With his world turned upside down in a matter of a day, Kang-Doo must find and save his daughter. 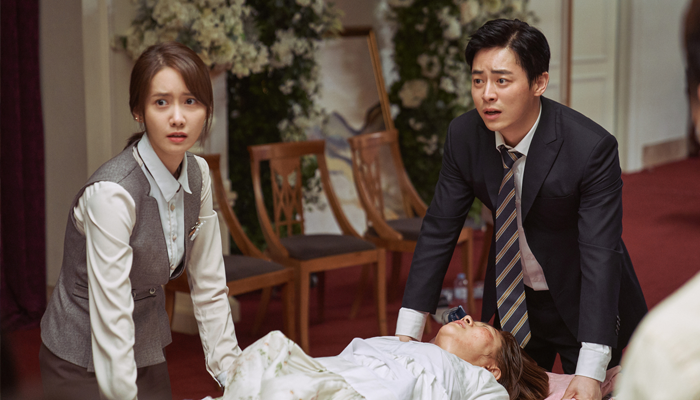 The third movie is the most recently released movie on the list, and is another film that I recommended a few times before. The third movie is <Exit>, starring Jo Jung-Suk, Yoona of Girls’ Generation, Go Doo-Shim, Park In-Hwan, Kim Ji-Young, and Kang Ki-Young. This action-comedy was directed by Lee San-Geun, and no, the movie isn’t based on a virus, but more of a terror attack. This is the only comedic film on the list, and I’ve also made a movie review of the movie as well, so be sure to check that out!

The synopsis of the movie is as follows:
Yong-Nam, an unemployed male, meets a college junior of his, Eui-Ju, at his mother’s 70th birthday party. During the event, a huge explosion occurs, and the whole city starts filling up with toxic gas. Yong-Nam and Eui-Ju help everyone escape, but the two fail to get on the rescue helicopter. Now, the two must do whatever it takes to escape the gas attack, and get to safety. 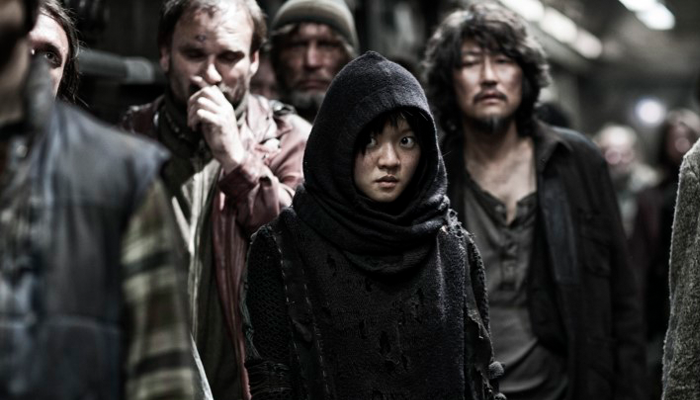 Moving along, this next movie is another film directed by the one and only Bong Joon-Ho, and features a cast lineup of mainly Hollywood actors: <Snowpiercer>. Released back in 2013, <Snowpiercer> is another masterpiece by Bong Joon-Ho that takes a look at social classes and inequalities that exist between the different classes. Starring Chris Evans, Song Kang-Ho, Ed Harris, John Hurt, Tilda Swinton, Jamie Bell, Octavia Spencer, Ewen Bremner, Alison Pill, and Go Ah-Sung, I’ve included <Snowpiercer> on this list after thinking about what would happen if majority of mankind was swept, and only a handful were left to survive. A dark thought? Perhaps; but <Snowpiercer> is a great portrayal of what that exact thought may look like.

The synopsis of the movie is as follows:
In a world where everything is frozen due to climate change, a train with survivors onboard endlessly runs. The tail-end of the train resembles the slums, as its residents suffer from hunger and the cold. On the other hand, the head of the train is occupied by the “select few,” who enjoy life with drugs, alcohol, and other luxuries. In this severely divided train that’s been running for 17 years, the young leader, Curtis, begins the riot he’s been planning for years.

These next two movies are closer in theme to what we are facing today, and are films that I think didn’t receive much international attention. 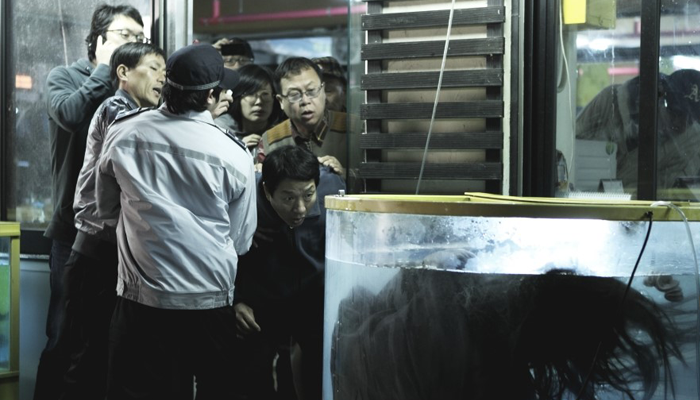 First, the 2012 film <Deranged>, starring Kim Myung-Min, Moon Jung-Hee, Kim Dong-Wan, and Lee Ha-Nee. <Deranged> was directed by Park Jung-Woo, who also directed <Pandora>, and is about a parasitic worm that creates a world of chaos. The movie is different in that the source of the catastrophe isn’t a virus, but rather a parasite, but this was the first movie that came to my mind when preparing this list. <Deranged> is a movie that I very much enjoyed watching, but haven’t seen a lot of people recommending or say that they have watched. However, the movie gets you to really think of the situation and ask “What if that really occurred in real life?” much like how the situation today could be made into a movie…

The synopsis of the movie is as follows:
As dawn breaks, multiple bodies are found floating on a river. Following this, a series of more corpses are discovered in a similar manner throughout the nation. CCTV footage shows that these people jumped into the water themselves, as if they were crazy. As more and more cases of similar nature arise, the government tries to get a hold of the circumstance, but fails to contain the situation. Experts discover that the cause of this madness was due to a new parasitical horsehair worm that, once infected, causes the person to become extremely hungry and thirsty, until eventually, they jump into large bodies of water due to severe dehydration. In the midst of this, Jae-Hyuk discovers that his wife and kids are infected, and he tries to find a cure for the problem. 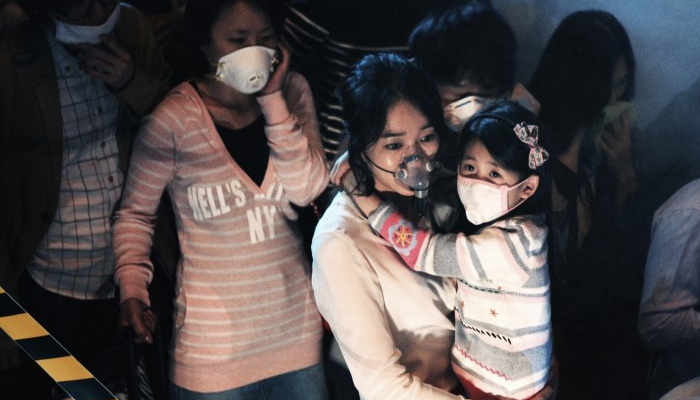 And the final movie of today’s video, <The Flu>. This is the most similar film as to what we are facing today; almost eerily similar. Yes, the movie does extend the situation to the worst-case-scenario, but it’s scary to think what if the pandemic of today wasn’t controlled and got out of hand to this extent. The possibility is definitely a scary one to think about, and <The Flu> does a great job at showing that possibility in a movie-format. Directed by Kim Sung-Soo, who also directed <Asura: The City of Madness> and <Beat>, I saw <The Flu>, as it popped up on my recommendations list on Netflix as this whole pandemic started to take place several months ago. The movie went under many people’s radar, as it was released in 2013, but only got to see the light of day recently. The film stars the likes of Jang Hyuk, Soo Ae, Park Min-Ha, Yoo Hae-Jin, and Lee Hee-Jun.

The synopsis of the movie is as follows:
An extremely powerful respiratory virus that has an infection rate of 34 thousand people per second and a death rate of 100% spreads throughout Korea, and in order to contain the virus so that it doesn’t spread globally, the government declares a state of emergency. As the situation doesn’t seem to get better, the city is placed on lockdown, and closed off from the rest of the nation. With no way of getting out, and not getting the necessary help, chaos arises with the isolated people, and the fight for survival begins.

That concludes today’s blog post! Thank you to everyone that read till the end, and if you have any other movies you feel could be added to this list, please let me know in the comments! As with everyone else, I’m also continuously looking for more movies to watch as I stay at home, so please recommend any great films you have enjoyed! Remember, you can always join the EonTalk Telegram group to further discuss with me and other Korean movie enthusiasts. Stay safe out there everyone, and I’ll see you in the next one!